A fast, fun, cyclocross race bike for those who want high performance off-road whether for racing or general riding

Some time ago, I posted my first look and impressions on the Genesis Vapour Carbon CX 30 cyclocross race bike, which you can read here: https://girodilento.com/genesis-vapour-carbon-cx-30-first-ride-review/ and see more close up images of the bike. 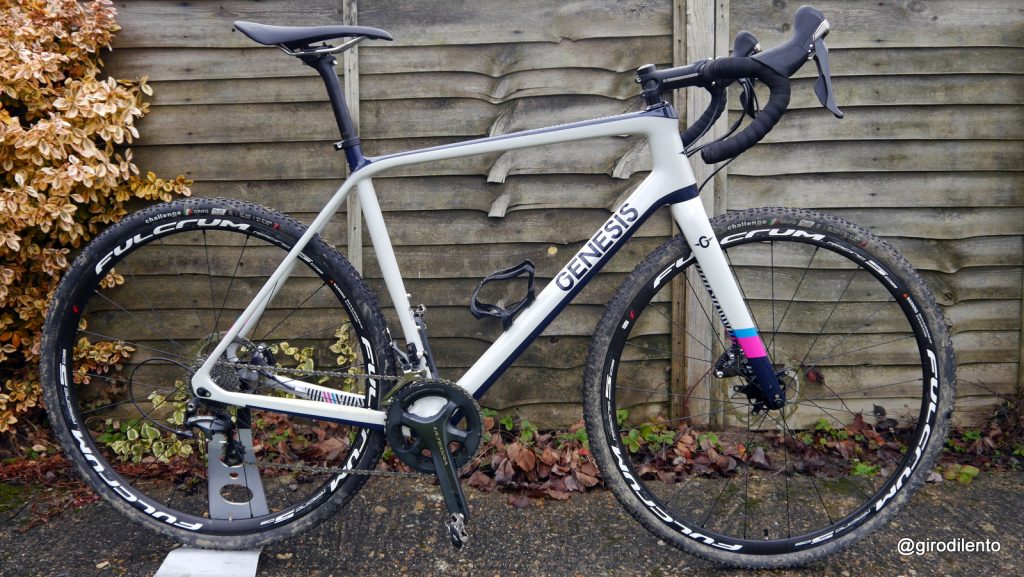 After spending more time riding the Genesis Vapour Carbon CX 30 cyclocross bike, I’ve come away with a very positive impression. It absolutely delivers on its’ design brief as a high performance cyclocross bike and if you’re looking for something carbon to race in the season to come, you should absolutely check the Vapour CX range out. It’s full carbon frame and fork feature flat mount disc brakes, internal cabling, through axles, 1x groupset compatibility and all contribute to it being right up to date with the latest standards and features.

The top of the range model I had features a full Shimano Ultegra hydraulic disc brake mechanical groupset, which performed faultlessly during my test period. In fact the whole build performed perfectly despite me crashing it (literally sometimes) over some of the roughest bridleways and off-road paths I could find. The Fulcrum wheels, whilst not the lightest, are strong and stayed completely true during my time with the bike, the Genesis finishing kit also performed perfectly. Again whilst it’s not the lightest, I’ve always been really happy with the quality and performance of Genesis finishing kit. It’s well designed and does a great job. The Challenge Grifo tyres also rode well and helped give the bike a touch of comfort in what’s undeniably quite a stiff platform. I managed to slice one open on a ride across country – but that’s not the fault of the tyre, more where I happened to be riding. The complete bike I had in size Medium was 8.6kgs so it’s not a featherweight but in fairness, that’s never been something Genesis have been aiming for. If you were racing, you’d probably put some lighter and possibly tubular wheels on to get a bit more snap for racing but the Fulcrum Racing 5 DB rode well. 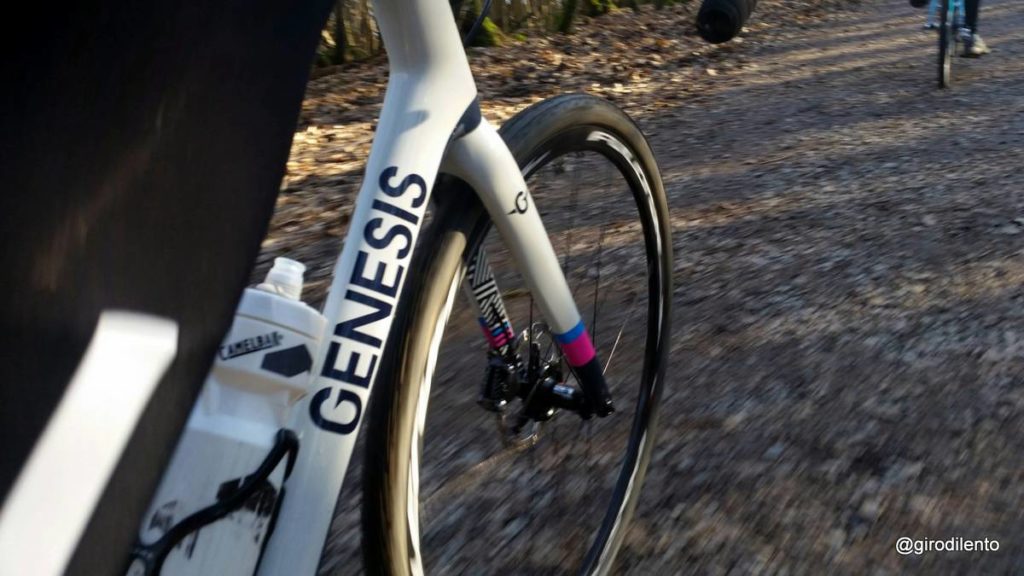 As I mentioned in my first look review, Genesis have also done a great job on the Vapour Carbon CX with the aesthetics. Whilst you might not think white would be the best colour for a bike that will probably spend a lot of time in the mud, the paint scheme on the bike is lovely, with lots of nice pink and blue detailing. If you look at the Vapour Carbon CX range – all of the colour options are terrific (to me at least). So it’s just a matter of picking the budget/colour/spec you like best. All models feature the same frameset, so you’re not losing anything if you choose a cheaper model apart from the change in groupset.

I’m not a cyclocross racer but I showed the bike to a few people I know who are. They were all really interested in this bike, partly because it looks great and partly because they were interested to see Genesis jumping into this market place. All of them gave the bike a good look over and I was repeatedly told what a good job Genesis look to have done with the frame shaping to help the bike get through the mud and not get too clogged up. 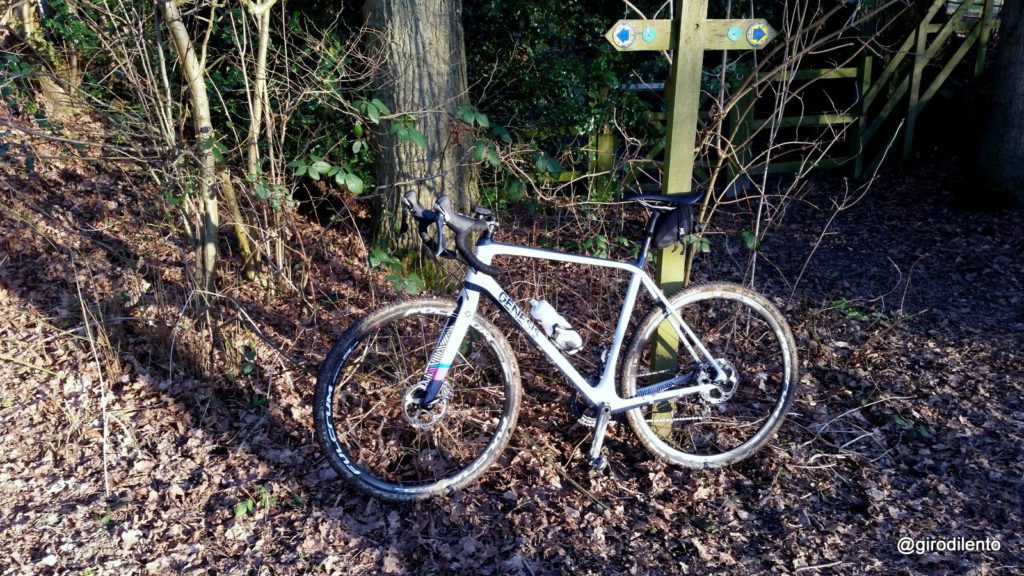 Whilst I don’t race, I enjoy performance bikes and getting as much out of them as I can. To me the Vapour Carbon CX delivered a fast engaging ride. It’s a stiff frameset most definitely but running 33mm cyclocross tyres, the ride was just softened enough to make it comfortable enough for multi-hour bridleway rides. As I mentioned earlier, I found that cyclocross tyres with their wider width and lower pressures than road tyres, added just enough comfort to balance the stiff frameset and they did this very well to deliver a nice balance of comfort vs performance. I did try a few rides with 28mm road tyres but my conclusion was that the bike was better with cyclocross tyres.

The stiff frame and race geometry also translate into the bike being a great climber off road. One of my local cyclocross routes has a very steep climb that its about 200 metres long and on the Vapour I found I could get up this more easily than I expected. The bike delivered good traction and I found it easy to keep the bike climbing up challenging slopes.

The Genesis geometry with shorter reach and longer trail worked well and helped the bike ride well over rough ground, although I still managed to crash it a few times (sorry Guys!) 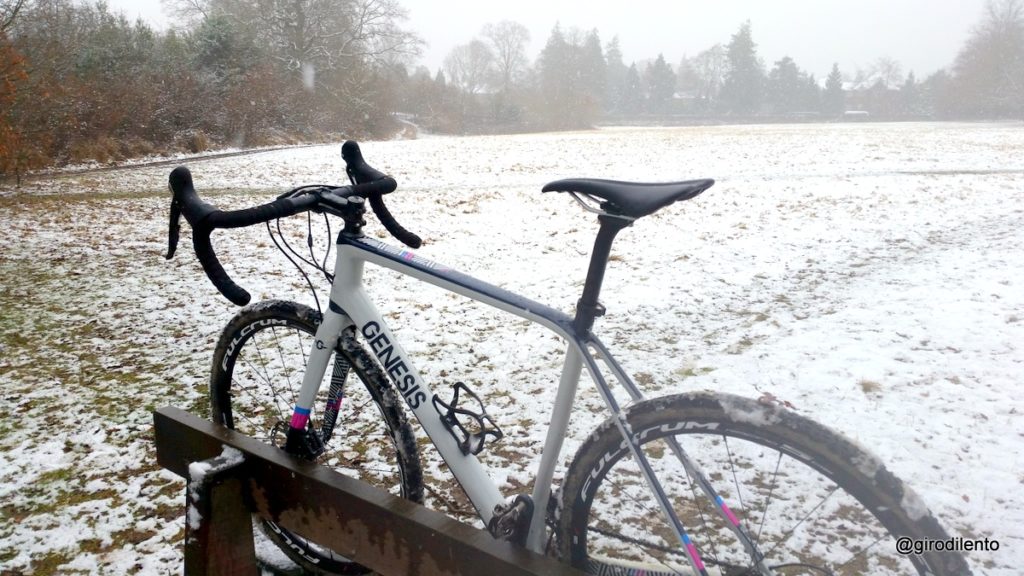 I’m a big fan of the through axles on this bike – 12mm front and rear. They felt like the right standard and helped keep the bike feeling taught and composed on all terrain. It could be a placebo effect but compared to my Trek Crockett which has a 15mm through axle front and a QR rear, it felt more tightly bolted together to me with through axles at both ends (but I could have been imagining that).

It makes sense that Genesis would add this bike to their range – it follows on well from the Madison Genesis Road team and combines the experience of building road race bikes with the brand’s long experience off road. I think the Vapour Carbon CX also makes sense in that, yes you could choose a Datum because you can run wide tyres on it, but that’s more of an Endurance Road frame, which whilst an absolutely terrific bike (one of my favourites), isn’t as focused in it’s purpose off road as this bike is. To me, this bike is the cyclocross version of the Genesis Zero Disc. 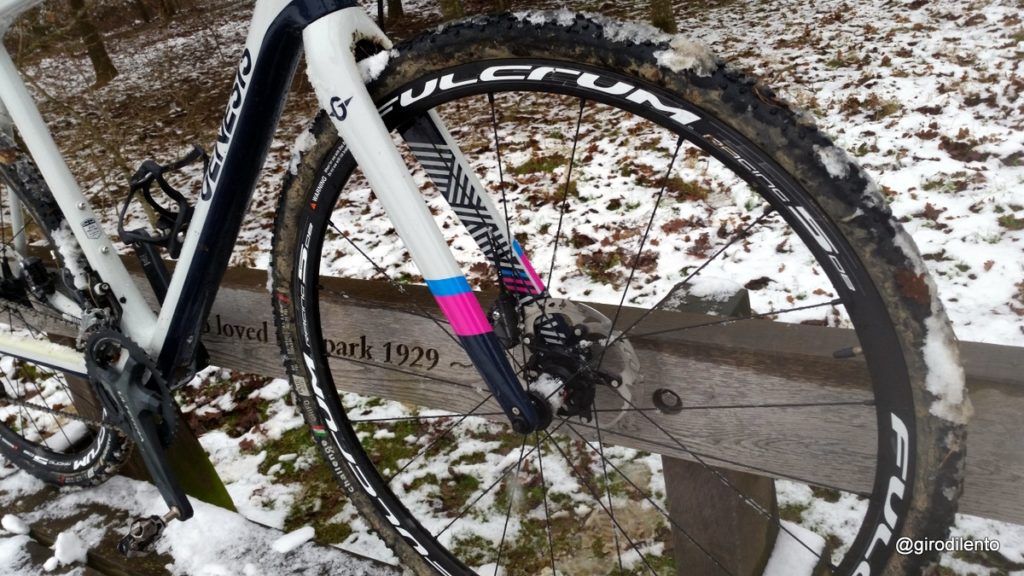 The Vapour Carbon CX is a carbon cyclocross race bike that’s bang up to date on design, is stiff, fast and fun to race or to ride off road. As well as racers, I think the bike will to appeal to those riders who want more performance off-road, even if they don’t race (or race much). If you want a carbon cyclocross bike that offers a lot of performance and is a blast to thrash through your local woods and bridleways, then the Genesis Vapour Carbon CX is definitely a bike to seriously consider.

This is another bike that shows Genesis at the top of their game right now and it most definitely delivers on its purpose to claim a well clearly defined and well deserved  place in the range.

You can  find out more here: http://www.genesisbikes.co.uk/bikes/cyclocross/cyclocross

And as I mentioned, my first look review is here:

I was asked following publishing the review if I had any extra photos showing mud clearance at the rear and here they are. I should also add, I’ve seen several people racing these bikes in the London Cross League in the winter of 2017/18 and they look to be getting on well with them. This is a bike I enjoying riding and reviewing 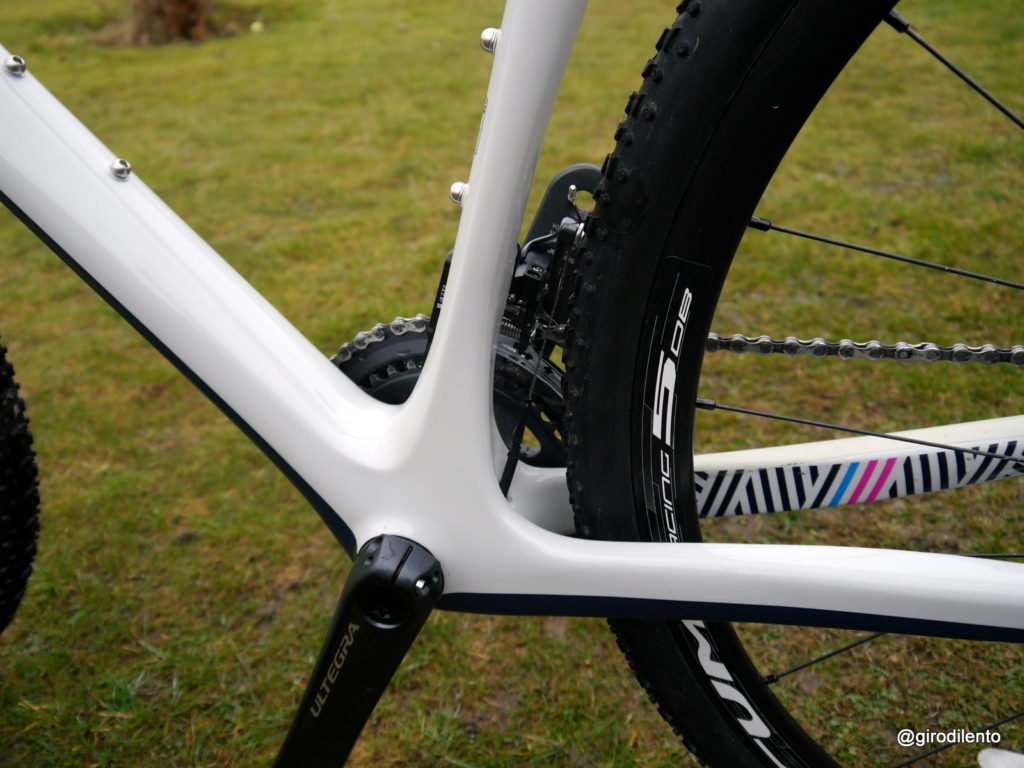 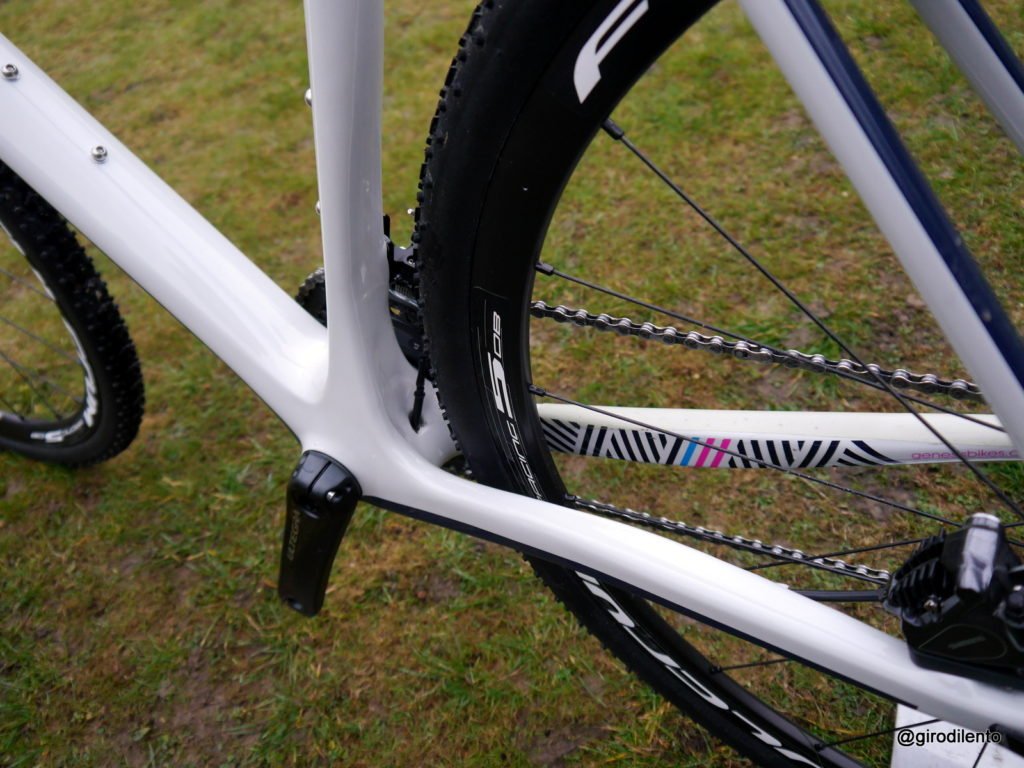 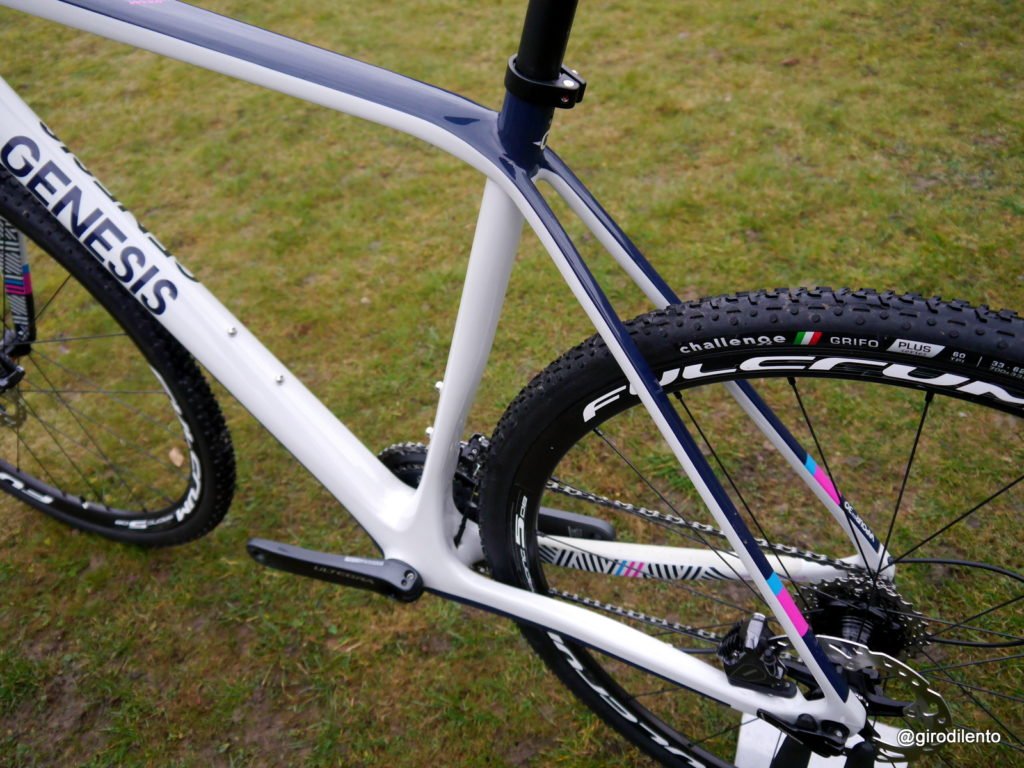