Another show that’s a regular in my calendar is UK Distributor Madison’s IceBike show. This recently held show is a chance for Madison to showcase the brands it works with and the product range that it’s taking to market in the UK at this point in the year. From a bikes point of view, there’s not normally a huge amount of new stuff to see as the Madison bike brands launch their new ranges in late summer. However, there are always some interesting new products on show and it’s a great opportunity to catch up on where some of the key brands are in their product cycles and how they’re seeing the market evolving (often with some insights into what might be coming later in the year).

Most of Shimano’s new products have been previously announced and written about with the new Dura Ace being a good example. What’s different now is that some more of the product is arriving into the marketplace. Mechanical Dura Ace 9100 has been out for a few months, new Di2 is now arriving and the disc brake, power meter and carbon wheels are still to come… Here’s a team spec Trek Emonda with Dura Ace Di2 as an example – it’s a great looking bike!

It’s an unusual name, but S-Phyre is Shimano’s Dura Ace of soft goods. So these new shoes (with their Boa closures) are Shimano’s top end race shoes, available in both road and mountain bike versions (and several colours). In my experience, Shimano’s shoes are getting better and better, so these will likely be a fine choice. I like the understated branding too. S-Phyre see’s Shimano looking to make a big jump forward in the quality of materials, design and performance of their shoe range. 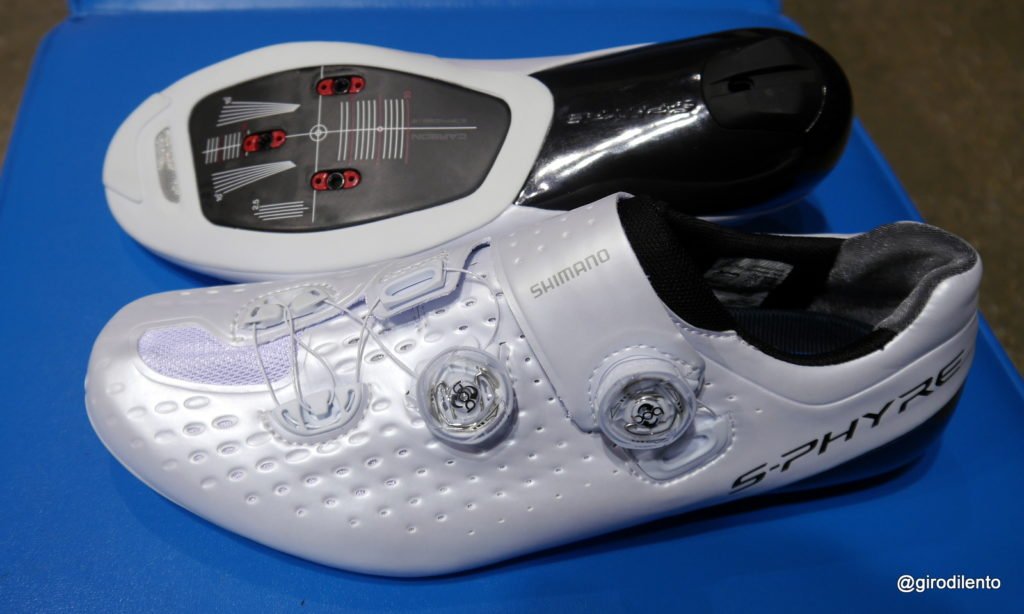 With cycling shoes becoming more obviously a fashion as well as a performance item, it’s good to see a new colour option run on the RP5 Endurance shoes: 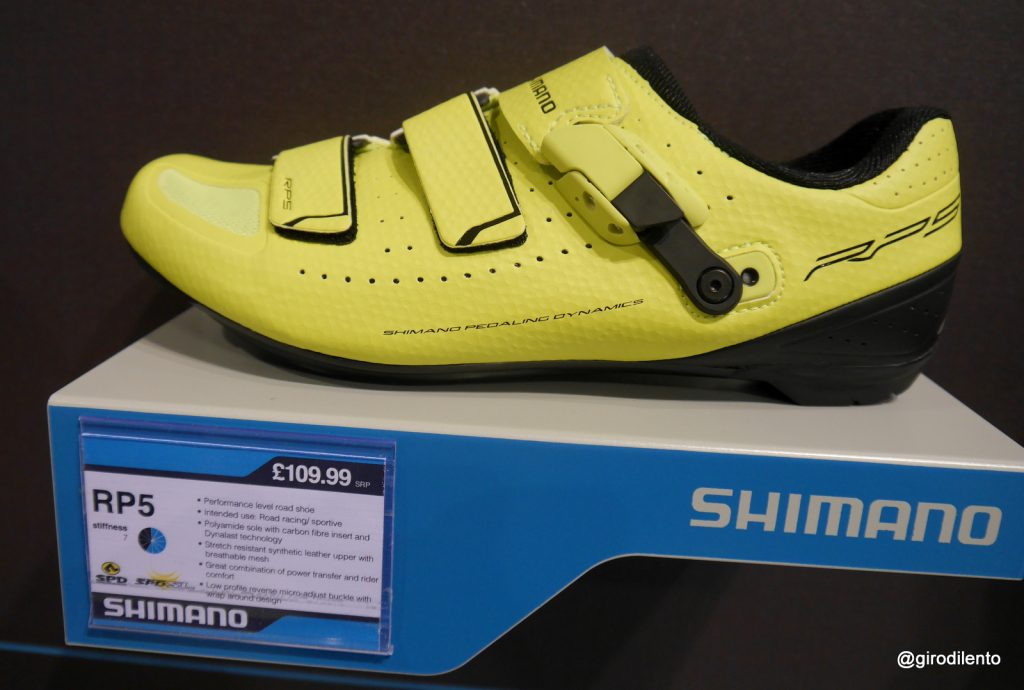 The highlight of the Shimano stand was this striking Specialized S-Works Venge Dura Ace Di2 Disc, featuring most of the cutting edge components of the new R9100 Dura Ace series: 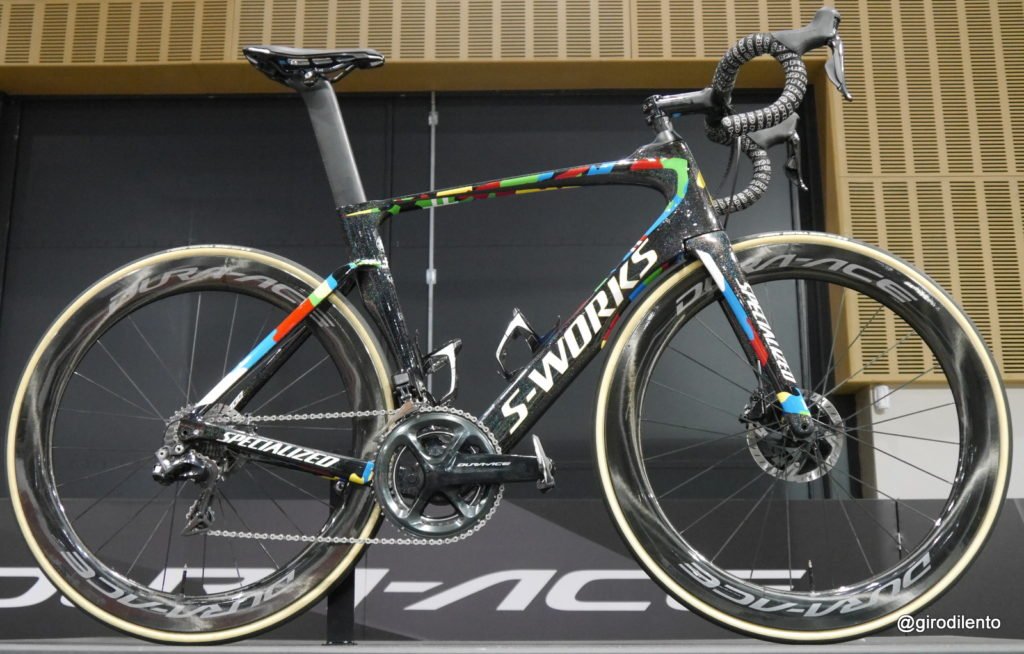 Shimano’s Pro Bike Gear brand has been busy too working on new products to help new Dura Ace seemlessly integrate with more bikes. The new Pro Vibe carbon bars with full Di2 internal routing are a good example of this – available in either aero or more traditional shapes 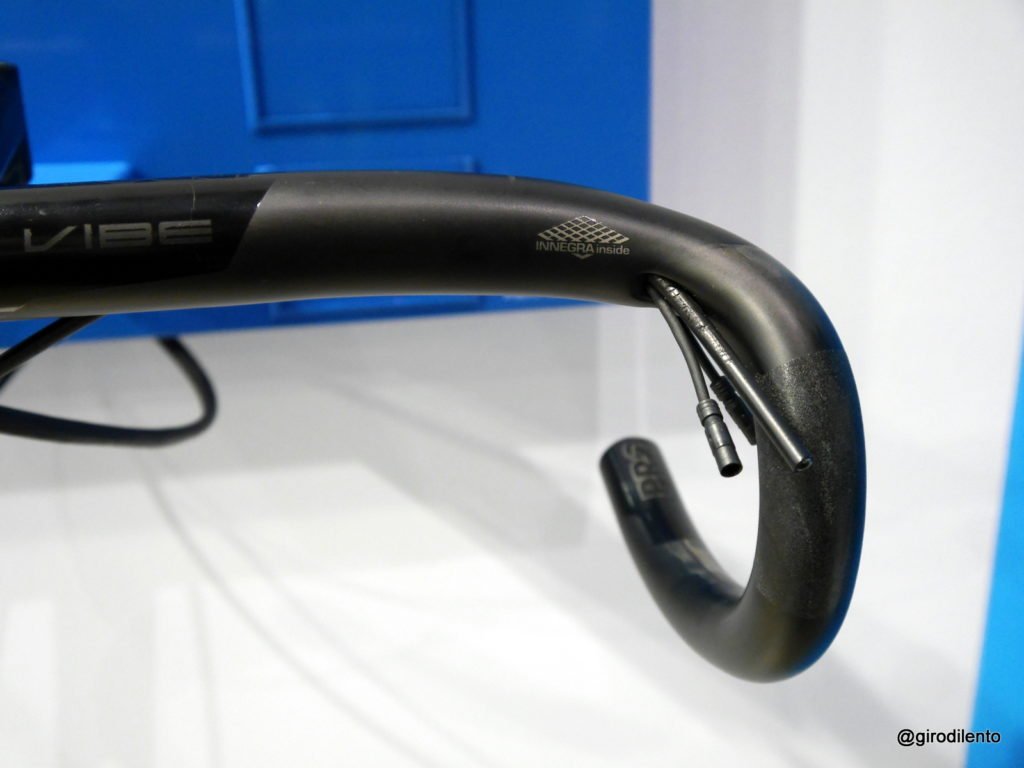 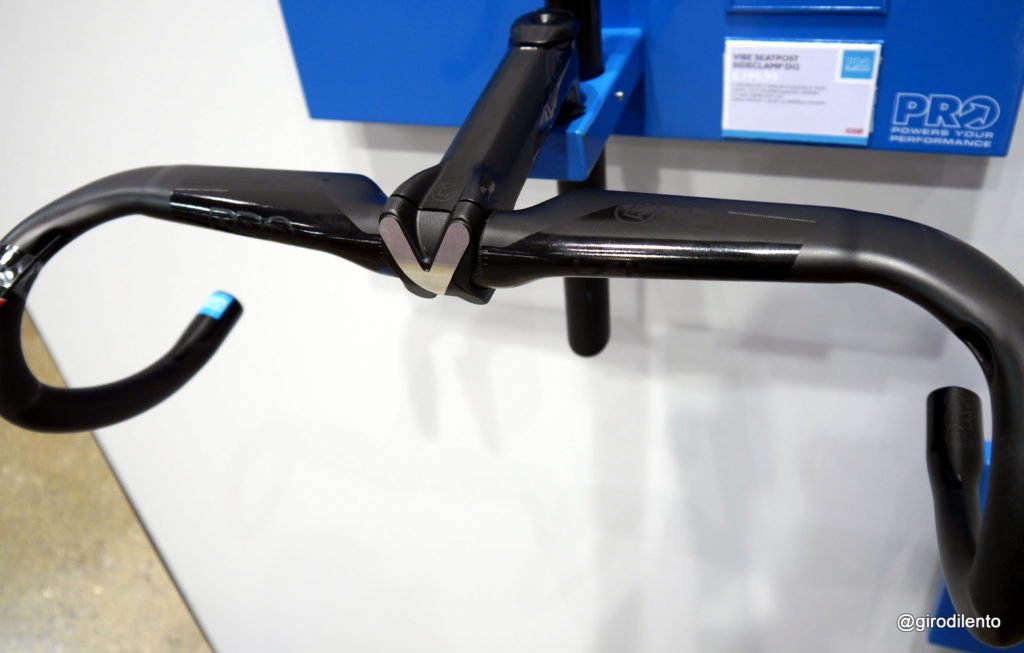 There was also an interesting new Pro Stealth saddle on display. It was originally designed more as a TT style saddle using data from Shimano’s Bikefitting system and in measuring pro riders interface with their saddles. It was evolved with feedback and more data and is a wider saddle, much like the wider tyres move, based on the fact that in the development process riders said they found it much more comfortable. 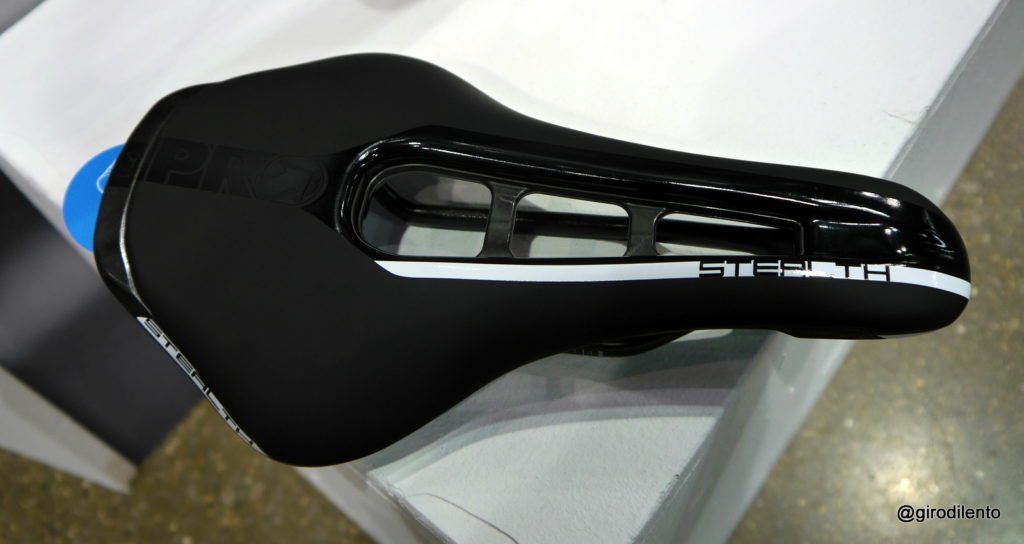 It’s good to see more product design based around quality anatomic data. So these look like interesting saddles to check out further 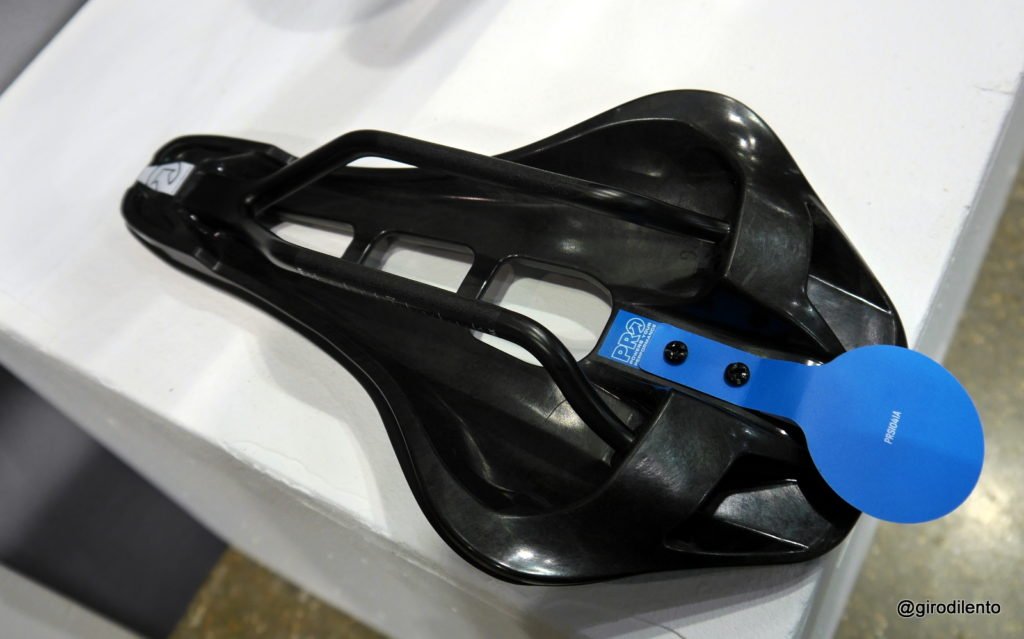 With more and more of us considering switching to tubeless tyres, ideas like this Pro Tubeless tyre inflator make a lot of sense. Use it with your track pump to help seat your tubeless tyres without needing to go to your bike shop. This retails for £49.99 and I think one might end up on my shopping list 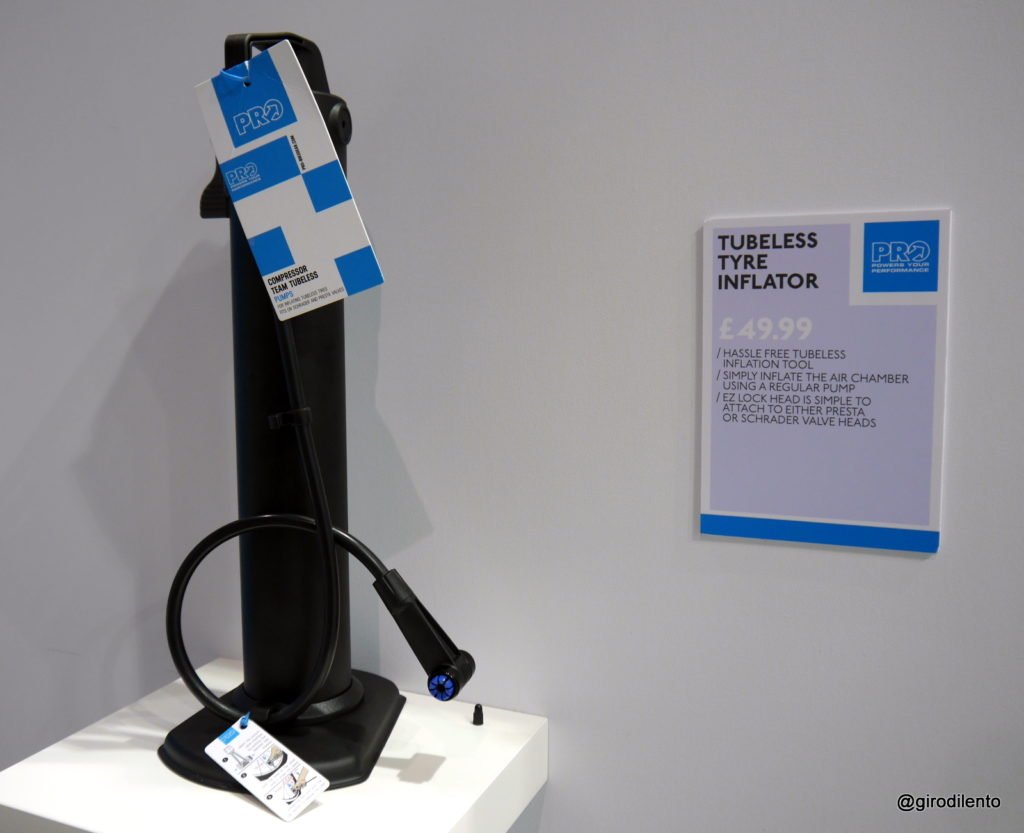 As well as their exising range that was on display including the excellent Datum, Zero Disc and Vapour Carbon CX, Genesis had a bunch of interesting bikes to see including two prototype new models. 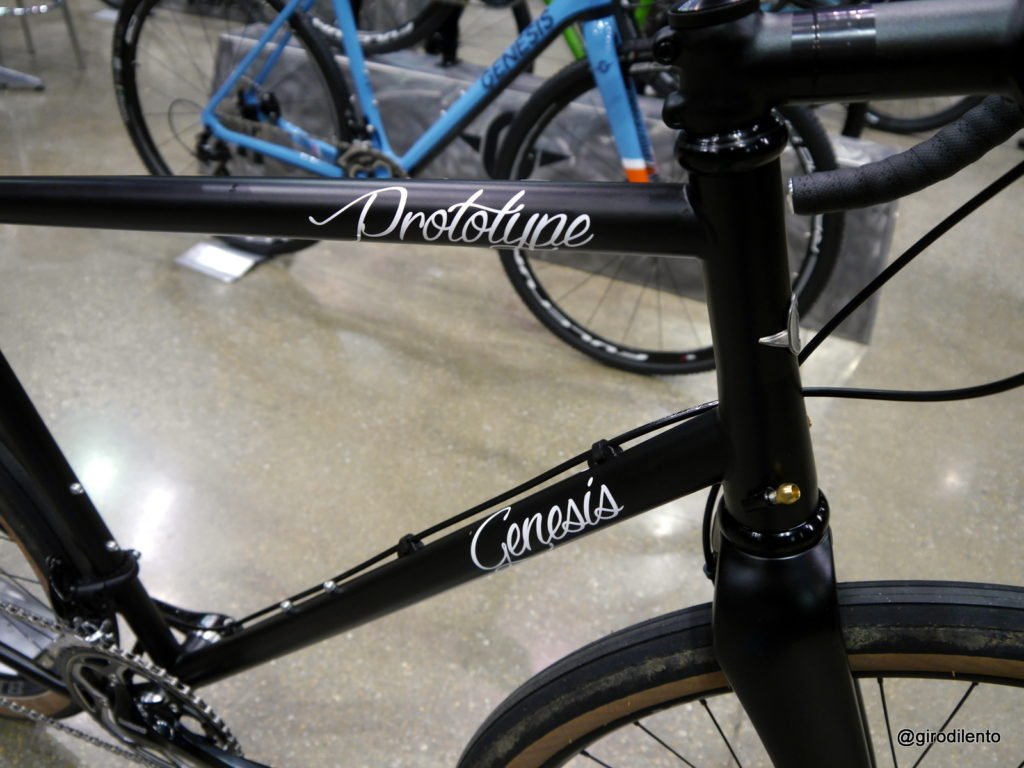 The big news for road riders was the new, unnamed and unfinished Road Plus prototype a Steel framed bike designed for mostly road riding plus some exploring with space for 650B wheels. 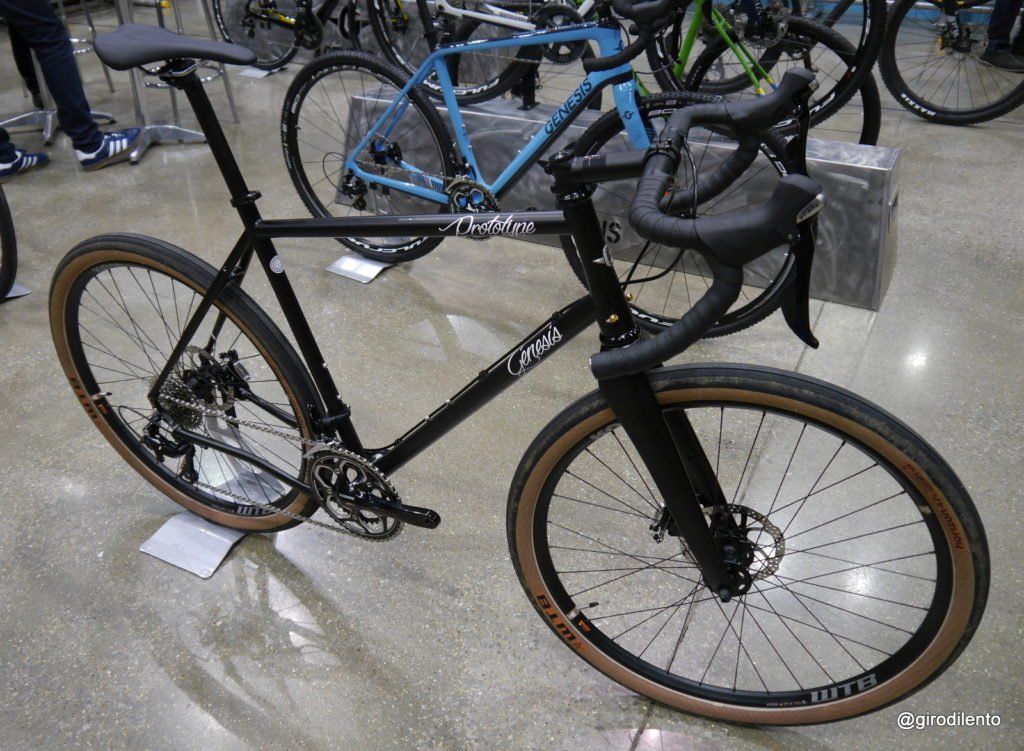 The prototype (non-rideable) had 47mm wide tyres on 650B wheels! Production spec is yet to be confirmed but expect it to ship with 50mm wide tyres. Genesis stressed that this prototype will change significantly before production but features like the dropped chainstay (to help fit wider tyres) will remain as it helps keep the chainstays shorter and the handling more like a road bike. Genesis said the bike will hopefully launch late summer for the 2018 model year and will be designed for riders who mostly ride on the road but might occassionally want to go off-road. It’s not a replacement for a Croix de Fer or a Datum but another choice for riders looking for a steel framed road bike capable of doing a bit more. I’m looking forward to seeing the finished product! 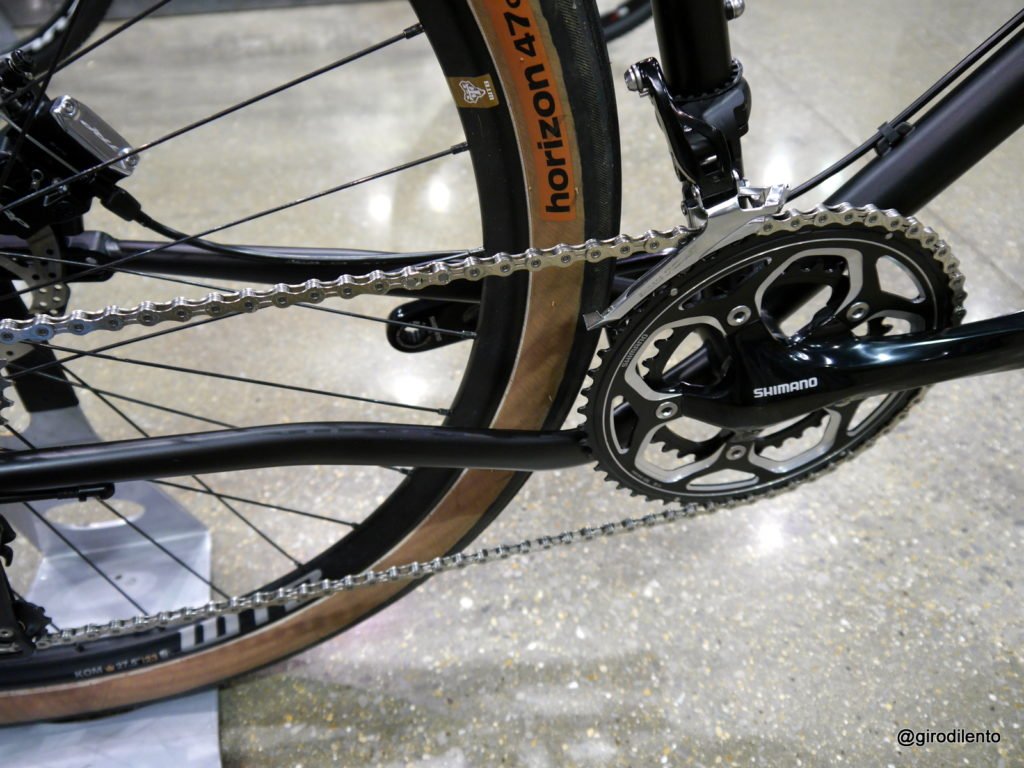 Genesis also had a Prototype Hardtail 29er carbon race bike on display, which they told me was designed for speed and fun. Again this model is hoped to ready for the 2018 model year launch in late summer 2017. 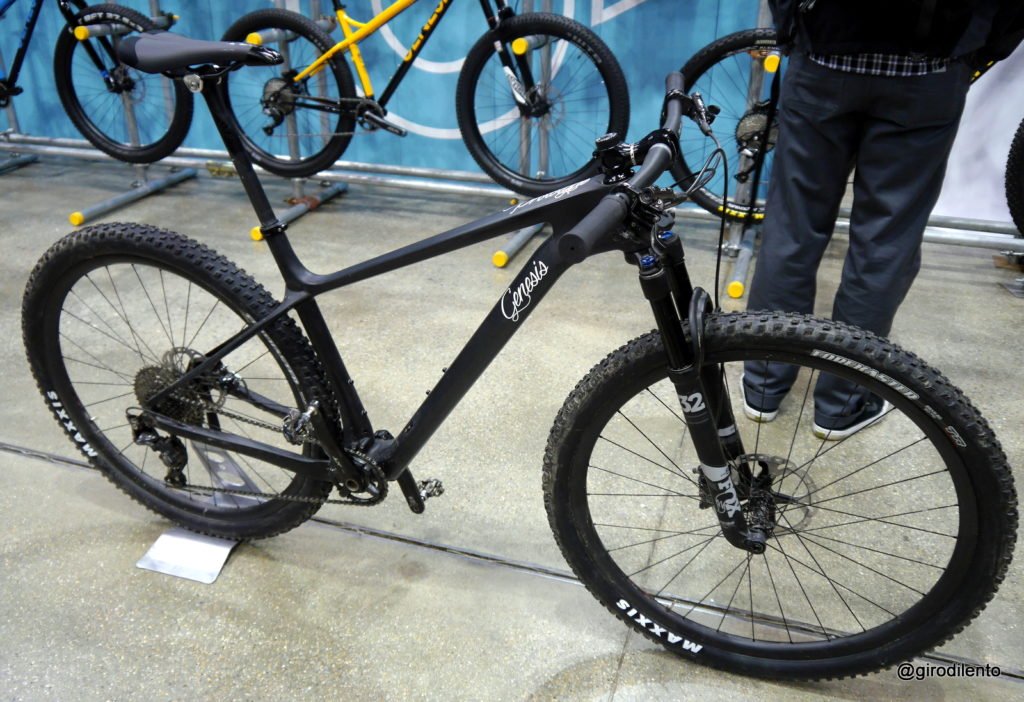 Also on the Genesis stand was this lovely Volare Team Dura Ace R9100 Build, which also includes some of the new Pro finishing kit and frankly looked terrific 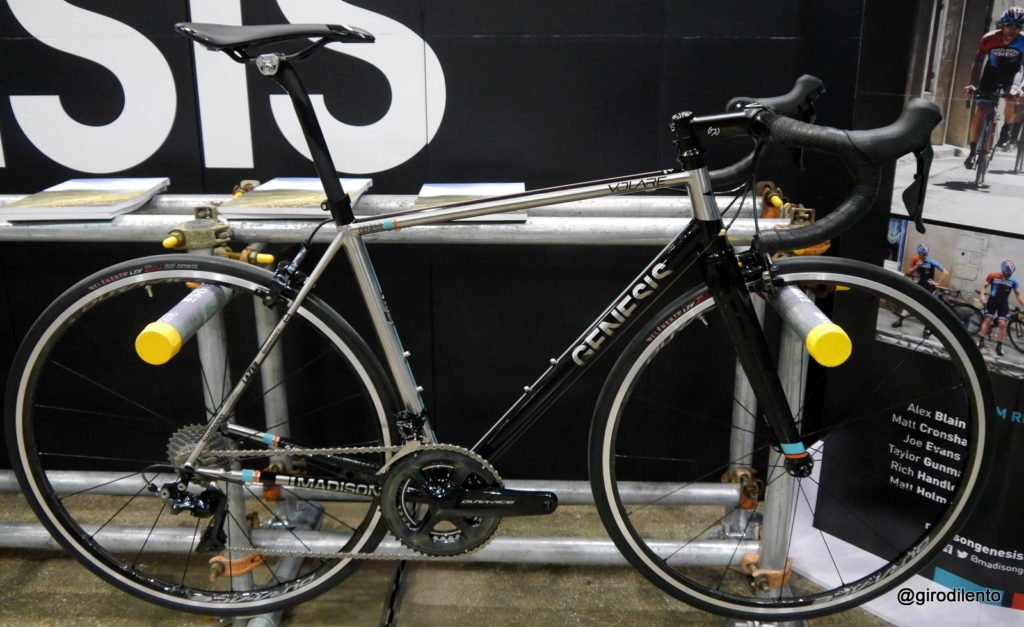 If you’d hadn’t seen this before, Genesis is in the process of rolling out a Genesis Bike Club for owners and included is a range of clothing now available to order through your dealer. You can follow the club on Instagram and the clothing all derives from Madison’s top of the range own clothing line. 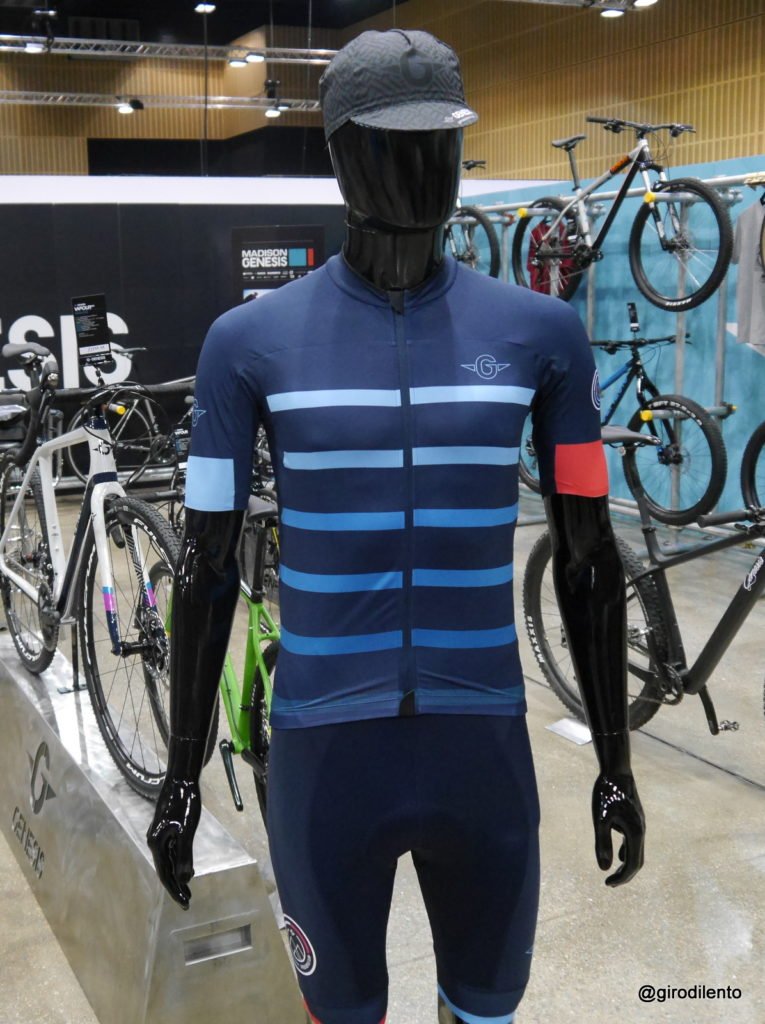 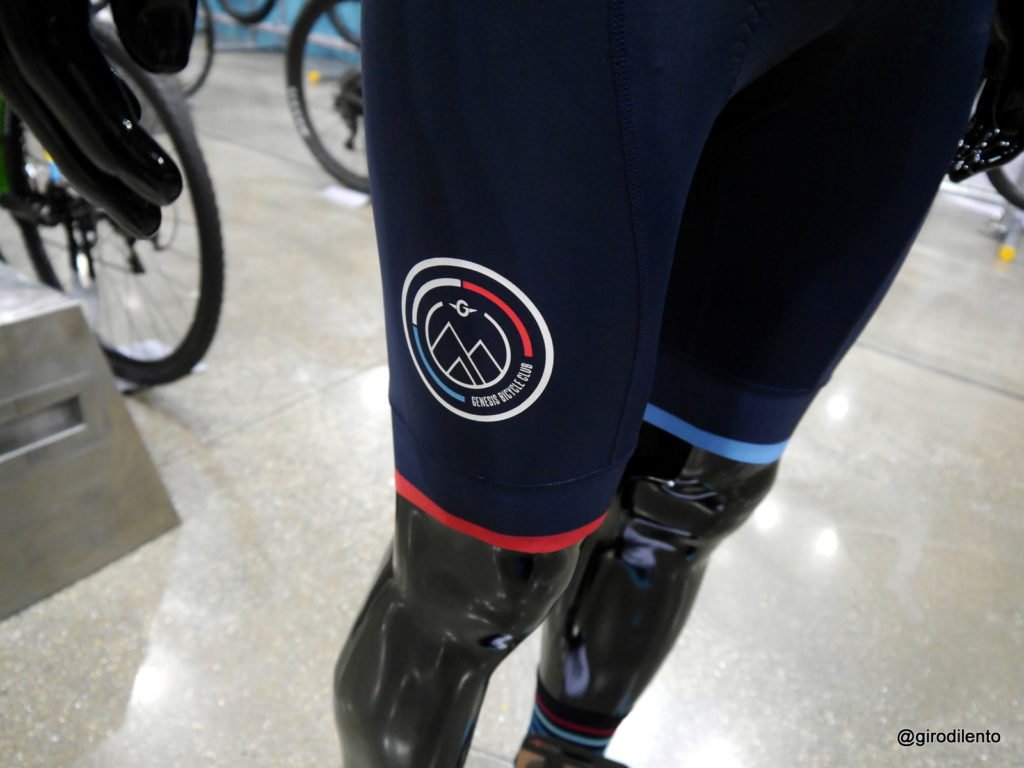 I think it looks good!

DT Swiss are getting really serious about aero wheels as they see gains and opportunities in the aero market. The top end of the Aero market is dominated (in my opinion) by Zipp, Reynolds and Enve, so there’s definitely room for more and DT Swiss are one of the few brands that can make all of their wheels including spokes, hubs and rims (Shimano do that too).

The Swiss company also had a cool own brand bike on display with a tasty Dura Ace build (including a very high saddle height): 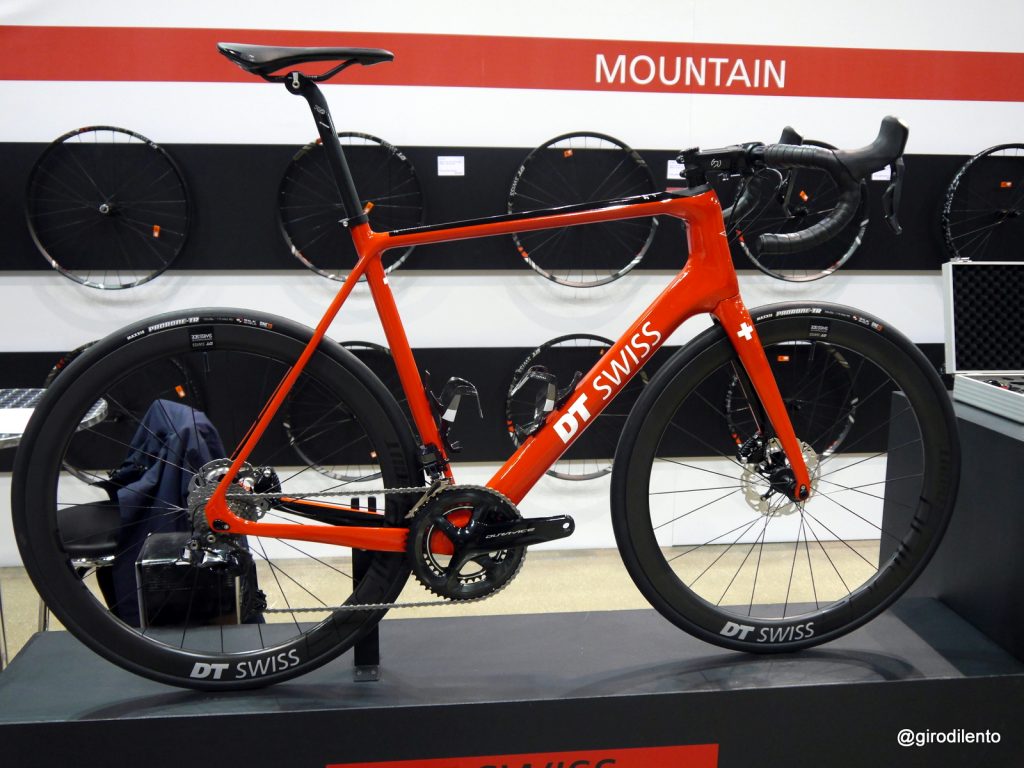 As well as being on the bike, the terrific looking ERC 1100 DiCut Disc specific aero wheels were also displayed in pride of place on their stand 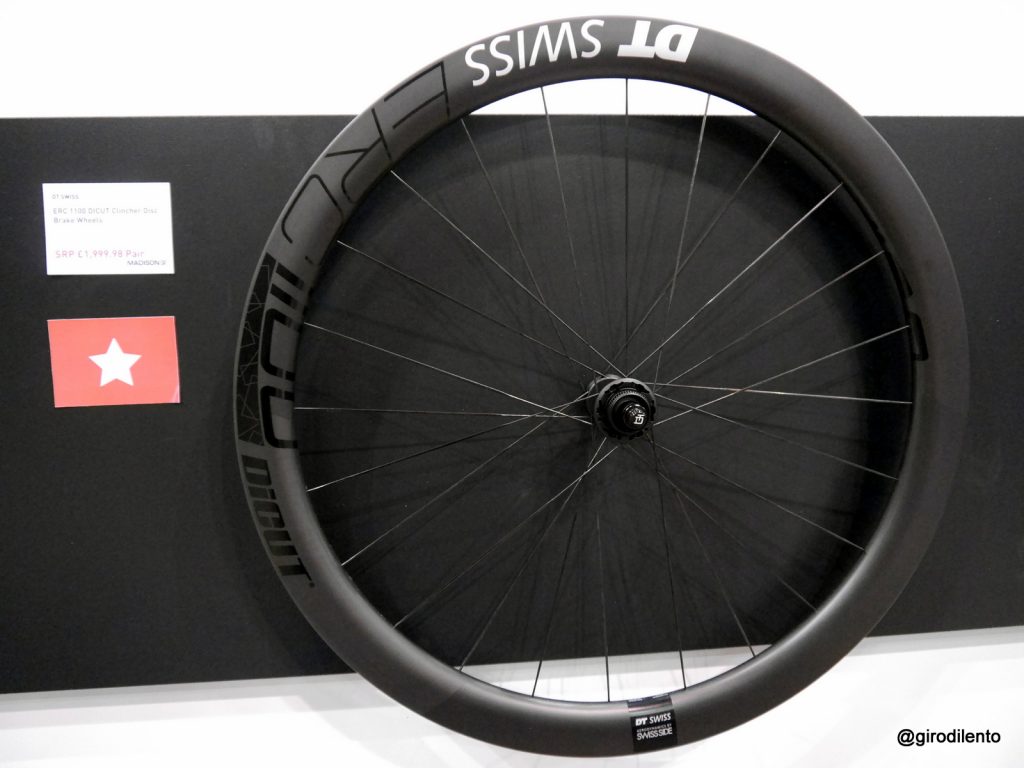 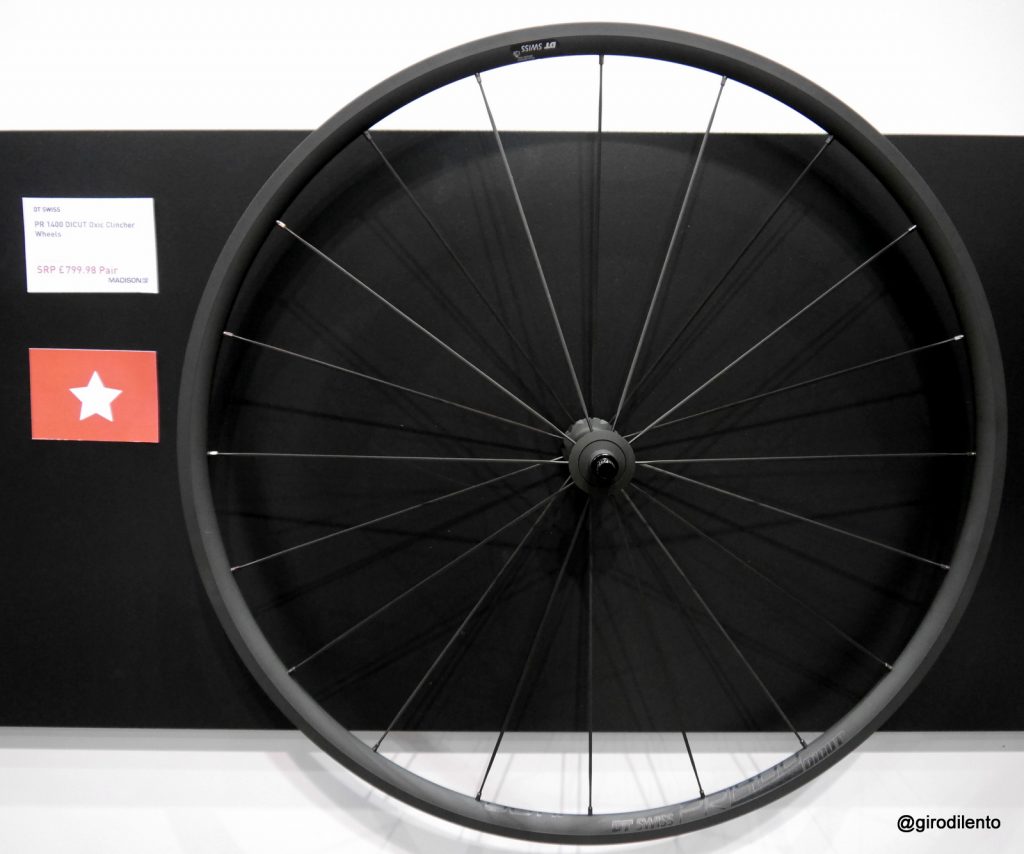 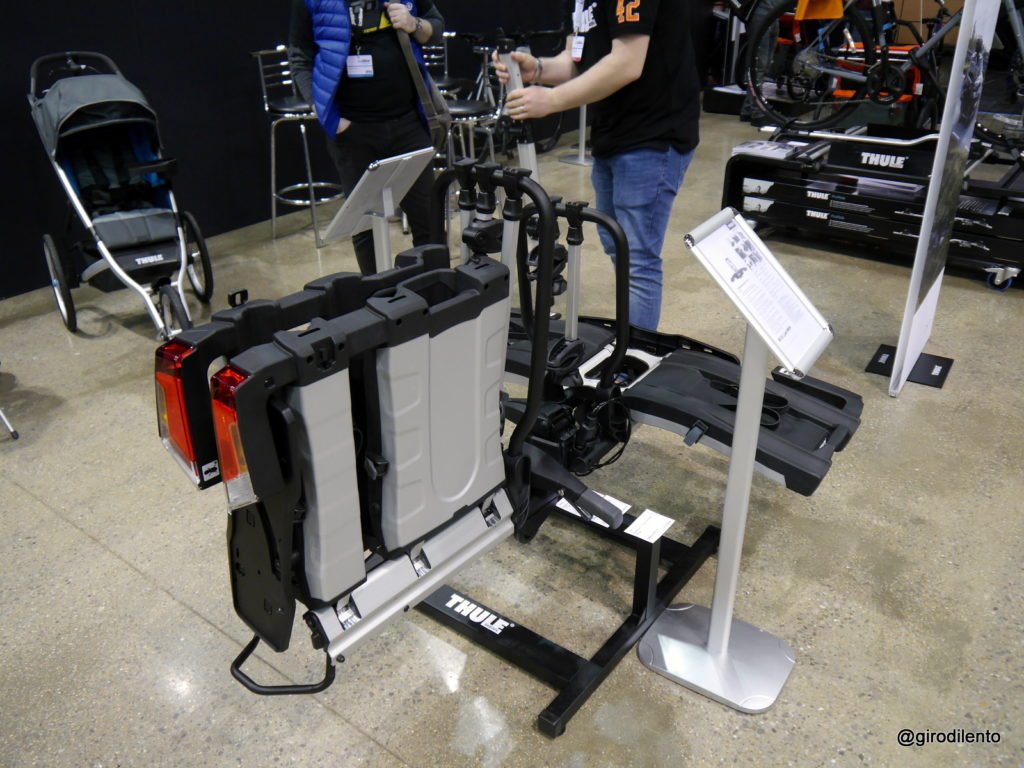 Clever Swedish company Thule had new towbar mounted bike racks that fold up for easy storage. A number of my friends have switched to these terrific towbar mounted bike carriers in the last few years and I’m considering joining them (though they’re not a cheap option!). Also driving this trend is more and more people buying ebikes, which are typically heavy, so these racks (for which you can get a ramp) allow for a much easier way to transport them.

The part that I like is how little space they take up when folded. The Thule guys told me a lot of people just fold them up and put them in their boot but they won’t take up much space in your shed or garage (or even a cupboard). Clever!

This Shimano owned brand has recently dropped it’s running clothing to concentrate on cycling. As part of a push to move the brand forwards, Pearl Izumi were showing their new Pi Dry fabric, which is an exclusive to the company of a water resistance treatment that is much, much longer lasting than DWR coatings. Pearl Izumi have a 3 year exclusive for this technology and it was obviously creating a good deal of interest as I went to the stand 4 or 5 times but never found anyone free to discuss it with me. 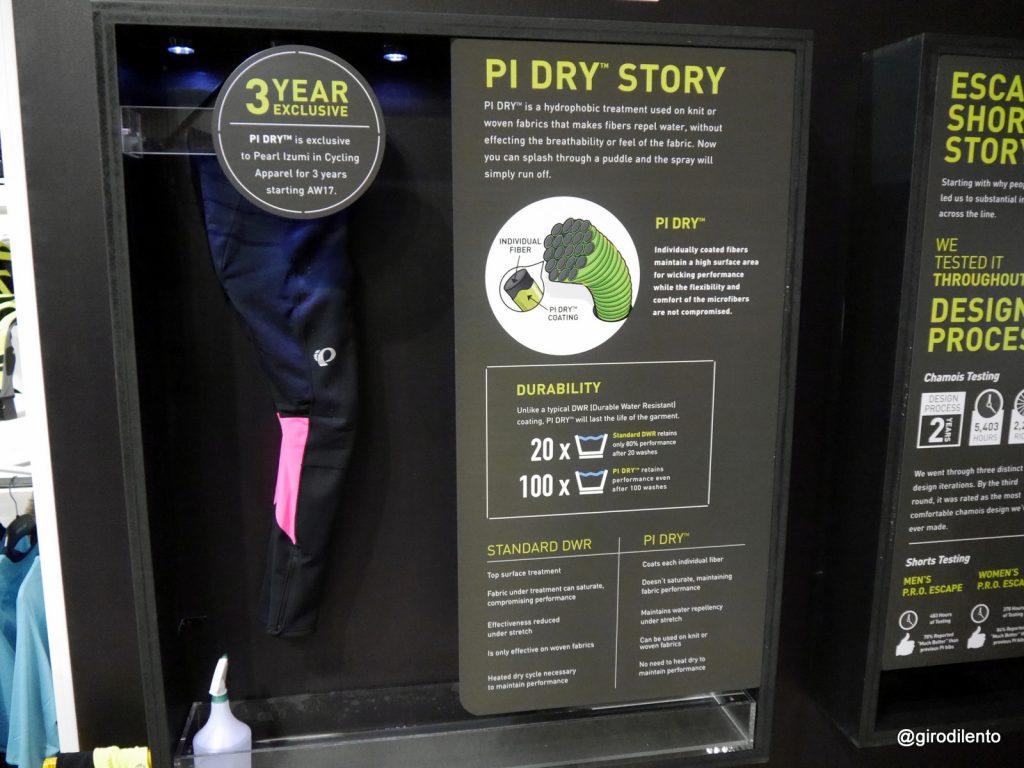 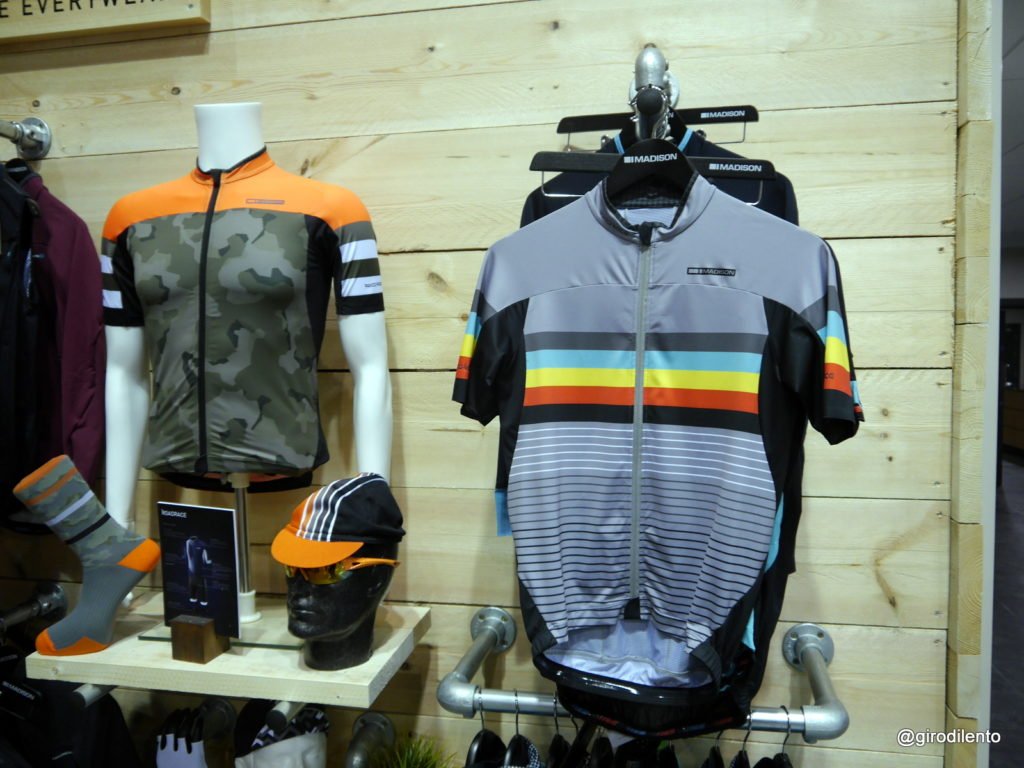 Madison have been continually improving their clothing line, which has had more and more good reviews that I’ve seen and they had their new range for this season on display and were talking it up as their best yet.

Silver Label Action Cameras – a Go Pro for much less… Madison used to distribute GoPro, who’ve now gone to direct distribution and they’ve switched in a much cheaper option – Silver Label. I think it’s a smart move as long as the performance is still decent as GoPro’s aren’t cheap and most of us are far from professional cinematographers. I’d certainly try a cheaper option as in my experience you really need more than one camera to make an even slightly interesting video. 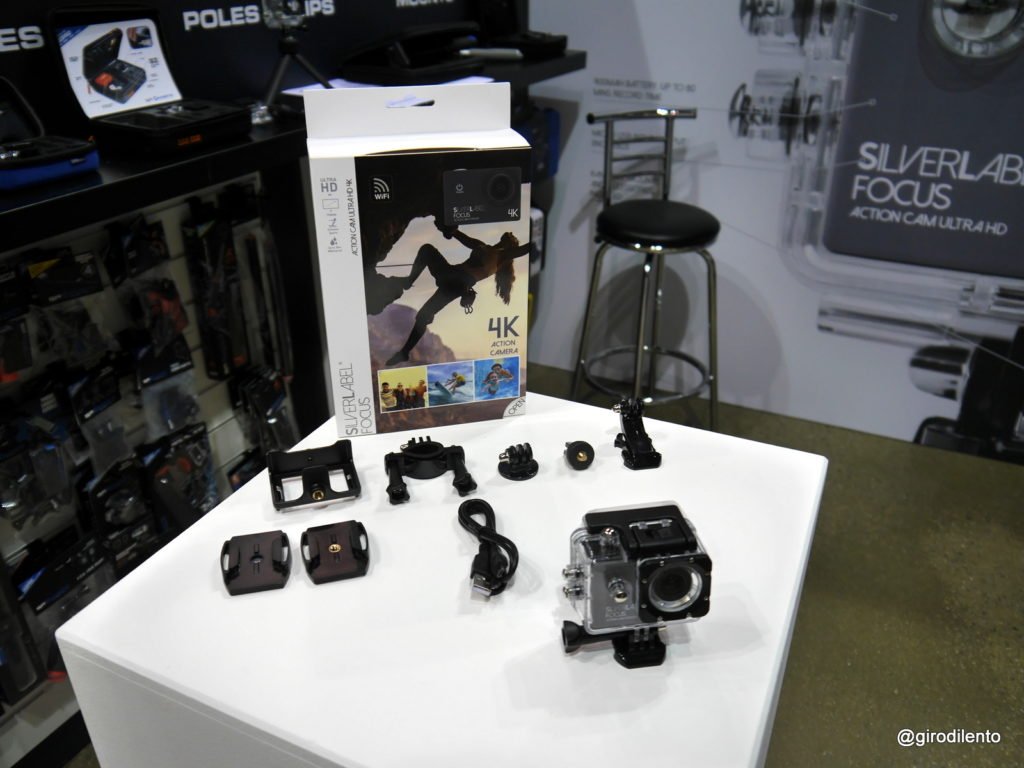 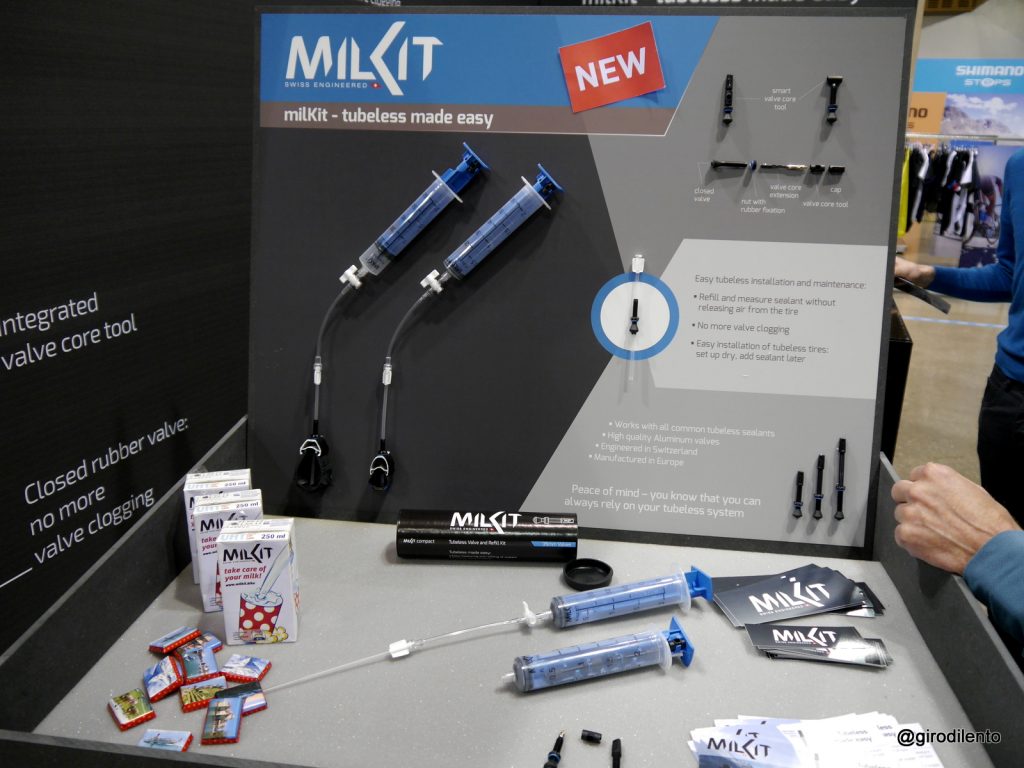 Thanks to a relationship with DT Swiss who also work with Madison, small Swiss brand Milk-It now have their clever tubeless kits on distribution via Madison which should see better availability in the UK. You could only previously buy them via Amazon. The Milk-It kits make it much easier to get tubeless sealant (in the right quantities) in and out of your tubeless wheels, so it’s great to see them moving to wider distribution. 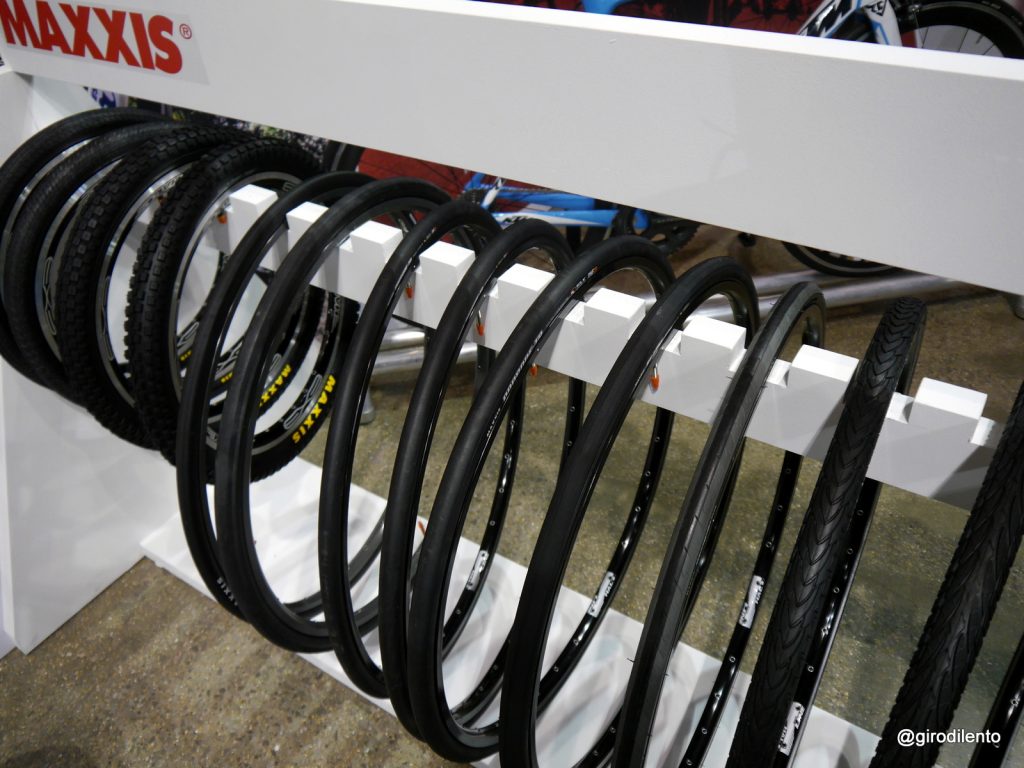 Maxxis tyres are a new brand to the Madison stable. They’re very well known in the mountain bike community but the Padrone TR Tubeless looked like an interesting new (to me) tubeless choice, with a high thread carcass and a range of widths. 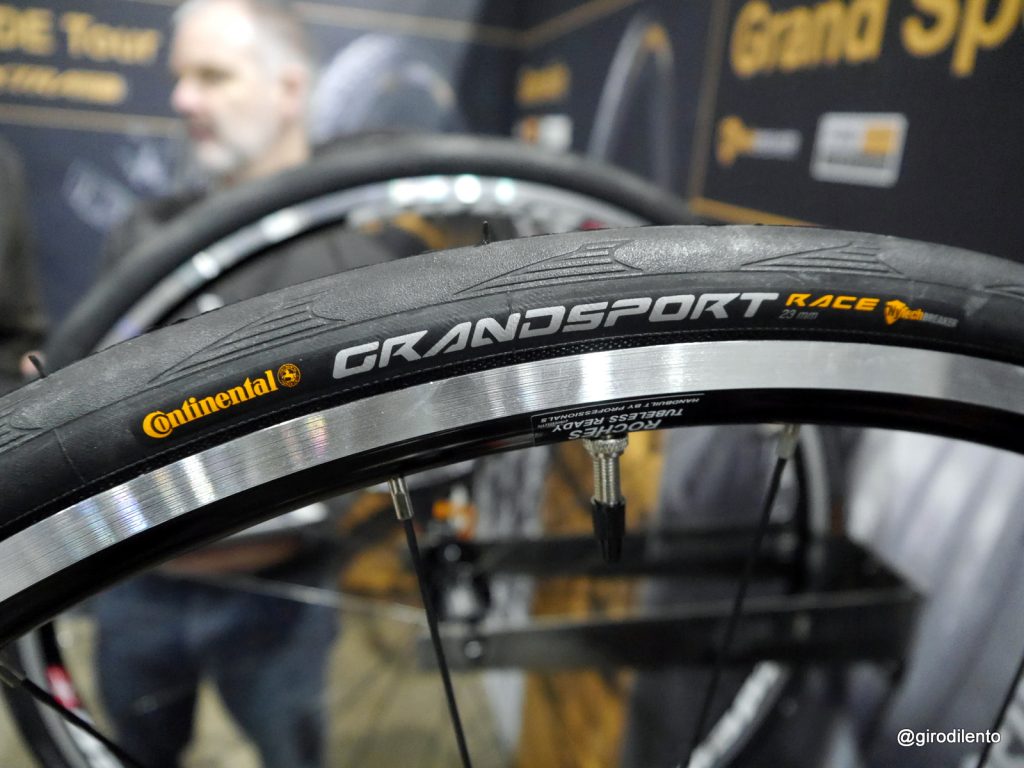 Speaking of tyres, During a good chat with one of the guys from Continental he recommended the GrandSport Race as a cheaper alternative to the brand’s GP 4 Seasons winter tyre. The GrandSport Race features a different “Pure Grip” compound to the famous and more expensive “Black Chilli” and performs really well in cold weather and still delivers excellent grip. It’s always nice to hear about good tyres that don’t cost a fortune and since the show, I’ve spoken to a couple of people who swear by the GrandSport Race as long lasting, puncture resistant winter tyres. Well worth checking out it would seem!

The new Ridley Helium X was a star of the Belgian brand’s stand. It’s a  lower modulus version of the top of the range Ridley with a lower price to match. 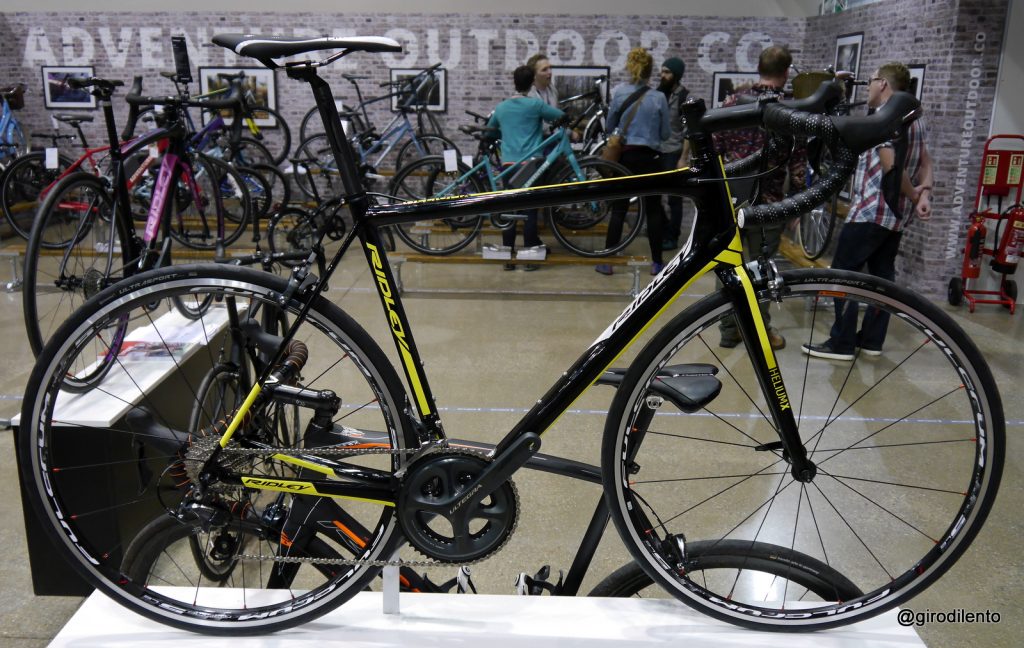 Personally I liked the look of the Fenix SL Disc better and much of the Ridley range features long and low race bike geometry, which may or may not suit you…. 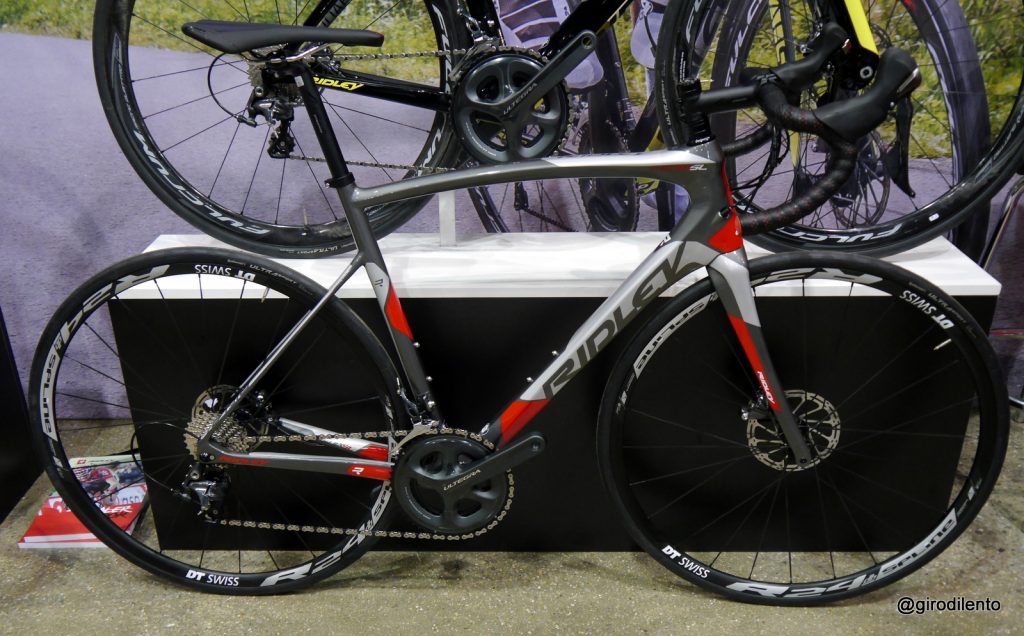 Before I left for home, I couldn’t help but head outside to try out a Shimano Steps e-bike. I know the Steps programme is a major focus for the Japanese giant and I’d never tried one. I have a Trek city bike and so when I spotted a Steps Di2 equipped bike, I made a beeline for it. 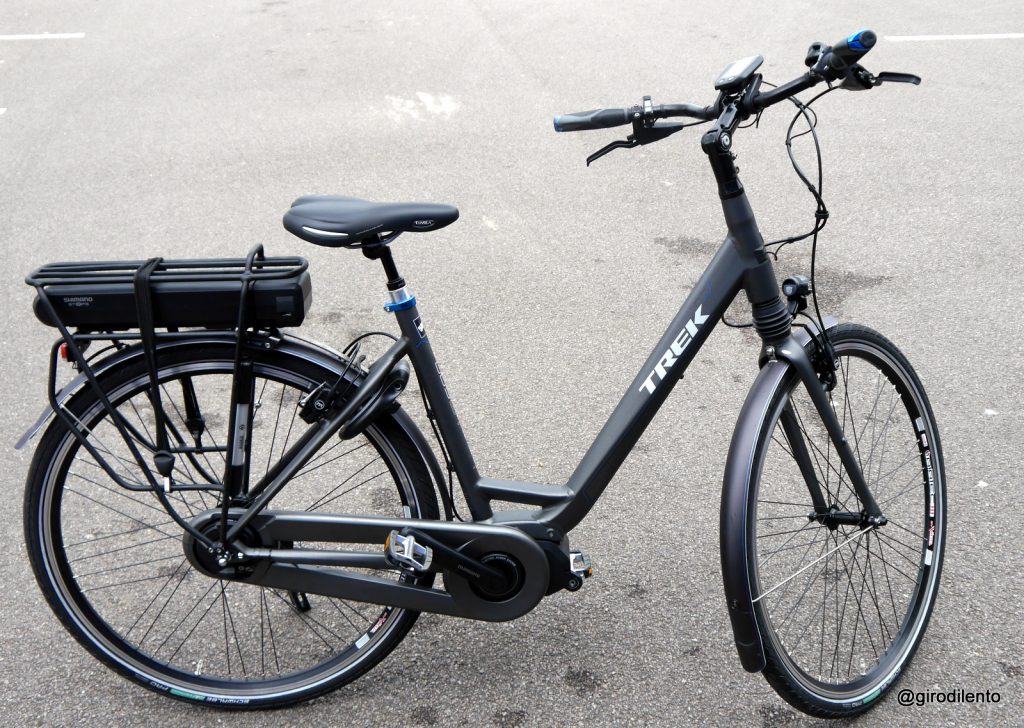 On a quick ride round the car park I thought it was very impressive. My own City bike weighs around 17kgs and it feels pretty heavy until you get it up to speed when the momentum helps it roll along fairly effortlessly …. until you reach a hill when it all gets quite hard work!

Funnily enough a 250W motor and automatically gearbox (the Di2 bit) made riding a 25kg bike almost effortless. I’d love to try riding one around town where I live as I think it’d be a complete joy.

For sure, it was great to have a go.

Thanks for reading and thanks to Madison for the invitation to the show.