In 2018 the smart trainer that launched a revolution remains a fine choice even in a much more competitive landscape. The Wahoo Kickr is a smooth, powerful, stable, well designed trainer that’s a fine indoor training companion. 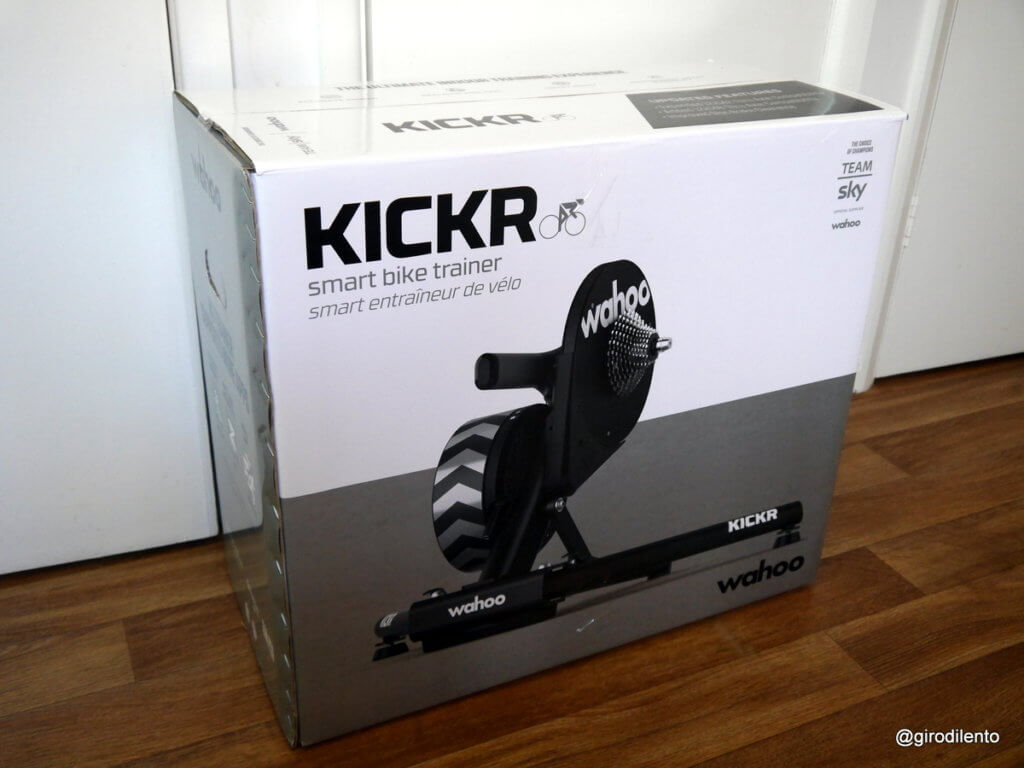 The latest generation of the Wahoo Kickr is in fact the 3rd evolution of the trainer that launched the Zwift and Erg revolution. Whilst there has been a number of changes over the years, the fundamental design of the Kickr remains unchanged. That’s no bad thing when the riding experience is as good as it is. Some things may have changed and on paper it’s possible to argue that it might have fallen a little behind, but connect it to your favourite platform, whether it’s Zwift, Trainerroad, The Sufferfest or Road Grand Tours and it delivers a terrific riding experience and that alone is enough to make it an easy recommendation.

However, there’s more, plenty more. Most of the changes over the years have been evolutionary. For example, the ability to easily swap hub widths and axle configurations has been improved each generation (now up to 12×148 through axle) as well as increased clearance for disc brake bikes, making the Kickr versatile & easy to live with. In my house, I’ve regularly needed to swap between two bikes with different hub spacing and it’s been simply a matter of turning around the end cap on the non-drive side of the Kickr, which, helpfully, has 130mm and 135mm engraved on the relevant side. It’s a good example of the attention to detail that Wahoo have put into the design. 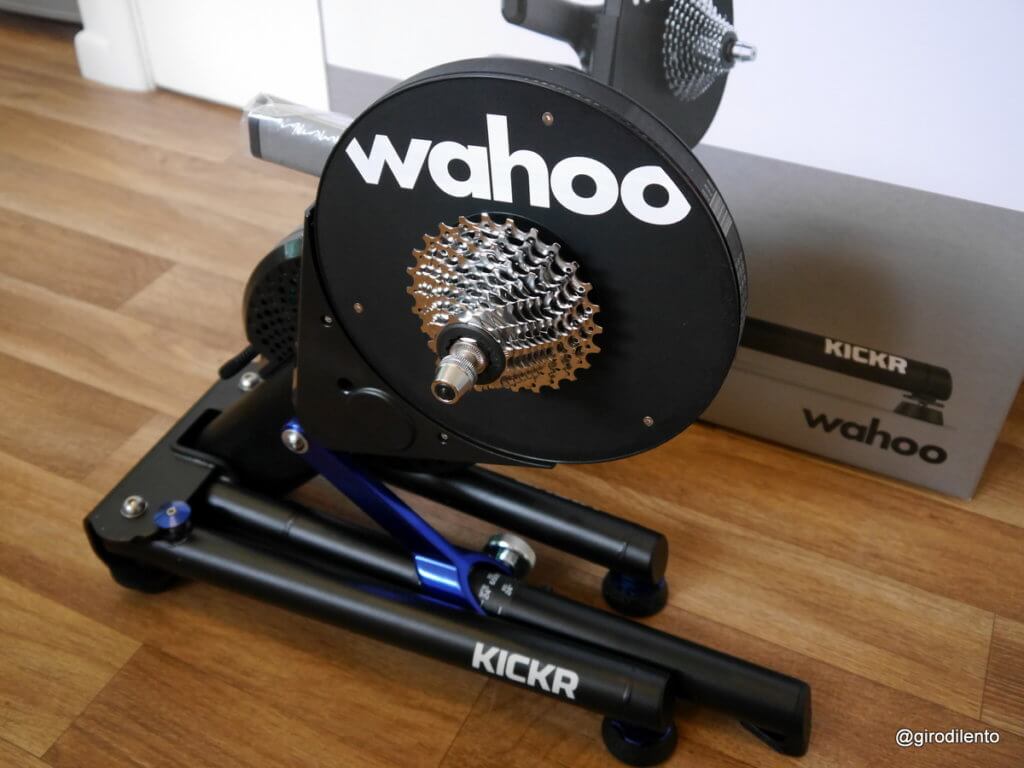 Another evolutionary feature is the carry handle that appeared on the second generation. Smart trainers are heavy and not the easiest to move, so a handle is a great idea and this one does the job very well. The Kickr is easier lug about than my Tacx Neo as a result. I’m fortunate in that I have a dedicated space in my garage, so I don’t need to pack up my trainer after each ride but if you do, the ability to more easily carry the unit is a useful plus. For this v3 version for 2018 there are also changes to allow the Kickr to pair with the Kickr Climb, which means that once your bike is attached you can tilt it easily. Another small but positive aspect of life with a Kickr is that you don’t need a front wheel riser as you do with many other products and I like that too – it makes living with it just a little easier.

Like all high end smart trainers, the Wahoo Kickr offers excellent connectivity. In fact arguably the Kickr is the device with the best connectivity on the market and given it’s iconic status in the market, any new app or training platform will be configured to work well with the Wahoo during it’s development. Bluetooth and Ant+ are a tick as you’d expect. I’ve mainly used the Kickr using Ant+ FE-C connectivity to a PC and the Sufferfest app. I’ve also ridden on Zwift and Road Grand Tours (my Traineroad subscription’s expired). You’ll be able to easily connect your Kickr to your iPhone, Android phone, iPad or tablet and PC or Mac. 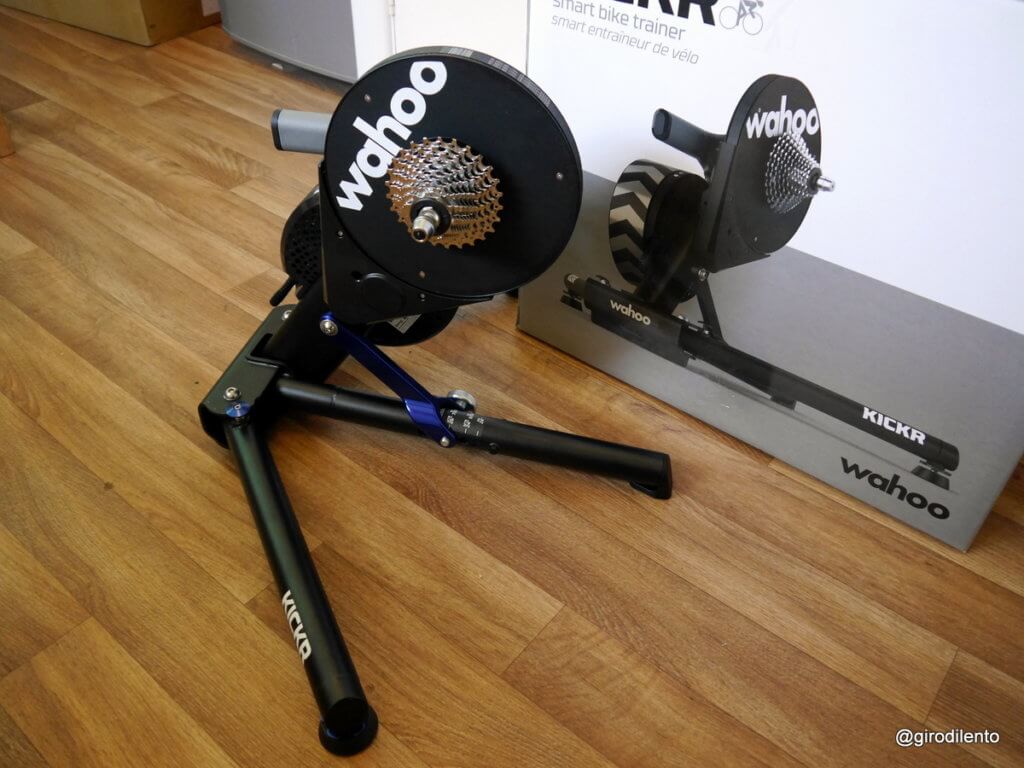 A key feature of high end smart trainers is their resistance motor. Whilst more “budget” models top out at around 1500W and around 15% gradient simulation, the Kickr steps that up to 2000W and 20% inclines and is in line with other high end choices, which offer at least that level of resistance. I found the motor performance and smoothness to be one of the nicest things about training with a Kickr (after the ease of connectivity). You can use the free Wahoo app to choose which modes your Kickr runs in and I found that in Erg Smoothing mode, the way the power changes is really nice to ride with, also working very well with the belt and fly wheel construction.

To use the Kickr you do need to have it plugged into the mains but the power block and cable offer a decent length and most people should be able to get to a nearby plug without the need for an extension lead. 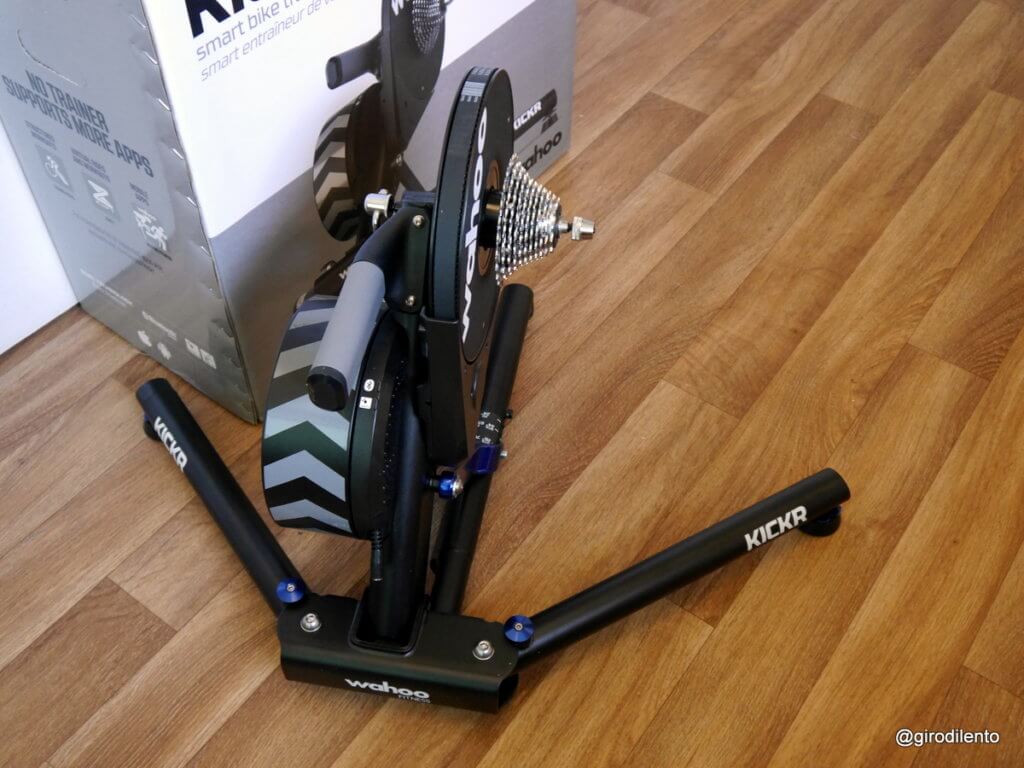 The Wahoo Kickr has been a highly successful product and after several months riding on one, it’s easy to see why. It’s a well thought through design that rides really well and is easy to connect to whatever devices you wish to use via whichever type of communications protocol you wish. It’s easy to move , powerful and adaptable to different bikes, all of which makes for a great training companion.

I was initially surprised when I first share a photo of the review unit on my Instagram feed that I had a number of comments from owners of Kickrs welcoming me to the “club”. The Kickr is a product that people enjoy owning and now I get why.

So what are the downsides?

No product is perfect and there are always cons to balance with pros. Being a belt driven trainer means that the Kickr is noisier than a Tacx Neo but probably not demonstrably noisier than any other belt drive trainer. The interaction of the belt and the flywheel will create some mechanical noise but Wahoo have done a good job of minimising this. It does have a bit of a whine but it’s not noisy and I didn’t find the noise annoying in any way.

Unlike many of its more recent competitors, the Kickr doesn’t have the ability to measure your cadence. Wahoo supply a cadence sensor in the box, which you can attach to your cranks (or your shoe) to get around this. I found this annoying as I’ve used 3 different bikes on the Kickr and it adds a touch more hassle to changing your bike. If you’ve been using other smart trainers that measure cadence automatically this seems a bit like needless hassle.

You also need to calibrate of the resistance unit on the Kickr via a spin down test. You do this through the Wahoo app and all it involves pedaling up to around 40 km/hr, then stopping and the software checks and adjusts the braking of the motor to ensure power accuracy. Whilst this isn’t unheard of, or a massive hassle, there are other choices that don’t need this.

A final aspect of the Kickr that on paper was a let down is that since version two, the Kickr no longer has a power metre built in. Wahoo removed the strain gauges they’d been using and power is calculated by the software based around the resistance of the motor. I haven’t had the ability to measure the accuracy but plenty of other reviews have and in fairness, they’ve typically said that even with this change the Kickr delivers good power accuracy.

So whilst on paper this is a negative, in use, I’ve not had any issues in how the trainer has worked or how it’s calculated or displayed power. If you’re looking for ways to justify the spend, you can’t convince yourself that you’re buying a power meter as well with Kickr as you can for some other models. Whether that matters is up to you. This particular part of the specification did bother me for a while during the review period but I’ve enjoyed riding the Kickr enough that this “concern” has just ebbed away with more riding time. The Kickr is calculating my power, it’s doing it consistently and it gives a great riding experience, which has more than won me over.

Overall I’ve found the Wahoo Kickr a pleasure to train with. I’ve spent a lot of quality time on it over the last few months and I’ve thoroughly enjoyed using it (even with the Sufferfest!)

If you’re in the market for a higher end trainer and can afford the price tag, the Wahoo Kickr is easy to recommend. It’s a well proven design that’s now evolved into a slick, dependable product with excellent connectivity and an easy to live with and use design. Whilst the fundamental design has been around for a number of years and on paper it might no longer quite match some of the cutting edge specs of some competitors, it’s a great product to ride and live with.