UPDATE NOVEMBER 2017: I now have a Wattbike Atom in for review and have posted first ride impressions here: https://girodilento.com/wattbike-atom-first-ride-review/

This week Wattbike have launched a new consumer focused Smart Indoor training bike – the Wattbike Atom. This is a very welcome new model that sees Wattbike jump right back into contention in the new world of Zwift, Trainerroad, variable resistance, simulated climbs and Erg modes. 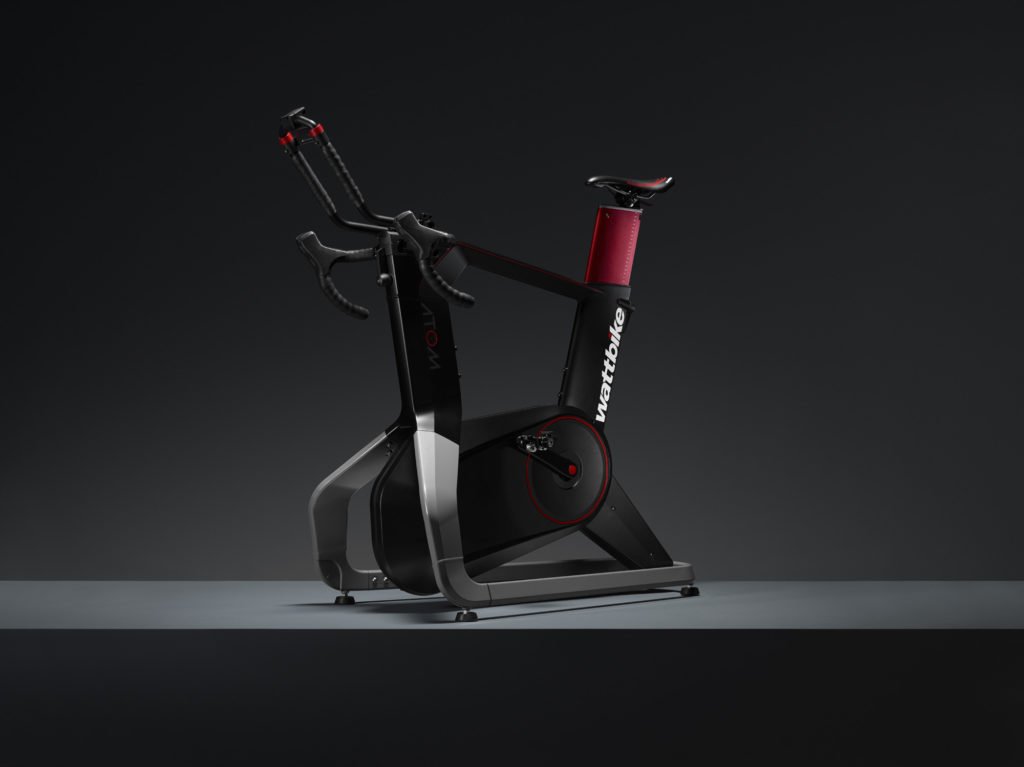 The original Wattbike trainer has been hugely successful and very influential for quite a few years. They’re still heavily relied on by gyms, sports teams & athletes up to professional & Olympic level. They’re a well proven, rugged, accurate and reliable design. I personally spent 2 years and over 5,000 km on one. It absolutely changed the way I think about training and converted me to indoor training as a key part of my fitness (you can get a good feel for how I got on with the original Wattbike here). 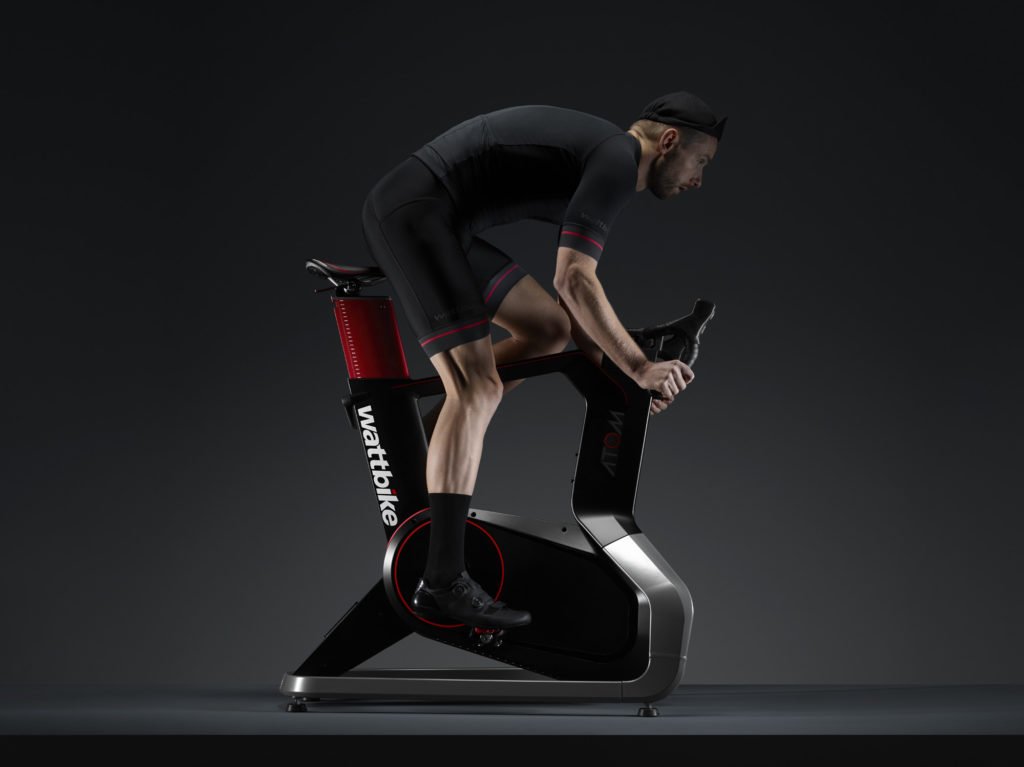 During my time with the Wattbike I saw the landscape shifting. The Wahoo Kickr had launched, as had Trainerroad and Zwift. Indoor training was changing forever for most of us. A few months after the Wattbike left me I managed to get a Tacx Neo to review and I knew that I’d had my head turned. In fact so much so that after I returned the Neo, I bought one. I’d also embraced Zwift (more about that soon). It was now abundantly clear that the ballgame had changed.

The Wattbike Atom is Wattbike’s leap back into the running in the Smart trainer space but bringing with them some of the core of the original Wattbike – such as it’s still a standalone exercise bike. The new Atom is as accurate as the original also boasts the polar view pedalling analysis and measures pedalling data at 100 times a second. 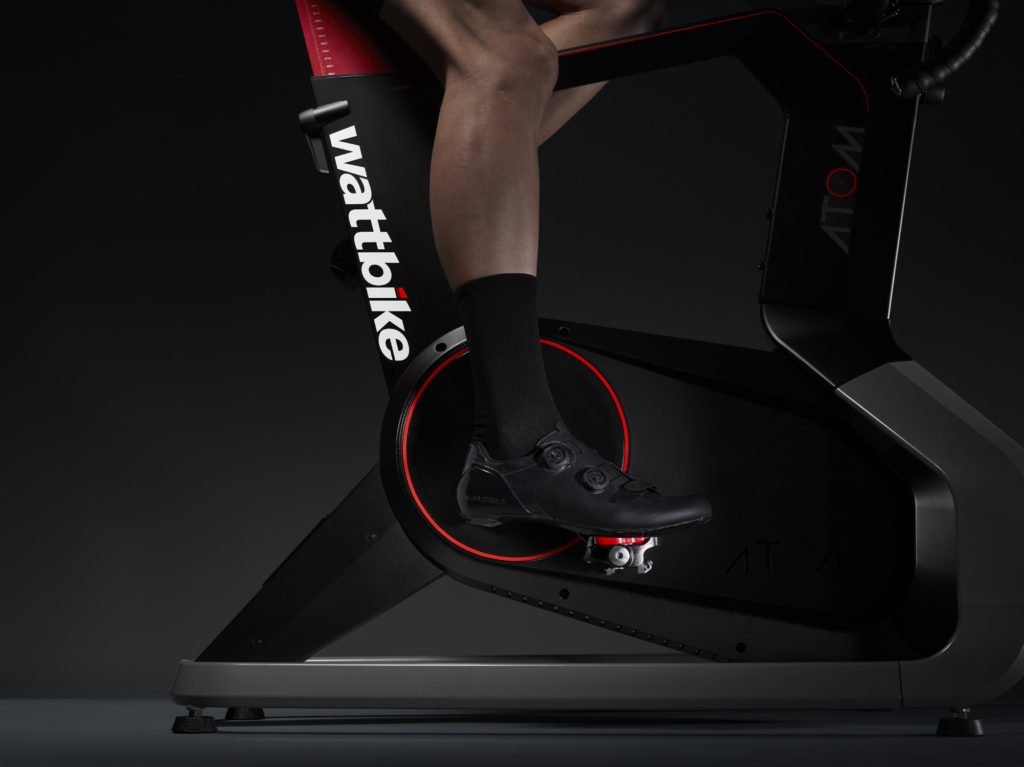 From that base, the new Atom also adds full connectivity with Ant plus and Bluetooth protocols and adjustable magnetic resistance with a power range of 40-2,000 Watts with +/- 2% accuracy. The Atom can also simulate hills of up to 25%. In simple terms Wattbike have effectively put a Wahoo Kickr into a Wattbike chassis.

Of course they’ve done this with their own internal design and engineering but they’ve made a Smart Bike that’s completely compatible with all key training apps and connectivity standards. They’ve also added in some extra niceties like the fact that if you use an Ant+ heart rate monitor, the Wattbike Atom will take that data and translate it into a Bluetooth feed for your connected iPad, which is very welcome.

In order to change the resistance as you ride, the Wattbike Atom has gear shifting buttons and 22 “gears”. 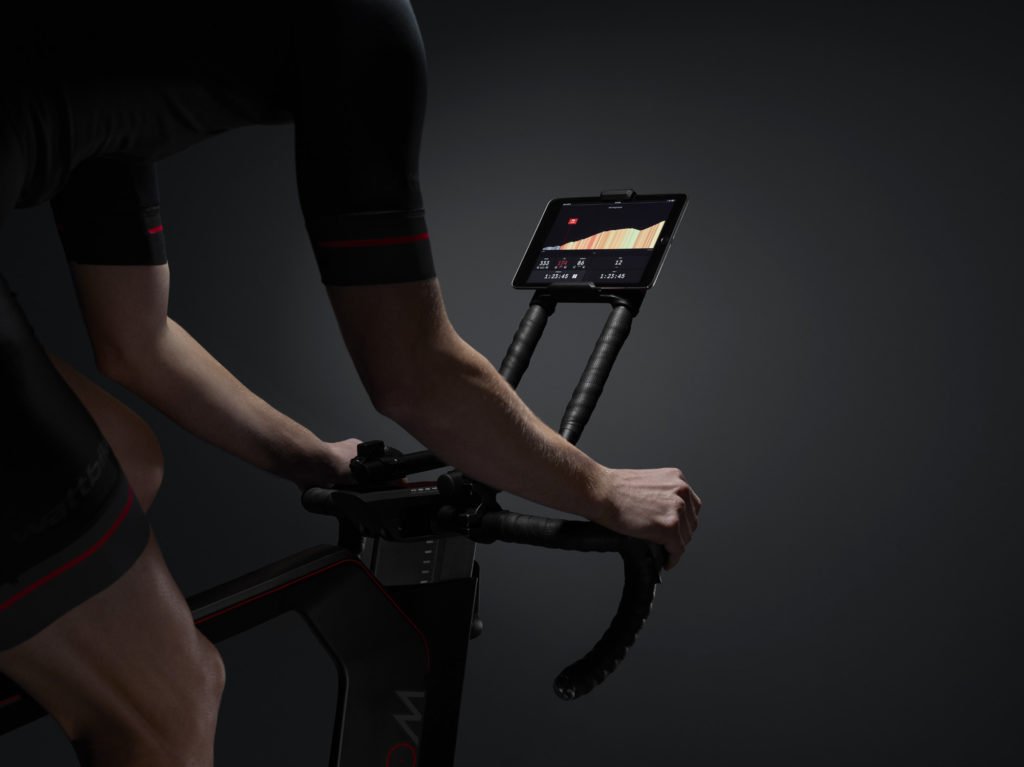 Richard Baker Wattbike’s Managing Director of Consumer products said in the Atom’s press release that “The Atom represents a radical step forward for Wattbike. Our first true home trainer, aimed specifically at cyclists, it serves the needs of the connected rider yet retains at its core our commitment to creating the most technically and scientifically advanced products in the world for improving performance.” From taking an initial look at the info on the Atom, I’d have to agree with the quote. 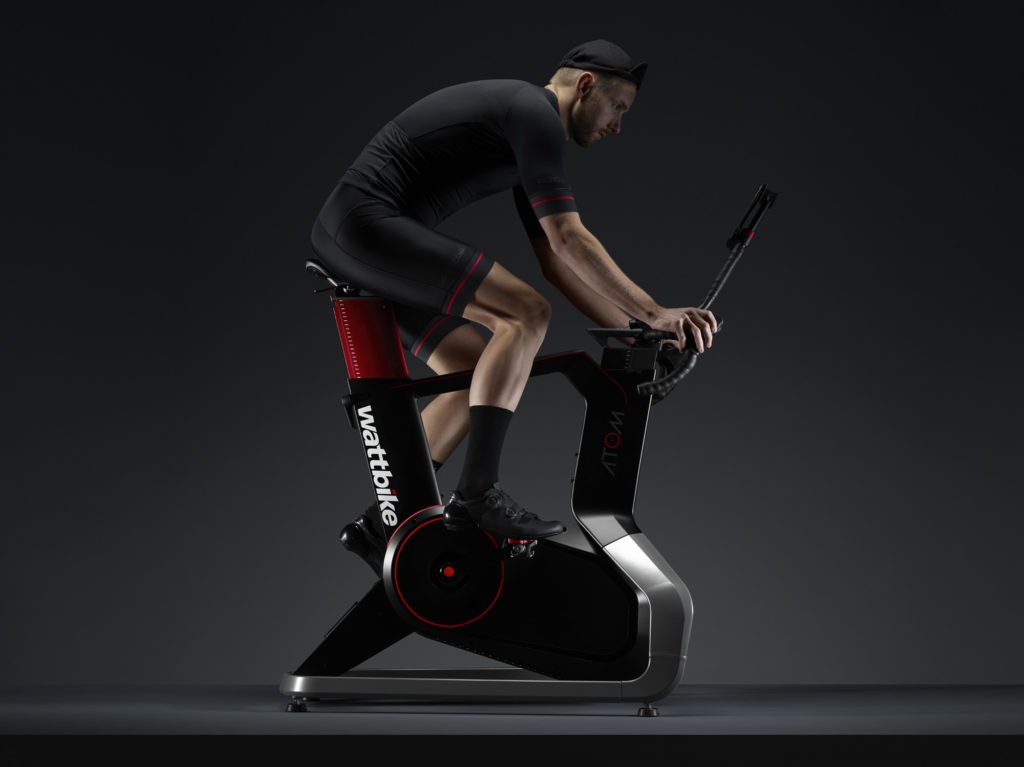 The Wattbike Atom is usefully smaller and more compact than the original Wattbike and is certainly quite a bit smaller than your bike on a turbo, so it’s going to be space efficient & relatively easier to find a space for. Like the original, it’s easy to adjust for different riders and now lets you run your own choice of handlebars too. I did speak to someone once who didn’t buy a Wattbike simply because they couldn’t use their own bars.

One of the only catches I can see with it is that you need a Smartphone or tablet to run it – it doesn’t look like you can run it via your laptop or a desktop computer (which is a shame as an Atom in front of a PC connected to a 40 inch plus TV screen would be very cool). The Atom has a built in tablet holder specifically so your tablet/phone becomes the devices screen/head unit. UPDATE: You can use the Atom with a laptop/desktop with a ANT+ dongle or Bluetooth connectivity – so you’ll see be able to connect up to a big screen TV/Zwift experience with an Atom – great news!

Many of us already have an iPad/tablet/smartphone that’ll run Zwift or the Wattbike Hub application you’ll need to run the Atom with. Wattbike also announced that the Wattbike Hub comes with 6 famous climbs including Mount Ventoux and the Tourmalet free to practice your climbing on. As you might imagine you do need to plug it into the mains, but a battery pack will be available later in the year with a life of 36 hours if you need that. 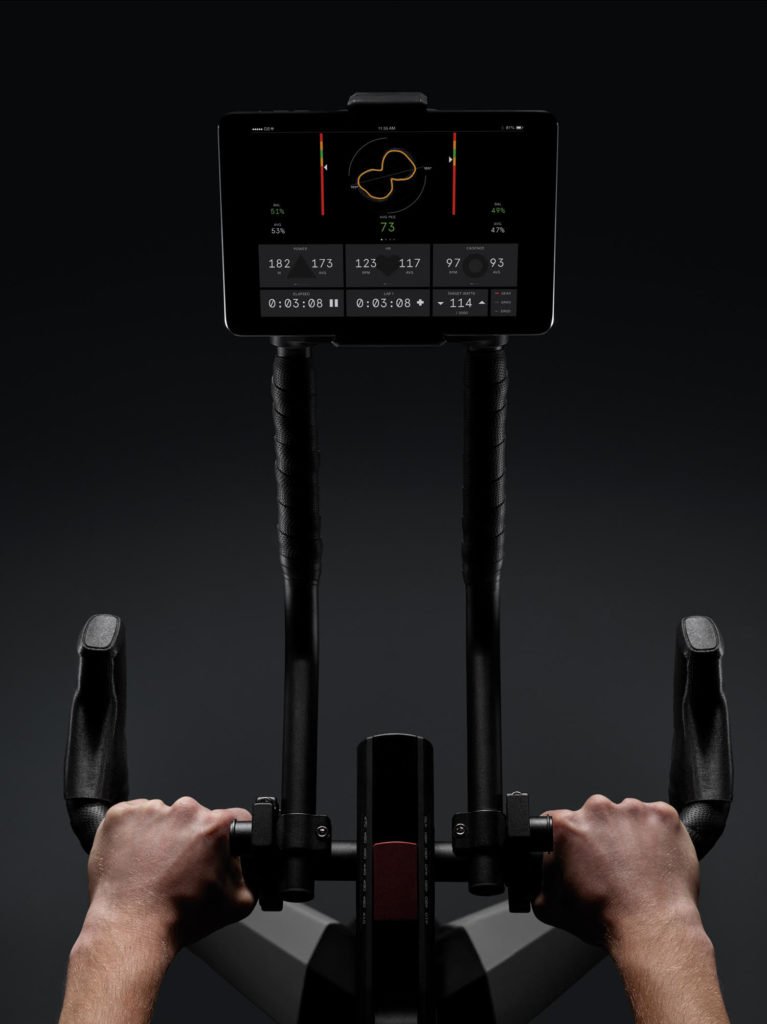 The fact that the Atom is static Smart bike is likely to be a hugely compelling proposition for those households where more than one person trains. My house is a good example. When we had a Wattbike, my wife would sometimes use it and my son is now big enough to use it too. My son has just got into Zwift, so the smart trainer aspect is very welcome. At present my Tacx Neo is only used by me in the house as I’m the only one with a compatible drivetrain & while that’s great for me, it’s a fail for my wife and son. 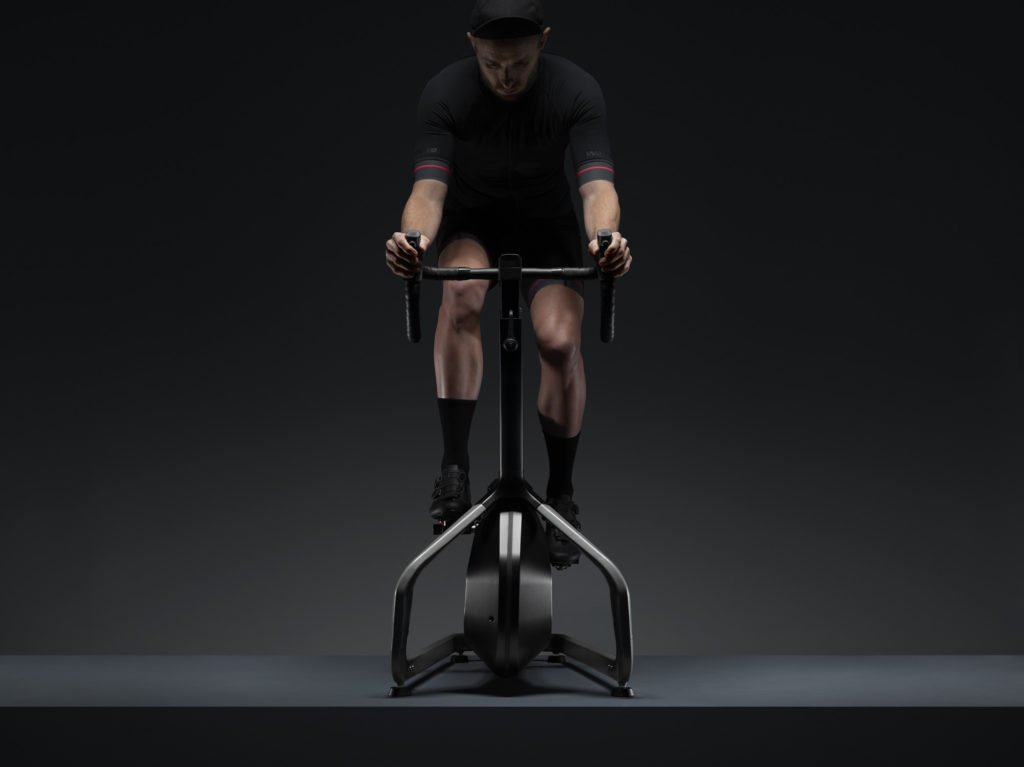 A new Wattbike Atom could quite possibly replace my Neo with a device that 3 members of my family could use. Of course, there are trade-offs to make. For example the Tacx Neo can mimic surfaces and the Wattbike Atom can’t. Also now, for the same price of the Atom at £1499, you can get a Wahoo Kickr and Kickr Climb, which would give you similar resistance and smart connectivity with the added ability to mimic climbs much more realistically.  Personally if they Atom works as well as I’d expect a product from Wattbike to, it could be a winner for my house.

To me the price seems fair/reasonable given the Wahoo Kickr is £1000 and the Tacx Neo retails for £1200. The Wattbike Atom is a complete training bike for £1500 with broadly similar specs. 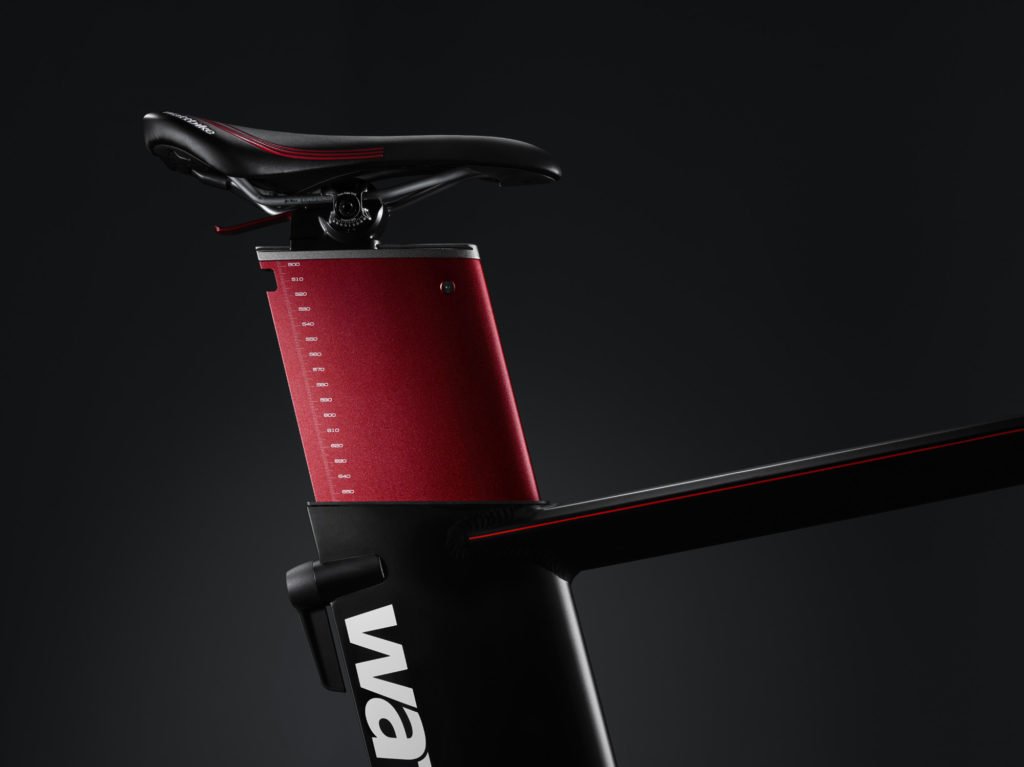 I’ll get to see it in person at the Cycle Show in a few weeks and will update this post accordingly with any new information. Of course, if I can get one in for review, I will. I’d love to try one out. 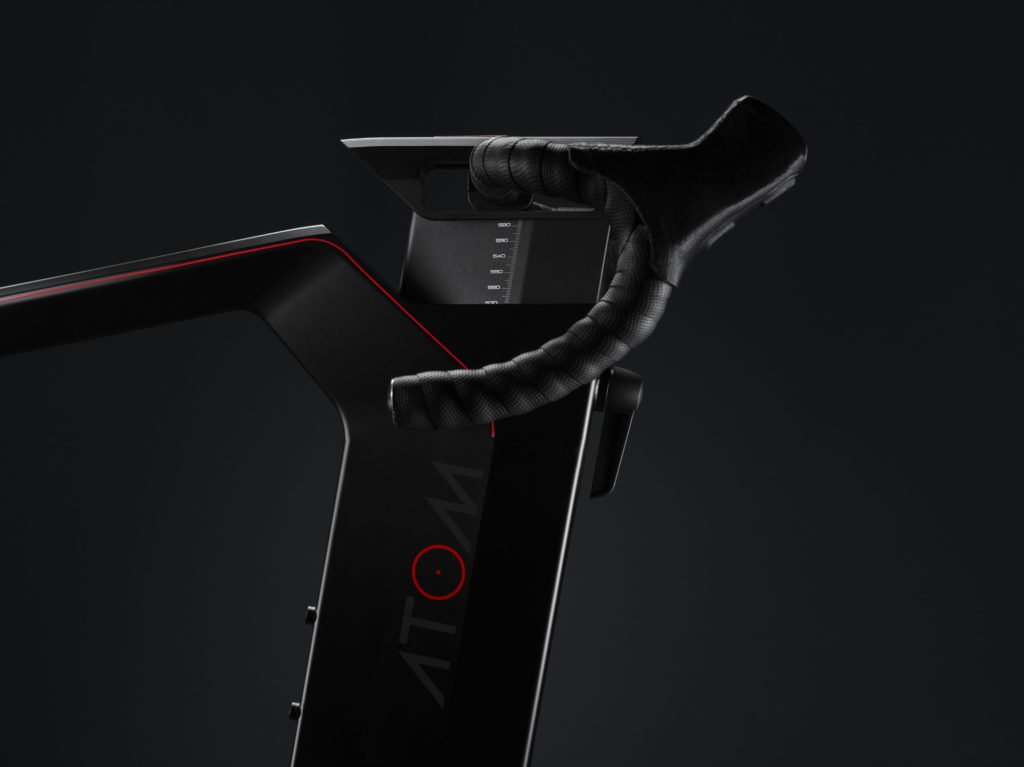