It’s now possible to add Bluetooth connectivity to your Di2 bike and this post is to tell you how and why you might want to do this.

Those of us with Di2 groupsets might not be aware that Shimano are rolling out regular firmware updates as they fine tune and add further functionality to their Di2 platforms. Like any piece of electronics with firmware, it’s generally better to be on the newest version – particularly if you like the idea of new functionality being added.

During 2016 there have been regular updates and to be honest, I hadn’t been keeping up. Previously the best way to update was to use the workshop product designed for mechanics to use (the SM-PCE1) and this is still the most complete method, but it’s an expensive item for occasional use. Another option is to use the internal battery charger (SM-BCR2), which is cheaper but can’t do any trouble shooting. I’ve also found the BCR2 a bit hit and miss at doing firmware updates.

Earlier in 2016 Shimano announced a wireless functionality update including Bluetooth connectivity to enable new features. At a starting point, this functionality allows users to use the new Shimano e-tube iPad app to update firmware, tune shifting – including the new multi-shift feature, error check or add pre-set shift patterns. This functionality is backwards compatible too – so anyone with a Di2 groupset can get this updated ability.

To add Bluetooth and allow for the future capabilities, you need to add two parts for your Di2 groupset. 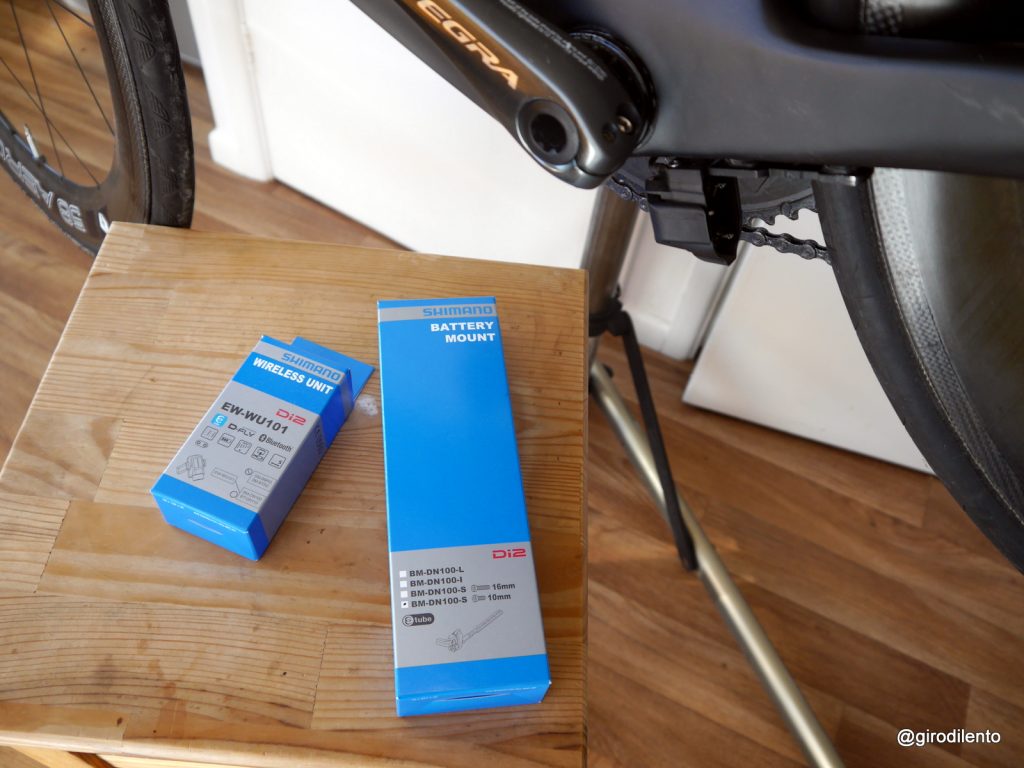 If you’re not already running a wireless sensor, you’ll need an extra cable to add in the new sensor. I used a 150mm cable. 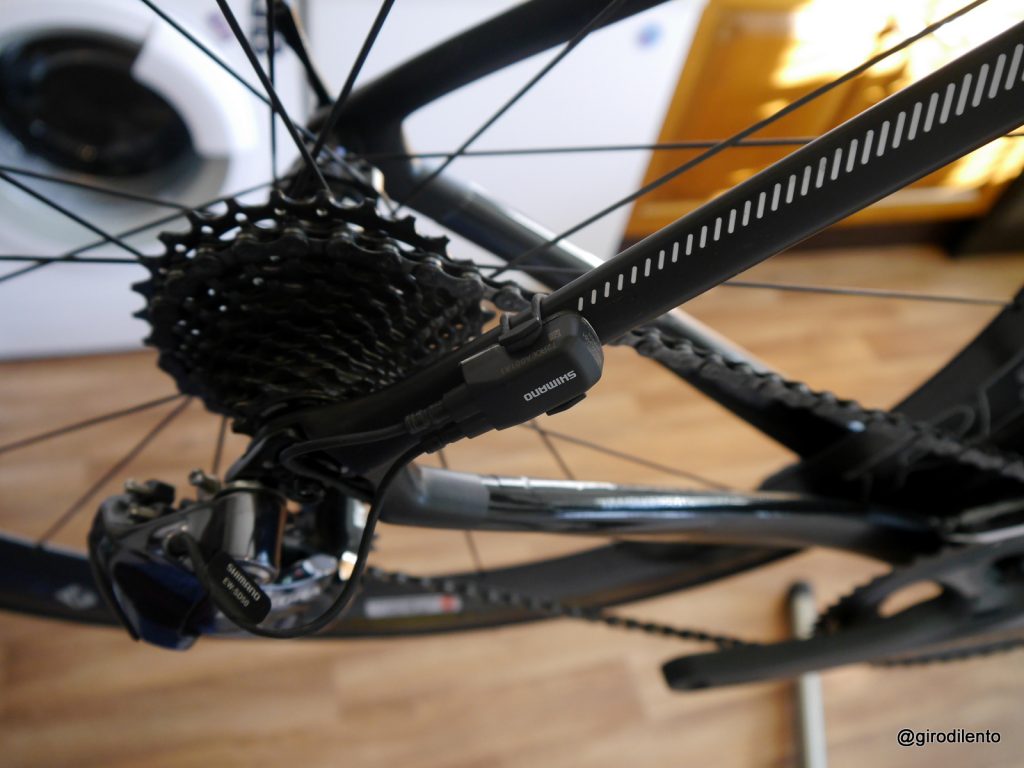 My bike already had the old wireless sensor on the drive side rear seatstay just up from the rear derailleur. My external battery mount is on the non-drive-side chainstay. To replace both units was a very simple job. Firstly I made sure I removed battery and power to the bike, then I un-clipped the Di2 wires from both the battery holder and the existing wireless sensor. The new EW-WU101 sensor is exactly the same size and shape as the old sensor, so it was a 20 second swap over. Swapping battery holders was only slightly more time consuming as all I needed to do was unscrew the two 2.5mm allen head screws to remove and then remount the new battery holder.

It was all done in about 5 minutes. I connected the battery onto the bike – the green light came on at the junction box and the shifting worked exactly as it had.

This was where things got a bit trickier as I experimented via trial and error to get connected. Now that I’ve figured it out, here’s what you need to, to make it much simpler for you. 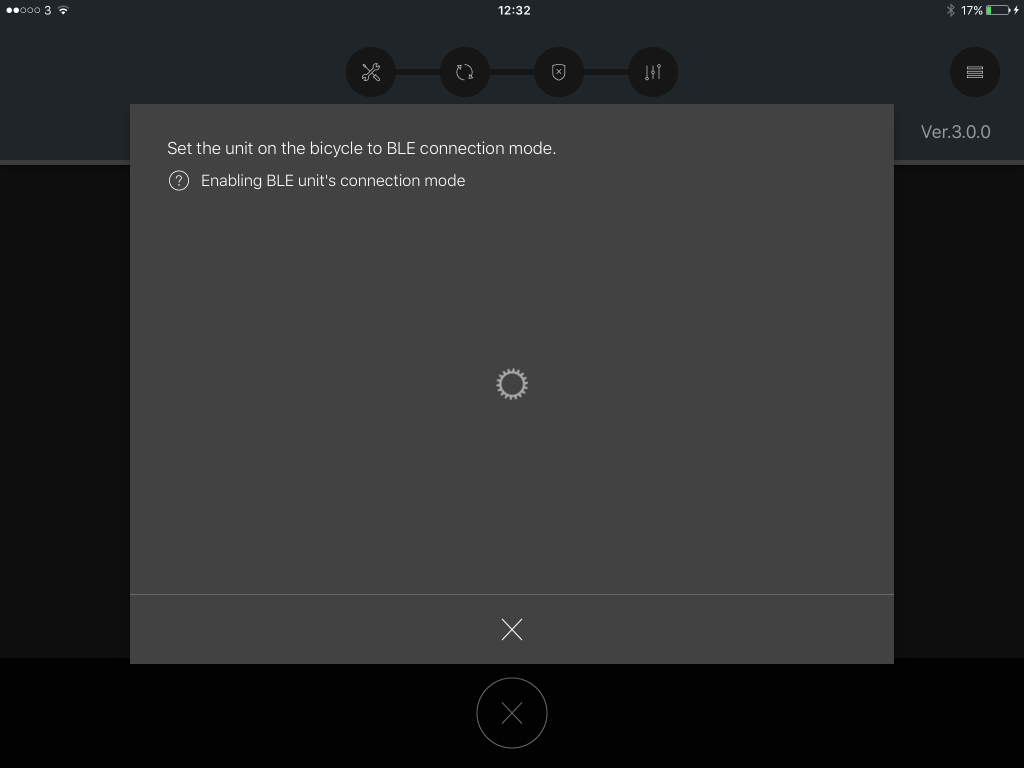 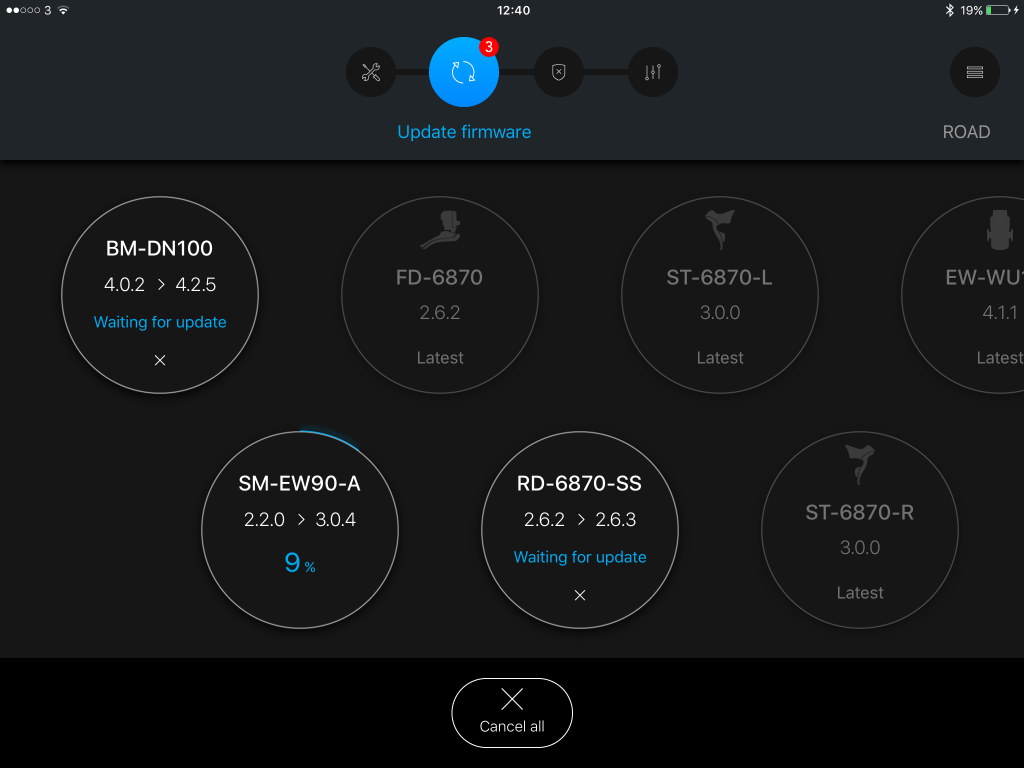 When I was going through this process between point 5 and point 6, I got an error code. This caused a few problems as then the app kept telling me the pairing code was incorrect, whilst not letting me fix it. To fix this I went into the iPad setting menu, looked for Bluetooth connected sensors, found and deleted the EW-WU101 and re-added it. This fixed the problem.

Once you’ve got this far, you’ll most likely have updated your firmware and that’ll be a piece of cake going forwards.

I also had the opportunity to change which shift buttons do which functions and also the ability to add multi-shifting to the rear derailleur – like you can have with Campagnolo shifting. For now, I’ve not played with this but the option is there. 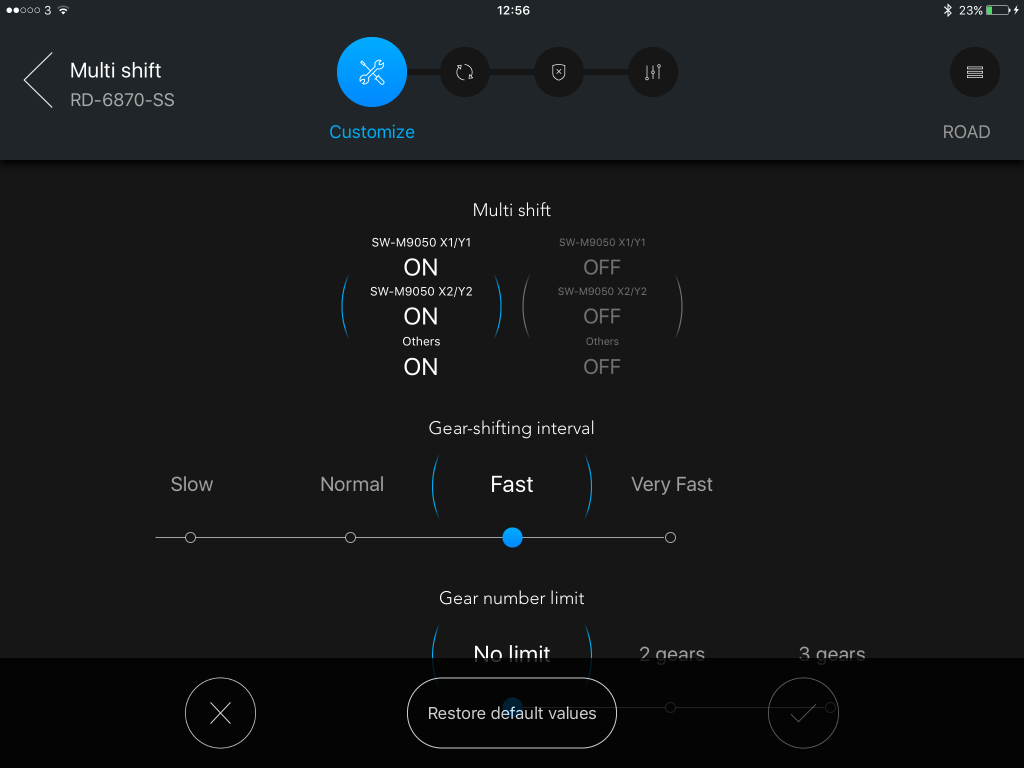 The one feature I was looking for that wasn’t there (as yet) was synchro shifting. It’s available on Shimano’s Di2 mountain bike groupsets and it’s coming to the road ones too – but it’s not quite yet. I’m excited about this as I tried it at the new Dura Ace launch and it was very cool indeed. If you have added Bluetooth to your Di2 bike, you’ll be unable to take advantage of new features like this easily as they become available. Making the investment in the new components will help you keep your Di2 bike (regardless of version) updated with the very latest features.

Early in 2017 there will also be iPhone and Android versions of the Shimano e-Tube apps. We should see more features added around this time.

I’ll write about any further updates as they’re released and as I try them.

If you’d like to check out Shimano’s own announcement on these new products, it’s here.