After 12 weeks with a Tacx Neo, I can confidently say it’s the best indoor trainer I’ve ever used and absolutely deserves its reputation at the leading edge of the Smart Trainer marketplace. It’s quiet, smooth, mimics real road surfaces and works faultlessly with Trainerroad and Zwift, the two most popular platforms as I see it.

In some respects my 12 weeks with the Tacx Neo were an absolutely pleasure. Sometimes a sweaty, panting, painful pleasure but the Neo performed faultlessly and transformed my indoor training experience as I had suspected it might.

In Tacx’s promotional video for the Neo below, they describe it as the first real direct drive trainer because the Neo doesn’t have any internal drive belts or a flywheel like the Wahoo Kickr and Elite Drivo.

Instead of flywheels and belts, the Neo features 32 Neodynium magnets and power/resistance is adjusted by the amount of electricity through the magnets. The Neo has a powerful motor that can provide over 2000 watts resistance and the devices computer checks what the cyclist is doing on the trainer 1,000 times per second.

This design with the computer controlled motor and magnet array allow Tacx huge flexibility in software control of the Neo. This is shown by the fact that they’ve now worked out how to mimic changes in nine different kinds of road surfaces.

This design and construction method is also a reason why the Neo is almost silent in use. The noise doesn’t change much at all and even riding as hard as you can it’s quiet enough to have a normal conversation with someone – I know this as my kids regularly came and asked me inane questions whilst I was riding intervals! 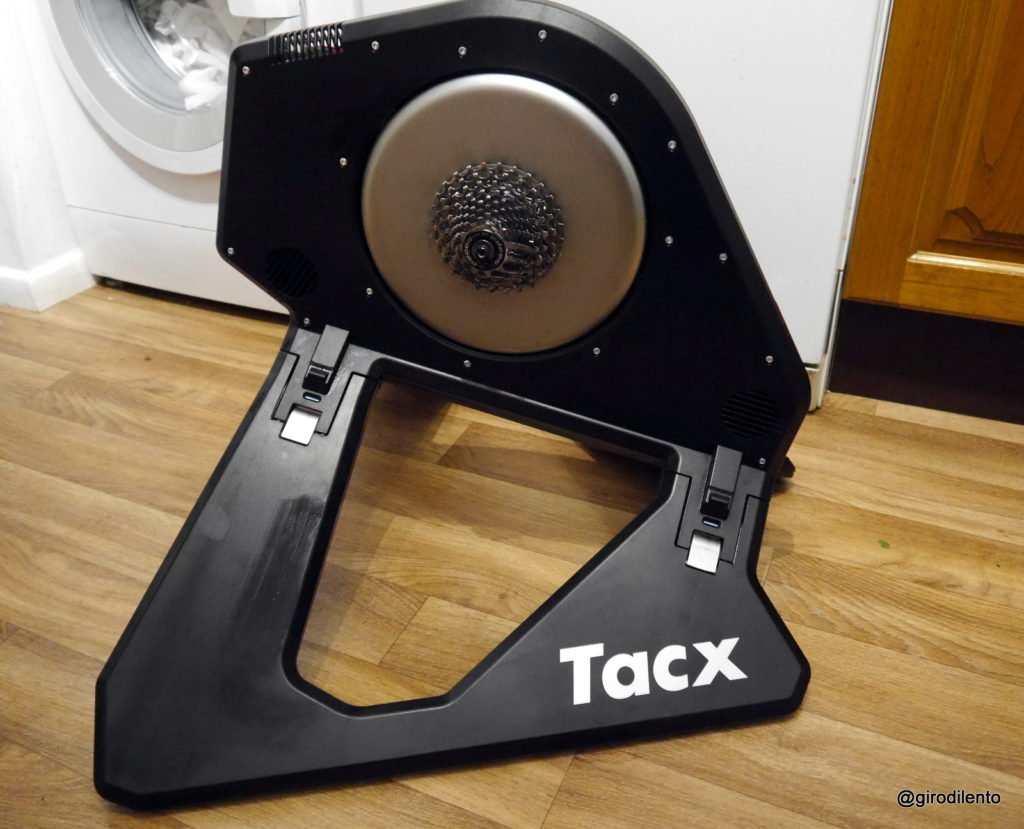 In use, it’s not only quiet but delivers progressive and smooth power changes as you ride. I’d not used a trainer in “Erg” mode before the Neo. Erg mode is used a lot in structured workouts and what happens is that as the target power changes the trainer increases (or decreases) resistance to match the power output to the cadence you’re pedalling. This happens smoothly in a couple of seconds when your interval changes. On my first ride on Zwift doing a workout, I didn’t realise how Erg mode worked and changed all the way up to my highest gear, ending up riding at around 130rpm and couldn’t understand why my power had stayed at 150 Watts no matter how fast I pedalled – then the penny dropped – erg mode. It even works for idiots!

Erg mode was a brilliant companion on Trainerroad too. I spend a lot of time using the Neo with Trainerroad, in fact I completed a 6 week training block with it. It was terrific, the only challenge of Erg mode is when you suddenly have a short large spike in resistance for a few seconds, I found my cadence dropping and the resistance would keep building to force my power output to where it was meant to be. That’s not a Neo issue though but it sure made those spikes a challenge. 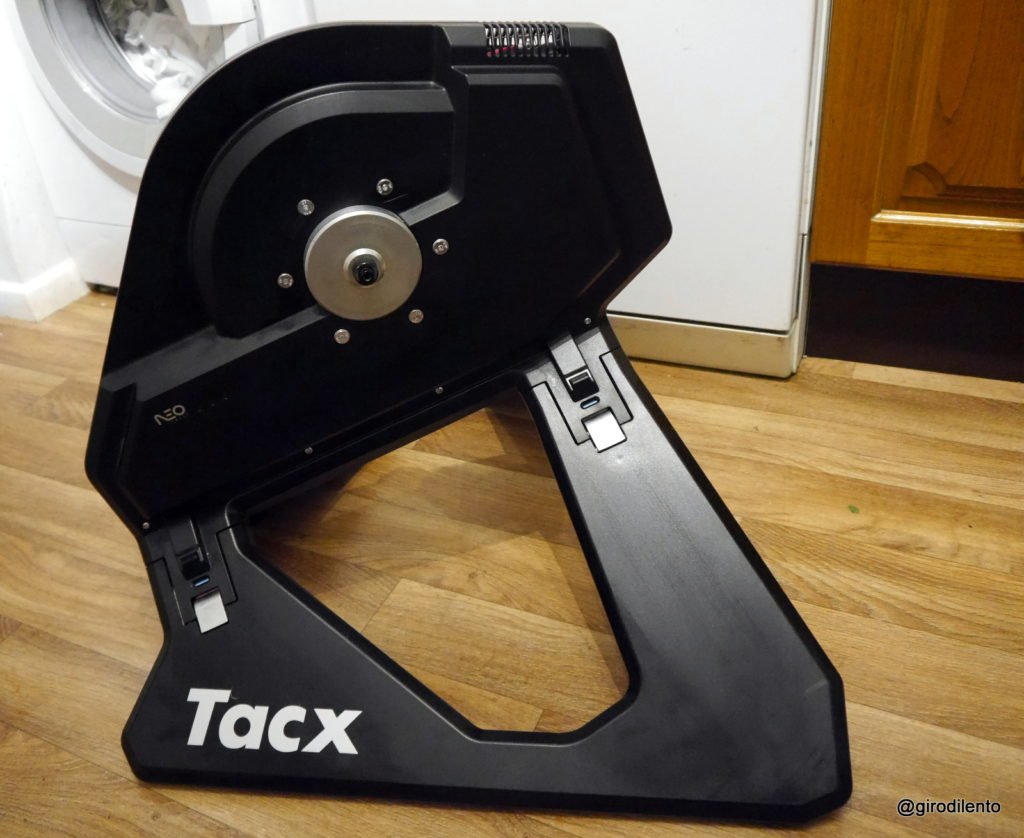 I had no way of testing the power accuracy but from reading other reviews extensively, the consensus is that the Neo is very accurate and particularly so under around 400 Watts and frankly that’s perfect for me because I don’t spend much time above that. It’s rated at 1% accuracy and up to 2200 Watts, which is very impressive. It doesn’t require any calibration either – you just get on and ride it.

The Neo is able to simulate climbs of up to 25% too, which you can get a good feel for on Zwift. My Zwift experience was transformed by the Neo. Gradients felt real as the resistance cranked up with the slope and vice versa on the descents. Then add in the cobbles and it was a complete delight to use. Riding up the Watopia Mountain course when it kicks up to around 15% really felt like hard work. In Zwift’s settings there is a slider for smart trainer users that allows you to make the climbs harder or easier. The default setting is right in the middle and I have to confess I found that challenging enough for now. If you like Zwift, you’ll love it with a Neo. Simply brilliant.

As I mentioned earlier, the Neo is the only trainer that can mimic ride feel and it’s all thanks to that direct drive motor and magnet system. The computer controlling the magnets can send pulses through them to provide a riding effect that mimics the feel of riding on the road. Now, I can’t lie – it’s not the same as riding on real cobbles (which can shake your bottles out of their cages) but it does feel like riding over “small” cobbles. It’s a bit of a gimmick but it’s a cool one and it adds that little bit extra to riding on Zwift in particular.

If you have an iPad/IOS device you can download a free sample from the Tacx video library which is a ride over some Belgian cobbles – it actually felt a bit harder than real life to me in that I was working hard on the smooth tarmac before the cobbles to get up to a decent speed. Again a nice experience if a bit gimmicky and not something I’d personally choose to spend money on (as you can pay to download other sections of road to try out).

The Neo’s Ant Plus, FE-C & Bluetooth connectivity means you can connect virtually any app or device. One benefit of this is that with a growing range of software to connect the Neo to, you’re not never going to struggle with applications to use it with. One particularly interesting possibility is that it should be possible to import a model of say an alpine climb into software and then ride this virtually on the Neo with it automatically adjusting to the slopes. So for example, if you’re training for the Etape du Tour, you could ride the route in your garage as part of your training.

The looks of the Neo are strking and attractive thanks to the wings which fold up to allow storage. They’re also key to the stability and to how the Neo has a touch of flex from side to side as you ride. According to a story I read on Titanium Geek, Tacx specifically chose the kind of plastic for the Neo to offer just a touch of give as you ride. It’s a heavy device, so whilst it’s relatively straight forward to fold up, it’s still a bit awkward. I was fortunate enough to have space to just leave it set up in my garage. 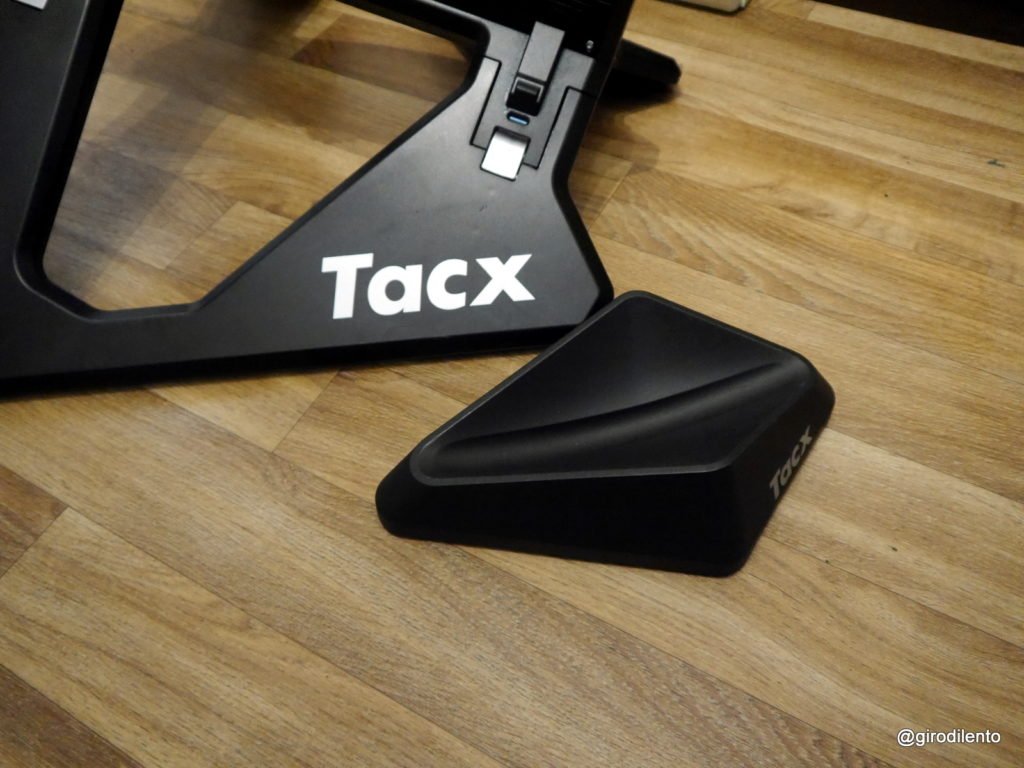 Front wheel riser block is included in the box

To get the main benefits, you need to plug the Neo into a power socket whilst you ride but it will run without power as a stand alone trainer. In this case your pedaling generates the power to make it work. I did try that but it’s much, much more fun to connect it to Zwift or Trainerroad.

The obvious catch for most of us (including me) is the high retail price of £1200. The street price is much lower at around £1040 most of the time, which is much closer to the Wahoo Kickr v2. For me though, the Neo is quieter, arguably more accurate (depending on which review you read) and has added aspect of ride feel. For me that’s easily worth the £40 or so difference in street price. In fact if you shop around, I seen the prices drop to less than £900 but these offers tend to come and go. So it’s possible you might get lucky on price but most of the time the price sits around the £1,000 mark.

I’ve written before about how I don’t see £1,000-ish as being too much. I could easily spend 150+ hours a year on a Neo and it’s a direct replacement for a winter bike for me. In fact I mainly rode my best bike with Di2 on it. On the Wattbike I had on loan for 2 years, I rode 5000km. Also I don’t own a separate power meter and as a decent one still starts at least £600, a new state of the art turbo including an accurate power meter look decent value around £1,000 especially considering the use I’ll get out of it.

So what are the downsides?

Well, it’s heavy and a bit awkward to move about. You don’t get a cassette with it (but many of us will have a spare or two). It’s only 9-11 speed compatible, so in my house, I’m the only one who can use it as my kids and wife’s bikes are all 8 speed. It’s a bit of a hassle getting a bike on and off it (like any direct drive trainer). Some people have had issues with clearances with Di2 derailleurs scraping against it on the largest sprocket – I did briefly but adjusting the gear indexing solved that. If you want to run it with a through axle bike, you’ll need a separate adapter kit, which adds a bit more expense. Another issue is that some people have reported quality control issues, so get round that by buying from a retailer who you trust with returns/support (e.g. your local bike shop,  Amazon, Wiggle, Evans Cycles or the like)

I definitely plan to buy one. Since it’s gone back, I’m back to my old “hateful” fluid trainer and I hate the thing even more now, it feels like going back to the dark ages.

Supply has been a bit patchy as the Neo has been such a big success that the Tacx factory is working at 100% capacity and can’t keep up with the orders. If you can be patient & indoor training is part of your regime (or you’re just really keen on Zwift and quiet trainers), I believe it’s well worth the wait – highly recommended!

My thanks to ZyroFisher for the loan and if you’d like to also read my first look post, it’s here