I’ve been off my bike for the last few months with a back injury, so when Vee Tire kindly sent a pair of Apache clinchers to review, I asked Damien if he’d ride and review them. Damien’s occasionally reviewed products for this site before and as luck would have it, he needed some new tyres.

Tyres are a critical component on our bikes as they’re our connection with the road and I’ve noticed that many of us find a favourite make and model and then stick with it, often for years. I like trying new products and also in challenging my own views, so I’m always keen to ride new tyres as you never know when you’re going to find a new favourite. Even if you don’t, it’s nice to re-confirm your thoughts.

So on that note, I’ll hand over to Damien…..

I’ll be honest and say that prior to this kind offer, I hadn’t really heard of Vee Tires. However, it turns out that the company is a spin-off of Vee Rubber Group – Thailand’s leading tyre manufacturer. Vee Tire Co was launched in 2013 to supply tyres direct to consumers around the globe. You can read more about the history of Vee Tire Co here. Impressively, the Vee Rubber Group makes 25 million tyres a year, so they should have a great deal of knowledge and expertise to bring to their bike tyres. 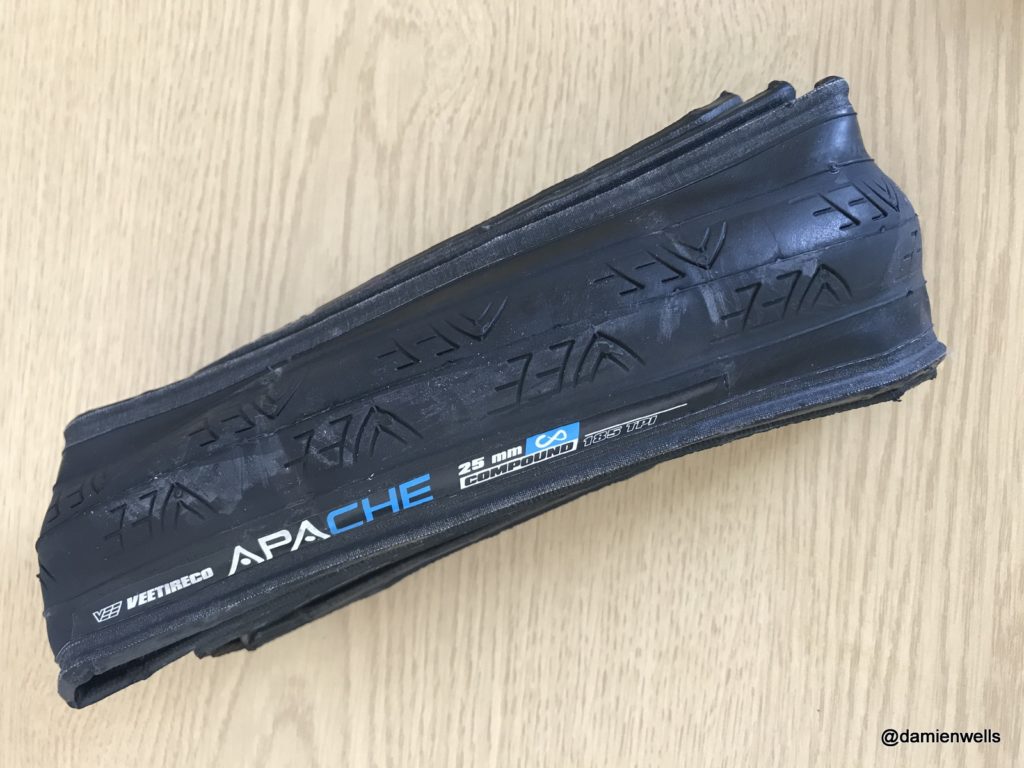 Vee Tire’s Apache is the company’s flagship road cycling tyre. It’s been designed for all weather conditions and made using proprietary Continuum compound to be fast and durable. Ideal for the UK then. They feature a folding bead, a 185 TPI (threads per inch) construction, a “VEE-cut” tread pattern to clear water away in the wet, and are directional to increase traction says the maker. The Vee Apache is available in 23, 25, 28 and 30mm widths (it’s the 25mm version we’re testing). It’s also possible to order them with Vee’s Synthesis casing (which is the version we have). The VEE pattern is based on the company’s logo, which is neat. As for its effectiveness, I’ll report back once I’ve ridden the things in the rain. The retail  price for the Apaches in 25mm with the Synthesis casing is £39.99, the standard casing is £5 less. The 28 and 30mm versions also retail for £39.99 each. 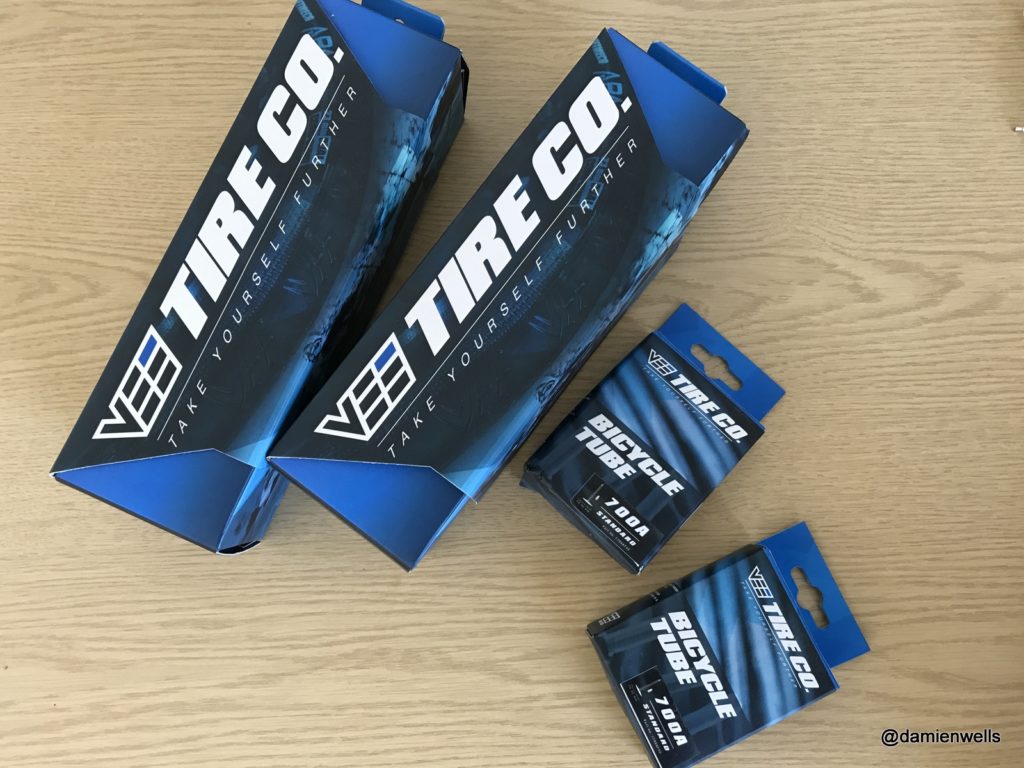 The tyres are attractively and neatly packaged in well designed and thought out individual boxes, carrying decent graphics. As good as they look, if I’m being picky, I’m not too sure that the written signposting on the boxes would help anyone uneducated about the brand learn too much about the contents. The Apache is a well specified tyre featuring lots of technology and my feeling is they could be making a bigger deal of this on the box.

Out of the box

The tyres are marked with Vee Tires’ B-Proof logo, denoting they incorporate an Aramid Belt for added puncture protection without a weight penalty (by virtue of the material’s paper-thin thickness). They also carry the “Synthesis” mark, indicating a synthetic casing to confer extra puncture and cut protection to the sidewall. A further logo on the tyre, tells me that the tread area is constructed using Vee Tires’ Continuum Compound to offer low rolling resistance and high durability.

I’m ashamed to admit I didn’t weigh them before fitting (Doh!), but the quoted weight is a competitive 250g per tyre, making them pretty comparable with similar tyres from other manufacturers.

Fitting the tyres was a bit of a struggle due to the very snug Kevlar bead but these are not tubeless ready tyres. As I fitted them I noticed manufacturer’s recommendation of at least 100psi inflation but the website says a minimum of 85 psi. I’m not the world’s most experienced tyre reviewer, but one of the reasons I originally moved to 25s was to run lower pressures and, hence, gain a little more comfort. After I’ve run them at the manufacturers’ suggestion, I’ll lower the pressures and see if there’s any noticeable effect. 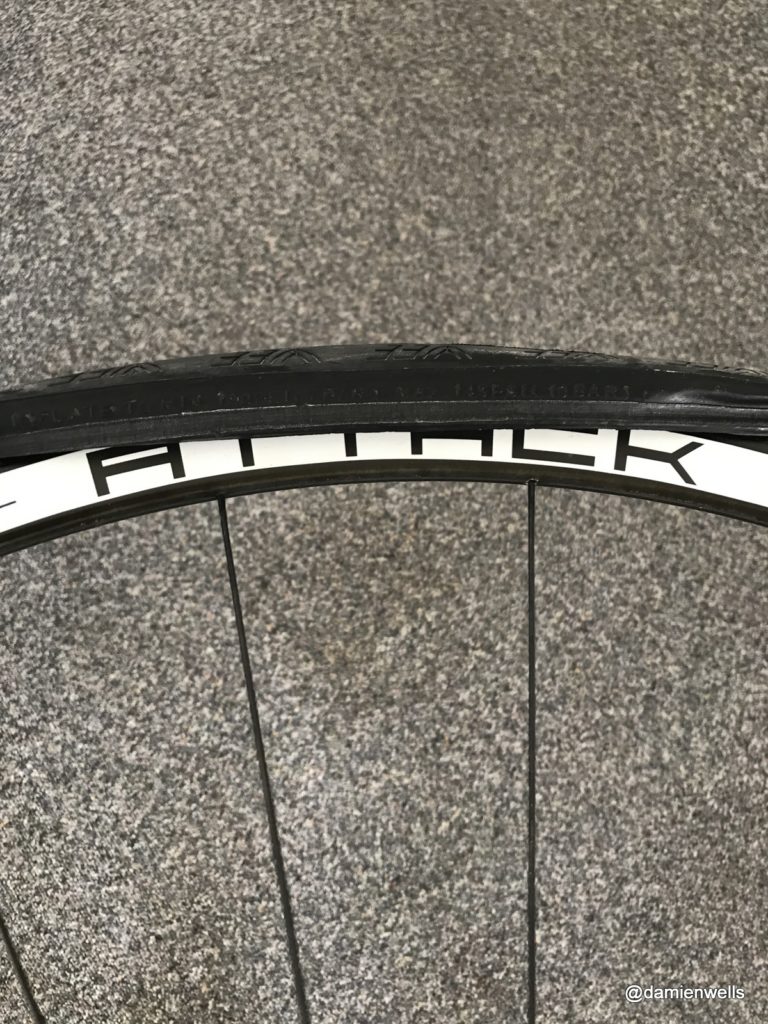 Looking down from the saddle at the wheels with their new boots fitted, the tyres appear narrower than the tyres they replaced on my bike. Of-course that could just be an impression. The incumbents had been there a long time and were pretty squared off. Additionally, the wheelset is not a modern, wide design which no doubt doesn’t help. I think I’ll have to borrow Scott’s calipers out and see how they measure up. They also seem to have a much lower profile than the previous incumbents which may help with grip when leaning the bike. 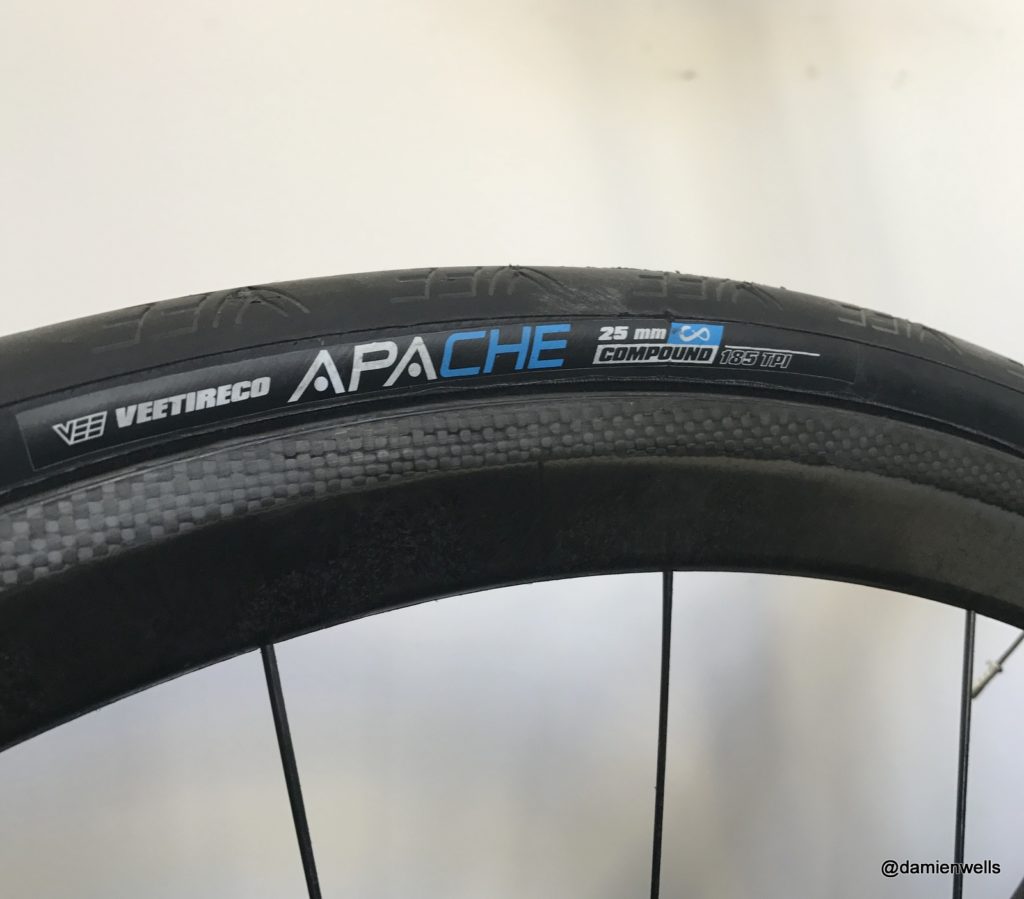 Having got them on the bike, I think that Vee Tires Apache’s look very smart and it’s going to be interesting to see how they perform. I’ll report back soon.