After 10 weeks riding and over 700km I’m ready to share my Wattbike Atom review. In short, I believe that Wattbike have successfully joined the smart trainer game with a product that feels a lot like a traditional Wattbike but with the “smarts” to work for the Zwift/Trainerroad generation. 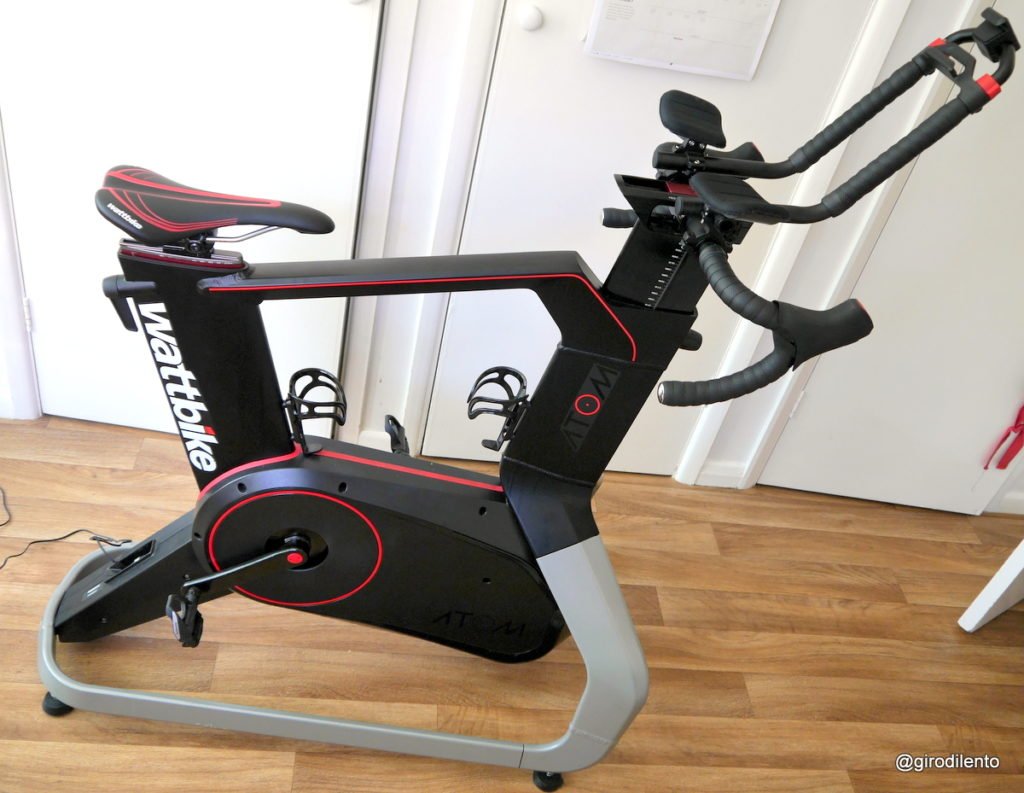 As mentioned in my first look post, the original Wattbike was a hugely successful indoor training bike however when the Zwift generation arrived, it couldn’t compete with the automatically adjusting resistance that came with it. Wattbike went away and reimagined the original bike for a new smart generation but brought some other good thinking with it.

The first thing to notice is that it’s much better looking than the original – more contemporary to fit in the home environment, where it’s designed to be used. As part of the slick redesign, it’s been slimmed down with respect to the physical footprint and it’s certainly more compact (particularly in length) than my bike on a smart trainer. If I was doing my training in my house and said to my wife, which would you prefer to be on display an Atom or a bike on a turbo, the Atom would be an easy winner.

Like the original Wattbike, it’s easy to adjust for multiple users and to personalise the fit. In fact it’s better than the original in that you can swap out the handlebars on the Atom, which you can’t on the original.

The built in tri-bars also double as a tablet holder and whilst you can use a smart phone or a computer to control the Atom fine, it’s nicest to use with an iPad in my opinion. I mainly used it with the dedicated Zwift PC I have in my garage and mostly using Ant+ 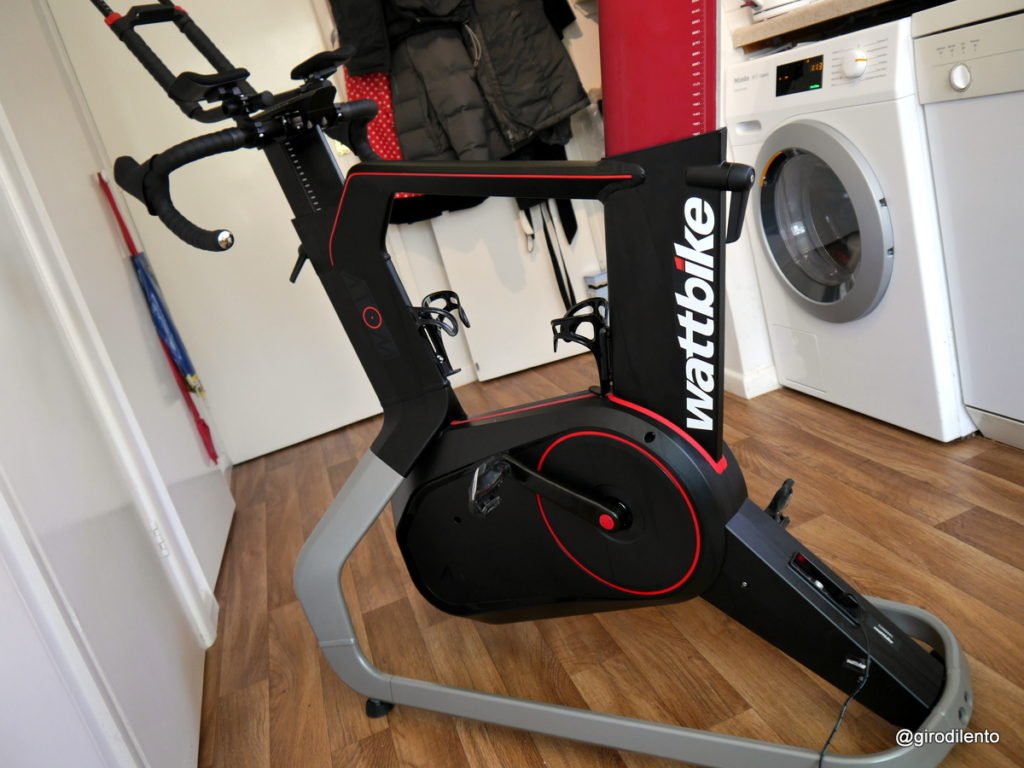 Speaking of connectivity, the Atom is compatible with Ant+, Ant+ FEC & Bluetooth Smart control. So it’s well set up to connect with the majority of popular training platforms such as Zwift, Trainerroad or the Sufferfest, to name three of the most popular ones. I used all three during my time with the Atom.

The more time I spent riding it, the more I enjoyed it. It’s fair to say that early on after it’s release the software/firmware for the Atom wasn’t quite up to the standards needed. I was happy with the hardware of the product and relatively relaxed about the slightly off riding experience because I knew that the riding issues were all software related, which meant they were all fixable. I was also very encouraged by how hard Wattbike were working to improve the ride. In the 10 weeks I had the unit, there were three firmware updates and there’s been a bunch more since I sent the one I had back. 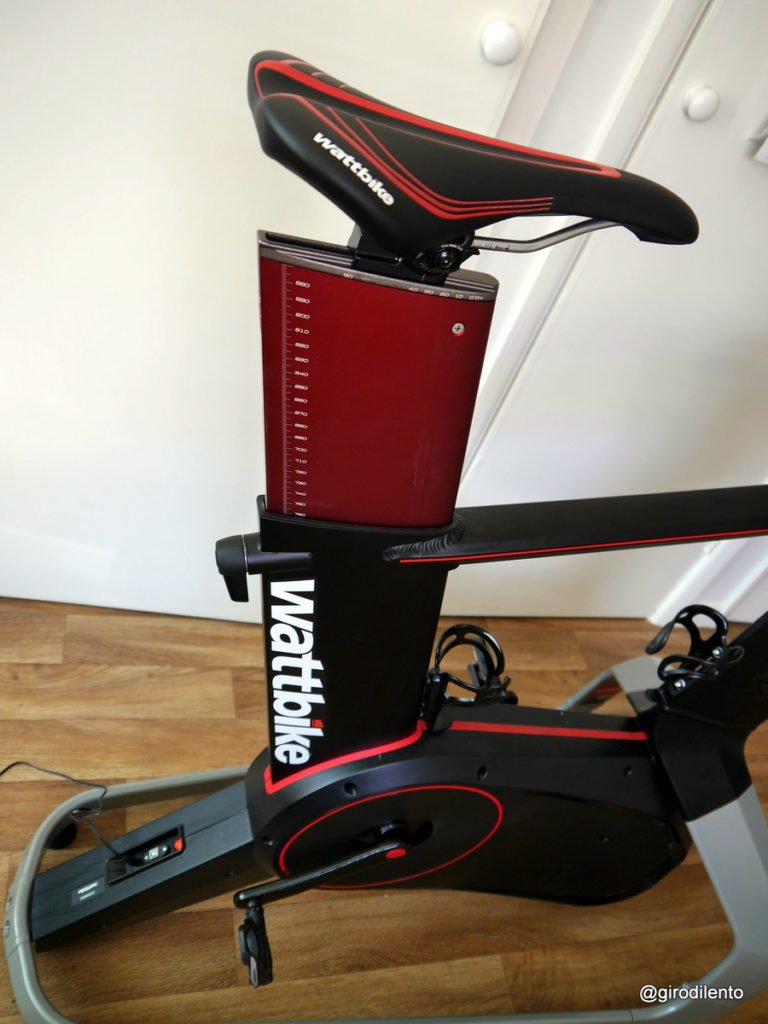 A big complaint was the Zwift experience and the lag as the terrain changed before the Atom adjusted. It got better while I had it and following online groups it seems that it’s much improved again. I have a friend who has one and he’s also confirmed that the Atom is working much, much better with Zwift of the newer firmware. Updating the firmware is easy too. All you need to do is keep updating the Wattbike Hub app on your chosen device. Each time there is an update, there is a new firmware. To update, connect your Atom to the Hub app, click on just ride and start pedalling. If there’s an update it will notify and you and just follow the instructions. Easy. 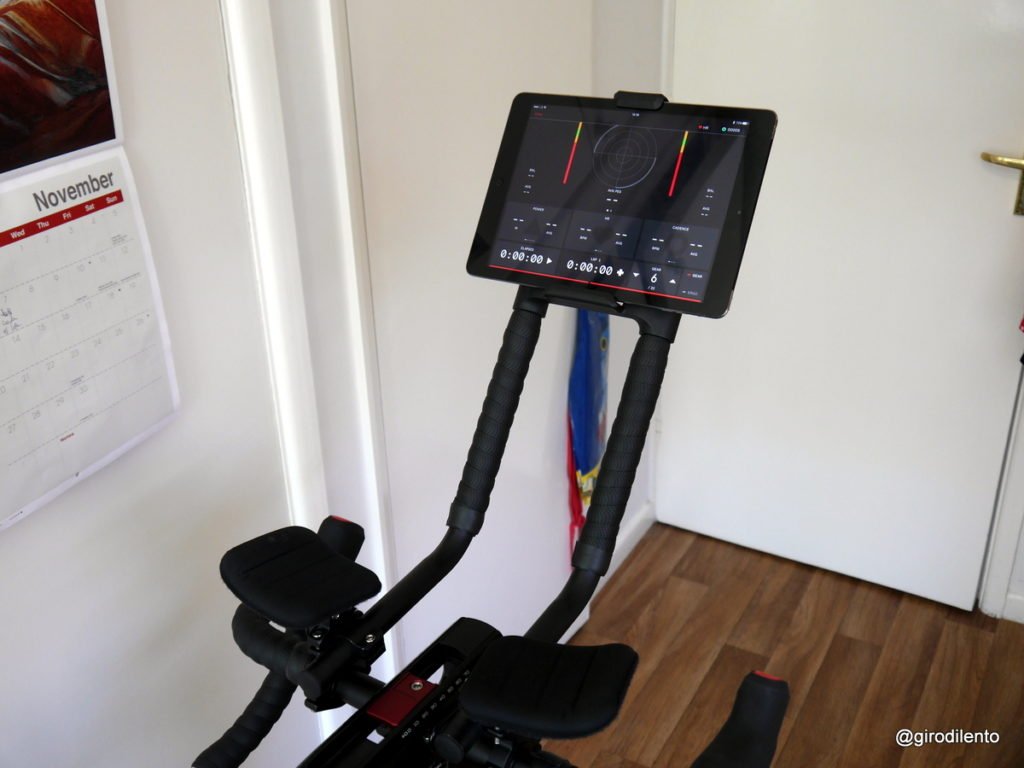 It’s also worth noting that the workouts and training plans contained in the Wattbike hub app for free are well proven and excellent. I made the biggest gains I’ve ever made following Wattbike’s Sportive Training plan number 3. It’s a nice bonus to owning an Atom, even if you think you’ll be using other platforms. They’re certainly an easy way to get going if you’re not bothered about Zwift or Trainerroad etc. 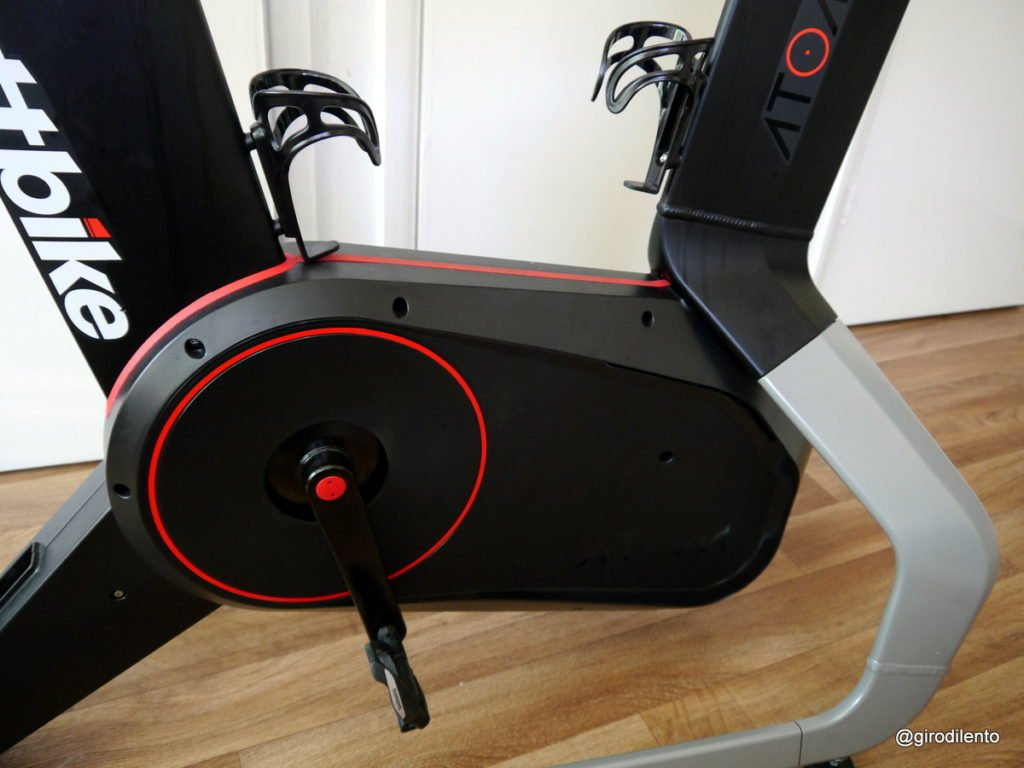 The Atom that I had to use was an early production sample. I found it noisier than I would have liked and it was certainly noticeably noisier than my own Tacx Neo. In dialogue with Wattbike they told me that the production sample I had contained a different motor unit than full production Atoms. They said the changed motor to reduce the noise and it should be no noiser than a Wahoo Kickr. I’m using a Kickr at present and whilst it’s also noisier than my Neo, the noise levels are low and not intrusive. 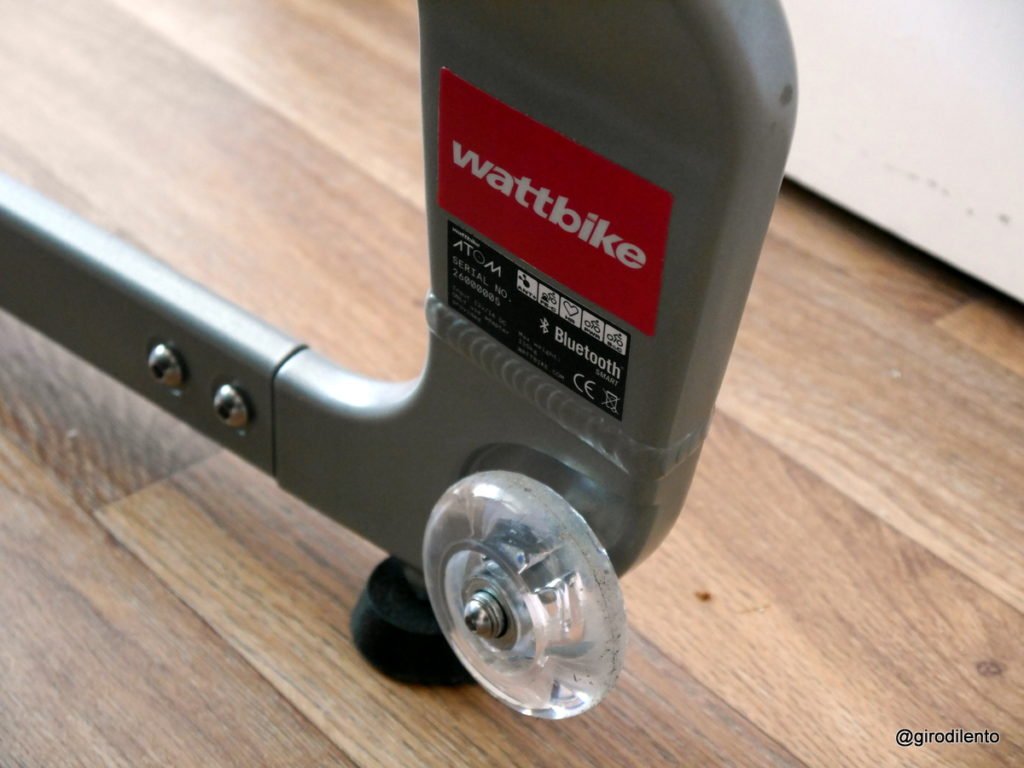 In summary, Wattbike have achieved their goal of re-imagining the original Wattbike for the smart trainer generation and done so in a compact and more aesthetically pleasing package that will blend more easily into most home environments (certainly more than a bike on a turbo trainer will). Depending on your needs, it could be the perfect solution for a lot of people. Judging by early demand, it looks like there are a lot of people who’re sold on it too.

An Atom is perfect for you if want a training bike that:

The Disadvantages of the Atom:

By weighing up the pro’s and cons above, hopefully you can decide if an Atom is the right product for you. I certainly think it competes well with every other belt driven smart trainer out there, which includes everything except a Tacx Neo. Thanks to the Neo’s design using electromagnets rather than a drive belt, it’s quieter and has the extra feature of being able to mimic road surfaces. For the most particular of riders, that might make the difference and at present it’s the only trainer on the market that can do it. 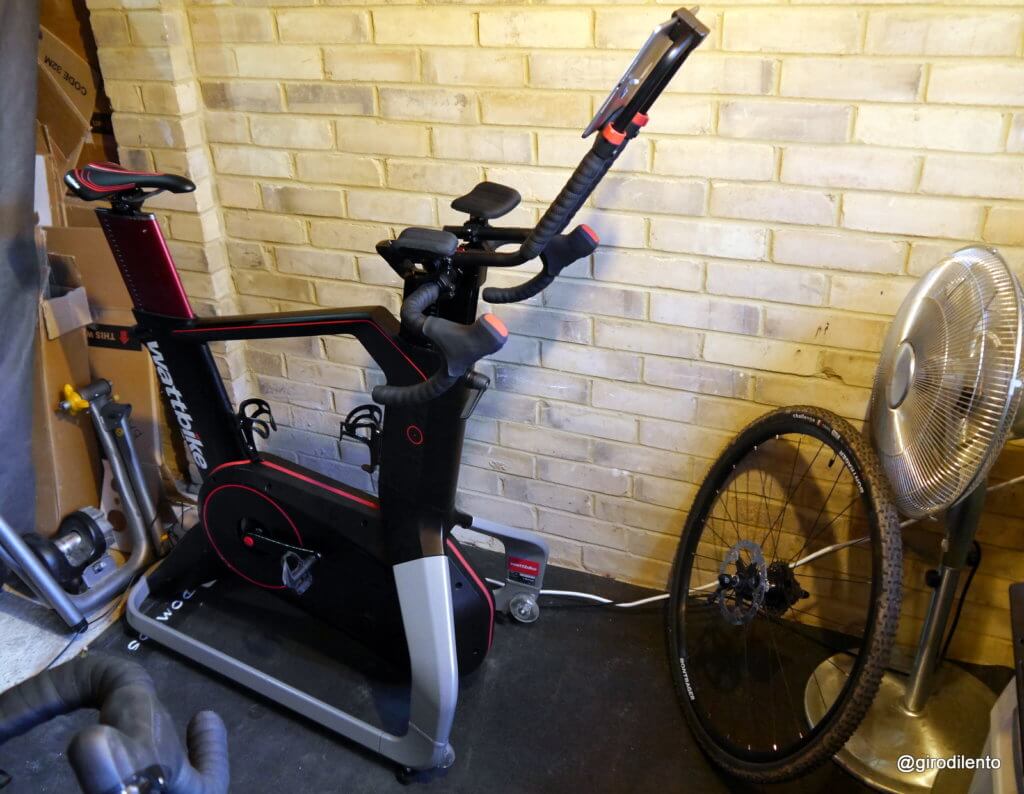 If you have any questions, let me know in the comments and for more information on the specs or to buy an Atom, visit Wattbike here: https://wattbike.com/

If you’d like to read more about my time with Wattbike, including the 2 years and 6,000km I spent on the classic Wattbike, check out those posts here: https://girodilento.com/category/wattbike/