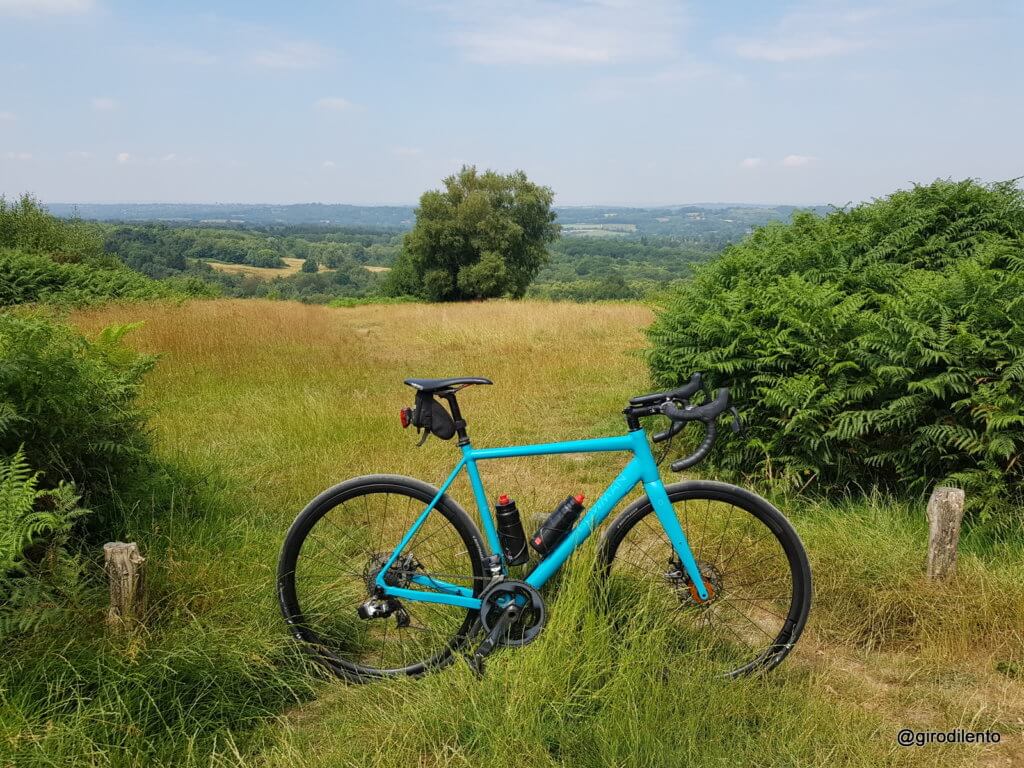 Whether you look at it as a Road Plus bike that you can ride over (relatively) rough ground or just as a well thought through Endurance Road Bike, the new Bowman Pilgrims Disc is a terrific ride and is a a fine choice for almost everyone except perhaps crit racers (who can choose the Palace R instead).

Earlier this year, I spent some time at the London Bike Show looking at and talking through the new Bowman Pilgrims Disc (and you can read find out what I learnt here). 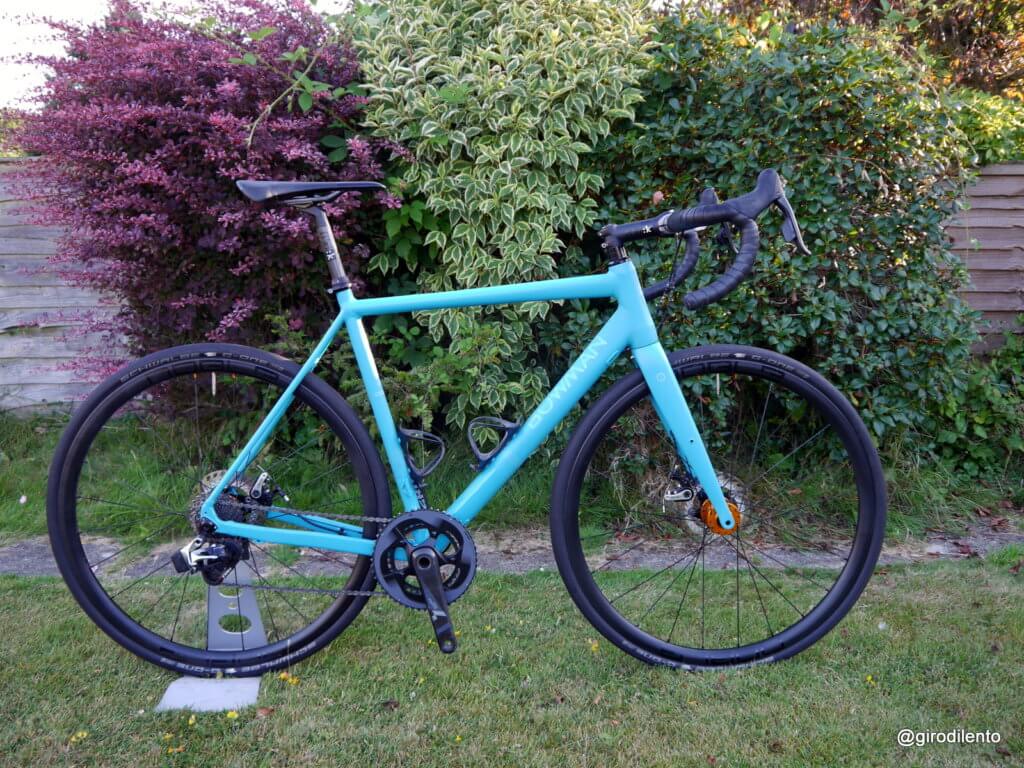 As mentioned in the linked post, I happen to ride the same size frame as founder Neil Webb and once again he’s very kindly loaned me his bike to ride for a week or so. If you’ve not already seen them, Neil has a vlogging channel for Bowman and my visit to collect his bike features in the latest series. You can see me looking incredibly uncomfortably on camera below:

One of the useful things about the visit to Bowman to collect the bike was getting a frame out and weighing it (at about 9m40s) at 1460gms for a size 56cm (around 250gms heavier than a Palace:R of the same size). The fork weighed in at  about 430gms and together that’s just over 300gms to go from caliper to disc brakes. As I pointed out on the video, one of the advantages of alloy is that if you choose steel you’re likely looking at around 1.8kgs-ish just for the frame. What’s also interesting about the weight is that when I wrote about the Cannondale Synapse launch, Cycling Weekly published some weight data that said that a Trek Domane SLR frame in size 56cm weighs 1430gms and it costs a lot more than the £795 of the Bowman for a frameset. In fairness, there’s some other clever engineering in the Trek, but this is to show that the Bowman’s weight is very respectable indeed. Neil’s complete Pilgrims Disc with my Shimano Ultegra carbon pedals and Garmin mounts etc, weight in at 8.37kgs on my scales. 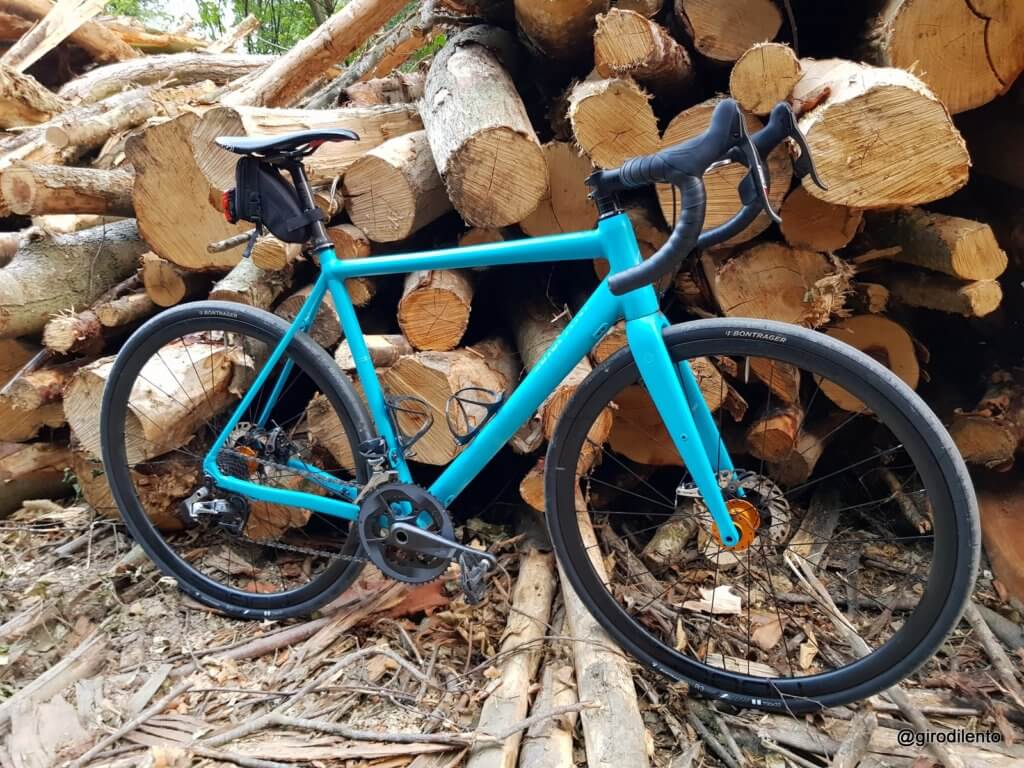 However any bike is about fair more than just weight, how it rides, handles, copes with the bumps and if it puts a smile on your face are all part of working out if it’s a winner or not. 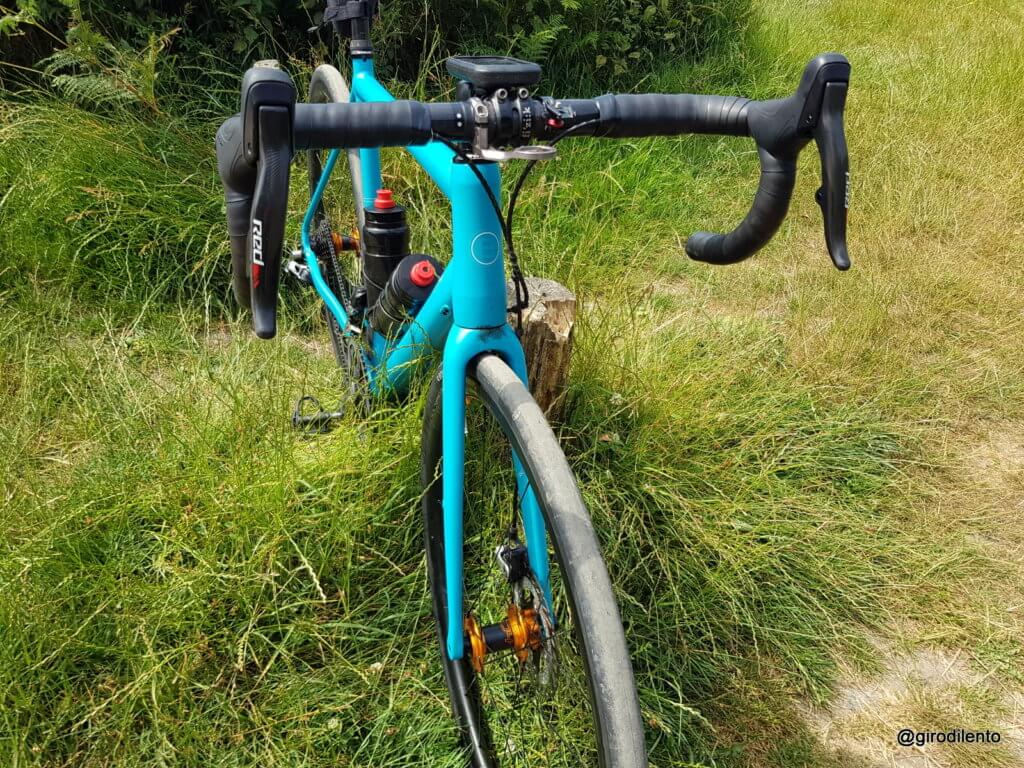 To help figure that out, I managed three rides in about a week. A 60km solo ride to begin with that was moderately hilly and covered plenty of rough road surfaces and inclines of varying steepness. The second ride was an easy 30km with my son and the final ride was a 90km club run, parts of which were pretty quick indeed. Whether or not you feel that’s enough for a review is up to you. For me, the initial ride told me a lot and the subsequent rides reinforced that view. 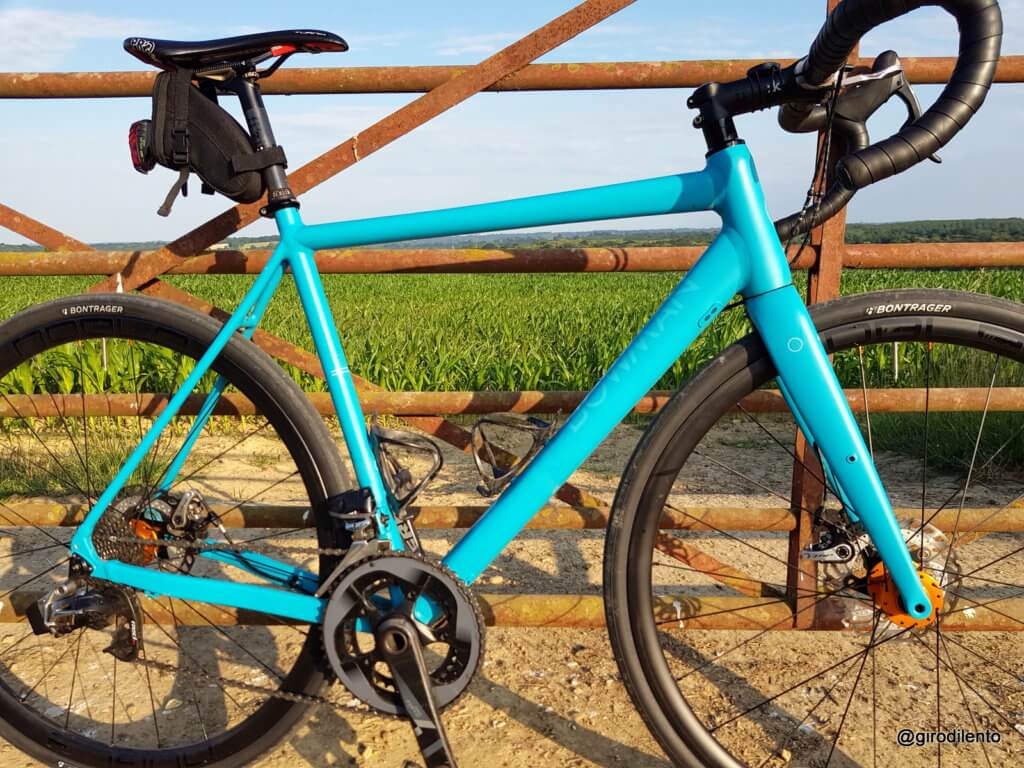 It’s my view that Neil from Bowman “gets” bikes and the evidence both from my experience of riding Bowman bikes and reviews from other sites support this assertion. The Palace and Palace:R have both won Road.cc frameset of the year and the Pilgrims Disc takes the same tubeset from the Palace:R but built into a slightly more forgiving shape, with added clearances and disc brakes, which to me always sounded like a compelling proposition. The original Pilgrims featured the same geometry but without the through axles and flat mounts and was also built for stiffer tubeset (as used in the Bowman Foots Cray), which gave a less forgiving ride. This new tubeset makes for a completely new experience. 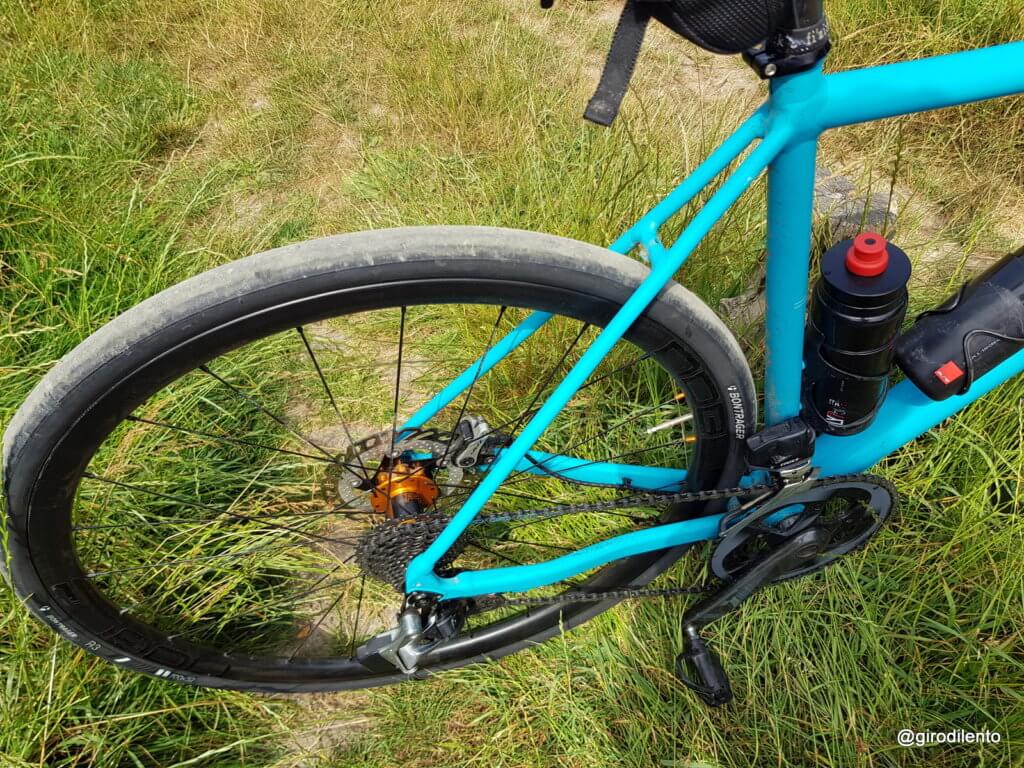 I’m a big fan of modern endurance geometry where you get disc brakes, wide tyre clearances, a slightly shorter reach and taller stack, also probably with a touch slacker head angle than a race bike. When done well, an endurance bike will be fun, nimble, fast but probably also more versatile & comfortable & I think that these are the style of bikes that most of us should be riding.  Almost all of the fun of a race bike in a more forgiving and versatile package that can handle everything from a flat-out club run, to an audax, to a bit of off roading. On paper, I thought the Pilgrims Disc geometry is about spot on, although Neil has told me that he didn’t start the design process thinking of creating a great endurance geometry but rather he started with the Palace geometry and thought “how can I take this and make it a great road plus bike?” As it happens, he’s ended up with something that delivers on both objectives. Whilst I was riding Neil’s bike on the road, Bowman ambassador Marta was riding her standard Pilgrims Disc to 4th in class at Grinduro in Scotland to prove the point perhaps. 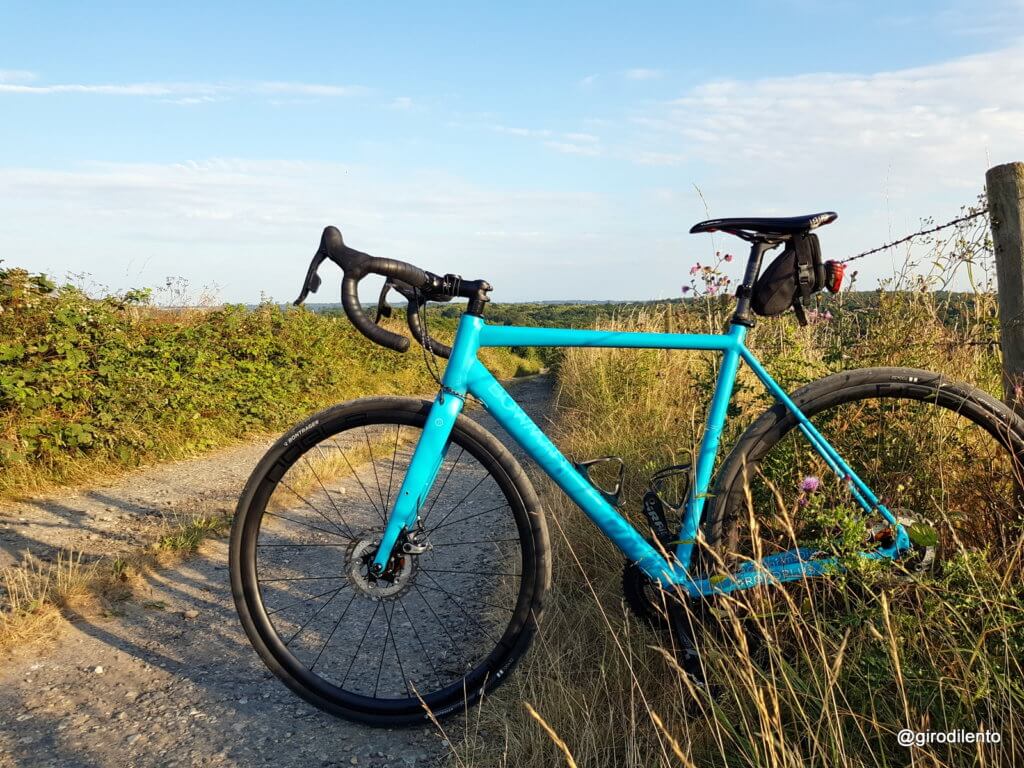 The fine geometry translated into a great handling bike on the road. The Pilgrims disc also climbs and descends well. The 6069 tubeset gives a firm pedalling platform that responds well when you urge it on – whether that’s up a steep climb or on the flat. The British Standard bottom bracket design is a big tick as well and whilst the bottom bracket area isn’t perhaps as oversized as some carbon frames, I certainly couldn’t detect any flex or lack or urge. 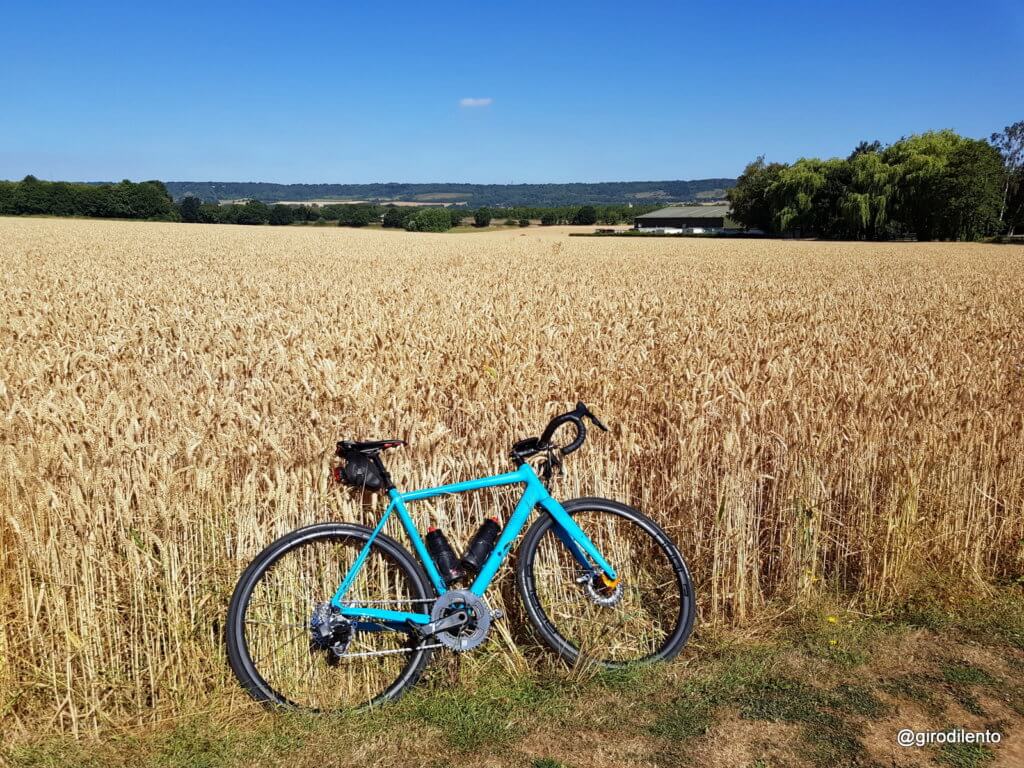 One of the things I like about disc brake bikes, is that once you switch to discs you can ride your best carbon wheels all year round. You won’t wear the rims out if you ride them in all weathers. Neil’s own Pilgrims has a set of Noble carbon wheels that were another enjoyable part of riding the bike. Once you have a good set of wheels you’ll most likely just swap tyres for different uses/situations. 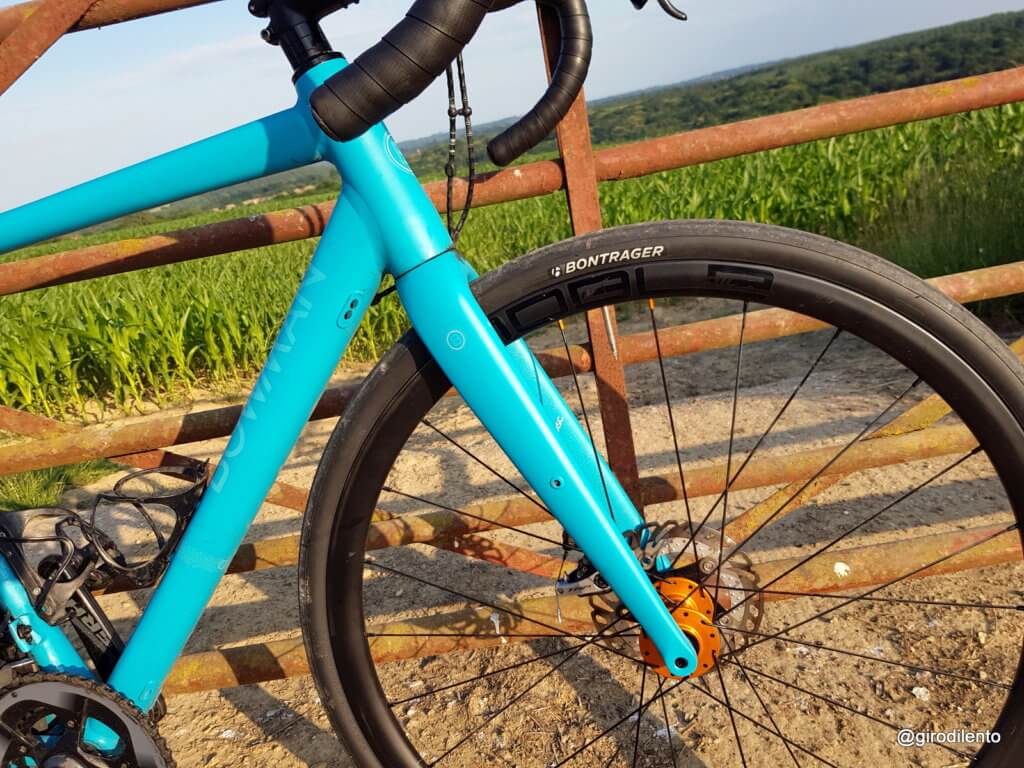 With the Pilgrims Disc, to begin with, I swapped out Neil’s 30mm Schwalbe G-One 30mm to see if my Bontrager R3 32mm tyres would fit …. and they did, so I used them for the first 60km ride. For rides two and three I swapped to Continental GP4000s II’s in 28mm width, which gave the bike a slightly firmer and more exciting ride but also because 28mm will likely be the choice for many riders when using mudguards during the wetter times of the year. The Pilgrims Disc rode very well with either width. 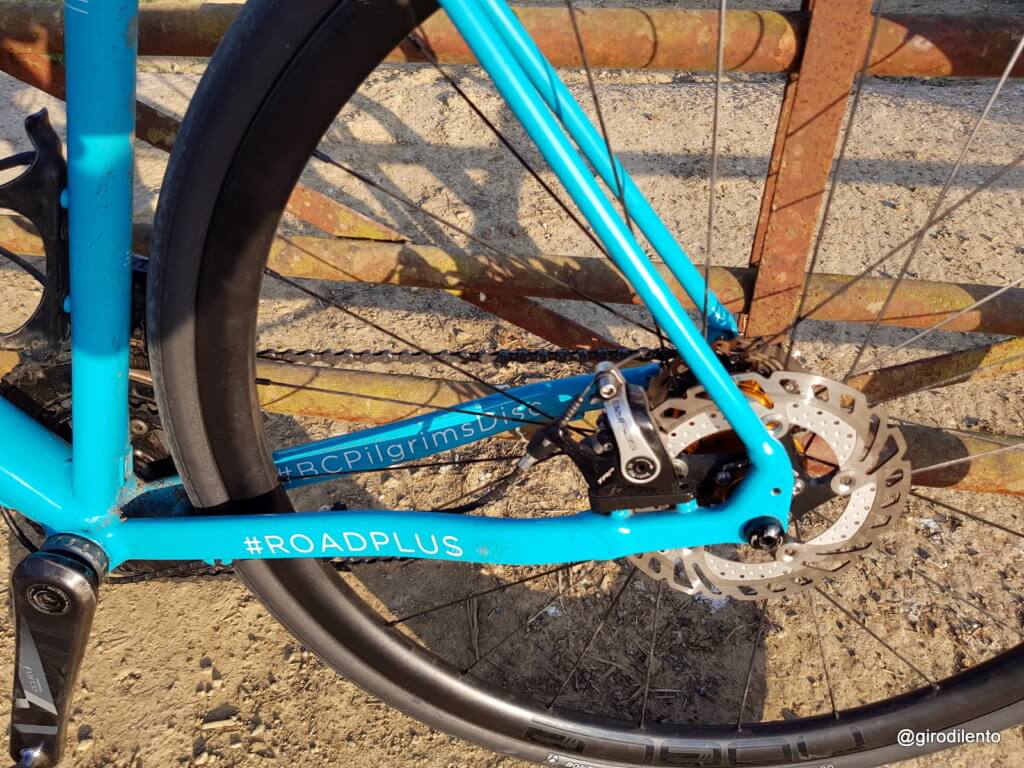 The Pilgrims Disc is available in two colourways. The one I had was a Teal blue but there is also a black version if you’d prefer that. I found the teal a little marmite in that most people really liked it but a few were very negative. Certainly there is no doubt that the Teal is very photo/Instagram friendly. Speaking of Instagram, the chainstays have hashtags on them already. It’s not an aspect of the graphics that I personally liked but all of the rest of the branding on the frame is nicely subtle. One smart aspect of both colour schemes is that the parts of the frameset towards the top of the frame that won’t get so much dirt/oil etc on them are a matt paint finish and the parts that do get dirty like the chainstays, the inside of the fork and the bottom bracket have a gloss paint finish to make them easier to clean. It’s a nice detail. Regardless of which colour you choose, the built-up Pilgrims looks good – the frame design – looks “right” and almost everyone who saw the bike remarked on it’s good looks. 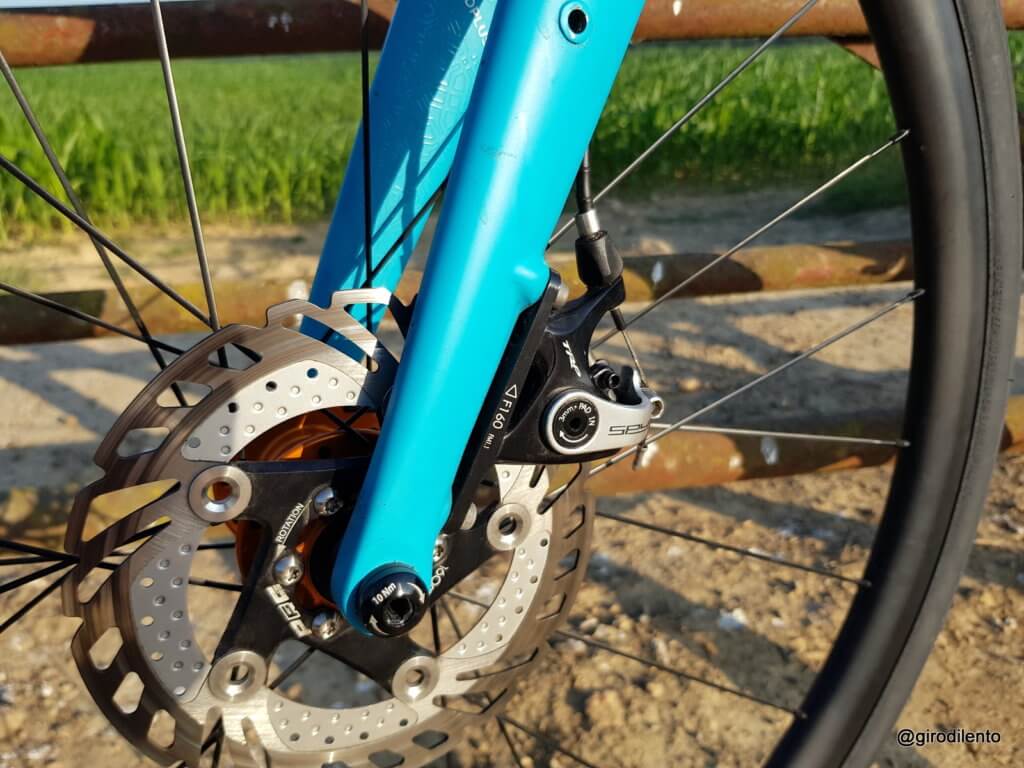 One of the other successes of the Pilgrims Disc is that in making the switch to through axles front and rear, the bike hasn’t sacrificed ride quality or feel. The bike takes the extra rigidity that they bring but it still feels light lively and comfortable. I enjoyed the feel of the Pilgrims Disc over a variety of road surfaces. It got a bit bouncy on some rough gravel but on the road it worked well and the through axles helped keep the bike “together” over rougher tarmac surfaces. The fork also gives a good ride quality as well as contributing to the good handling. Of course using “fatter” tyres helped a lot but the ride feel through the seat of your pants and hands was really pleasing. Lively and communicative in a way a good alloy frame is (and that some carbon frames, particularly at the cheaper end of the market aren’t). It’s yet another good advertisement for choosing a good alloy frameset – especially when you can build it up to a sensible weight and have a bike that feels light when you’re out riding it. 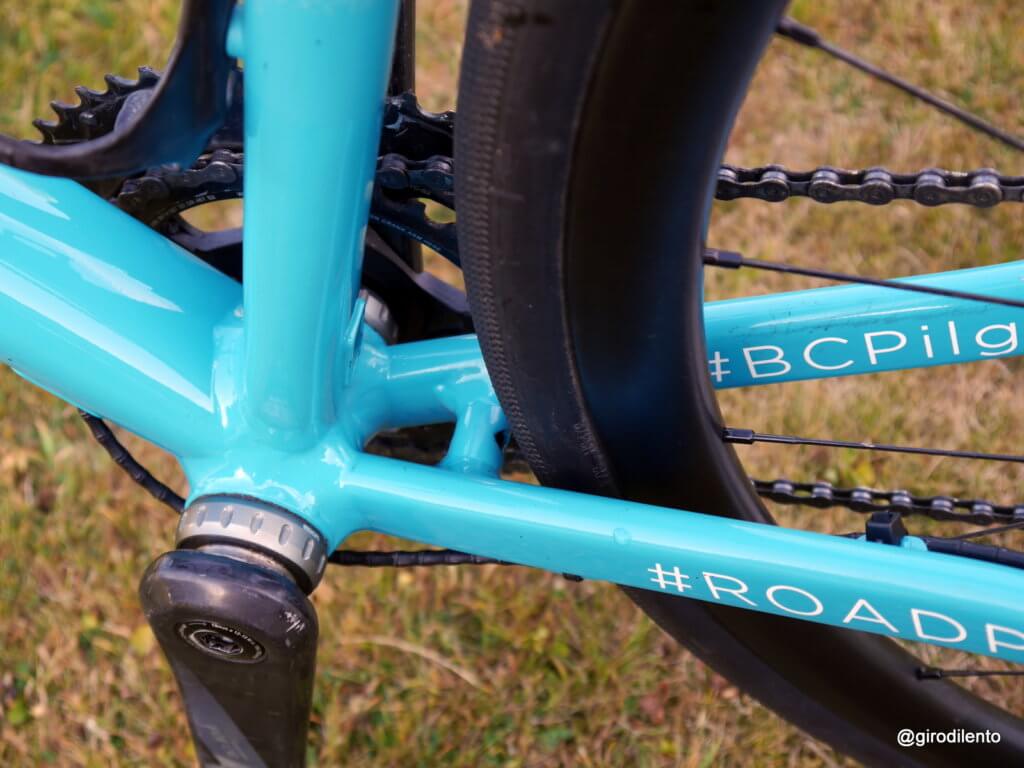 Considering the price of £795 for the frameset, making the leap to a good disc brake bike doesn’t have to cost the earth. You’ll need some good wheels and Neil reminded me of the old adage of spending in thirds. A third for your frameset, a third for your wheels and a third for your groupset. However it is possible to shop around and get a decent set of alloy disc brake wheels from around £300-ish (e.g. these Cero wheels were £299 at the time of writing). There are plenty of wheel brands to check out and you can get also easiliy get a decent set of carbon disc wheels for less than £1,000. If you have a caliper brake groupset, you can also use that too – just add a set of cable disc brakes like TRP Spyre’s to work with your caliper shifters. In fact Neil has done exactly this with the bike he loaned me – using a caliper brake SRAM Red eTap groupset with TRP mechanical disc brakes. When you start thinking of components you can re-use, you might be surprised that you can make the leap to bike like a Pilgrims Disc for less than you think. 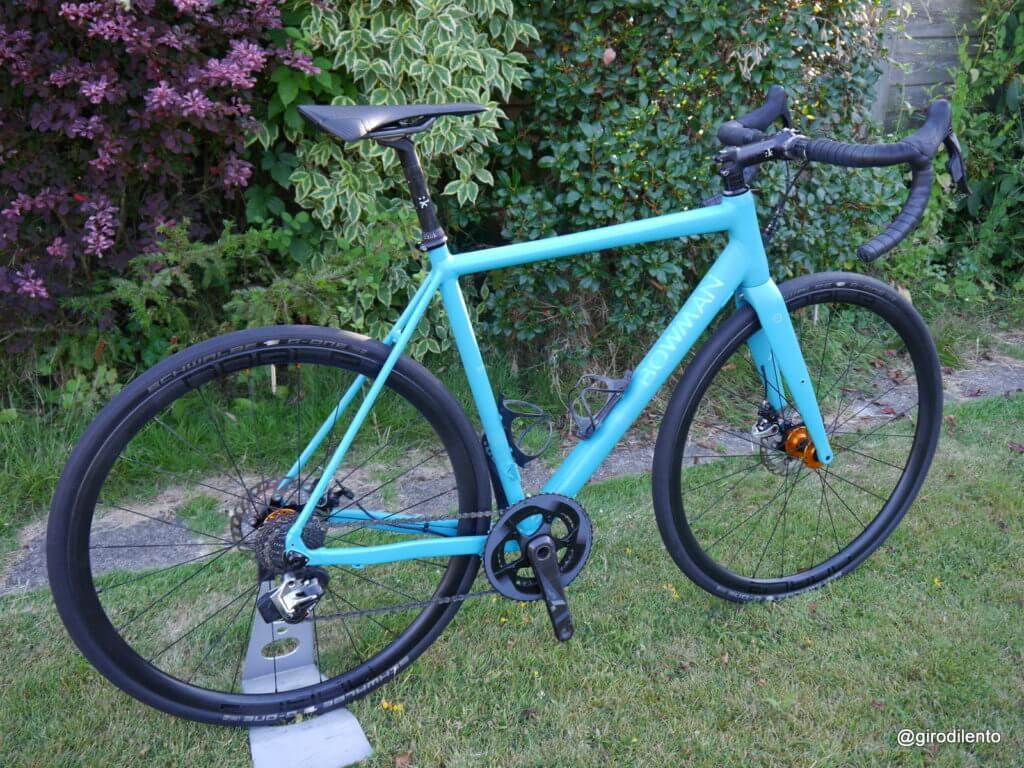 Bowman don’t offer full builds so you’ll have to choose components yourself and find a local mechanic or shop to build the bike if you can’t or don’t want to do it yourself. The Bowman team will help advise or guide you as they can and that could include recommending a local bike shop. 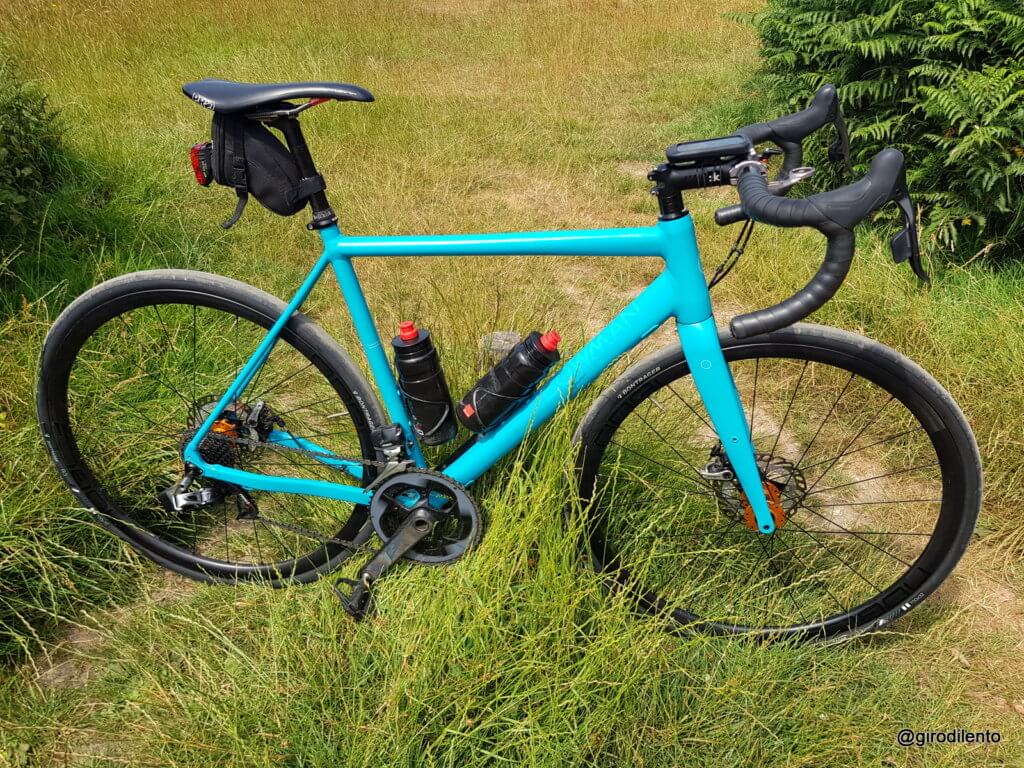 For me the perfect build would include new Ultegra Di2 with hydraulic disc brakes and some mid-range carbon wheels like Reynolds Assault Disc (or similar). I do already have a Ultegra 6870 Di2 caliper brake groupset I could use with a few updates. I don’t own any disc wheels though… yet. 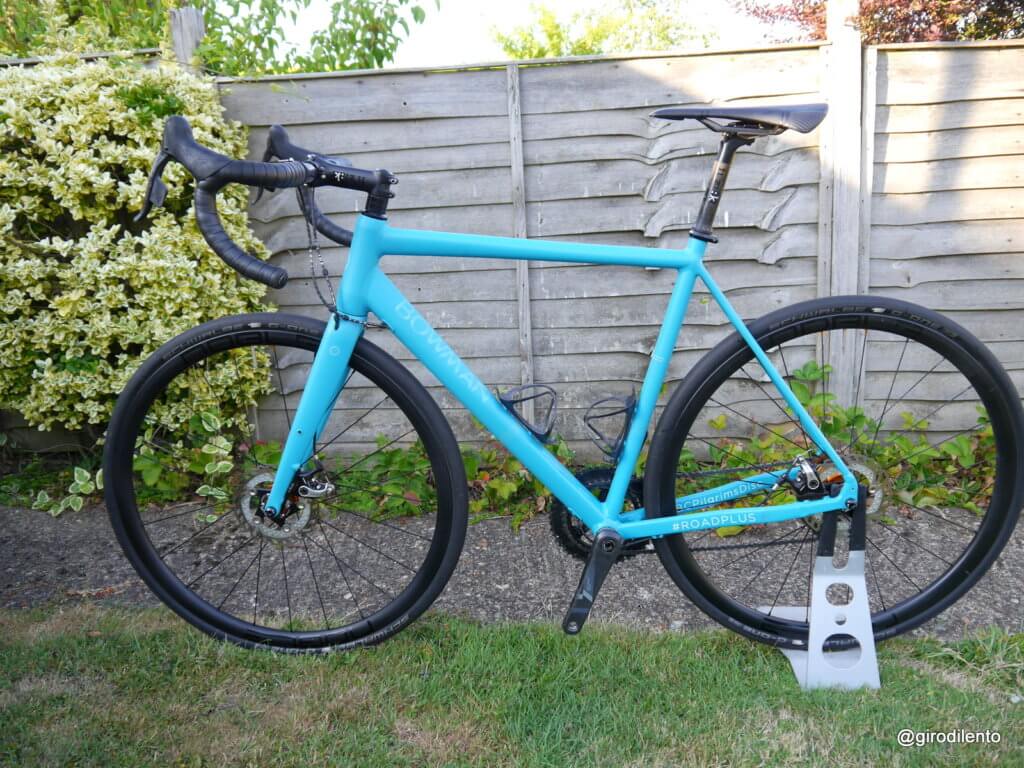 During this short review, I mainly rode the bike on the lanes of Kent, which is where Bowman originate from. By chance on my club ride with the bike, I did actually ride on a small part of Pilgrims Way, where the bike takes it’s name from. As I was out riding I did enjoy the fact that if you decide to buy a bike from a brand like Bowman, you’re supporting a small company with passionate people trying to build the best frames they can for a sensible price. I know that’s not something that matters to everyone, but I like the idea of supporting people like Neil and companies like Bowman and I’m not ruling out placing an order myself. I enjoyed the Pilgrims Disc that much and it would give me a more versatile bike than I have currently. 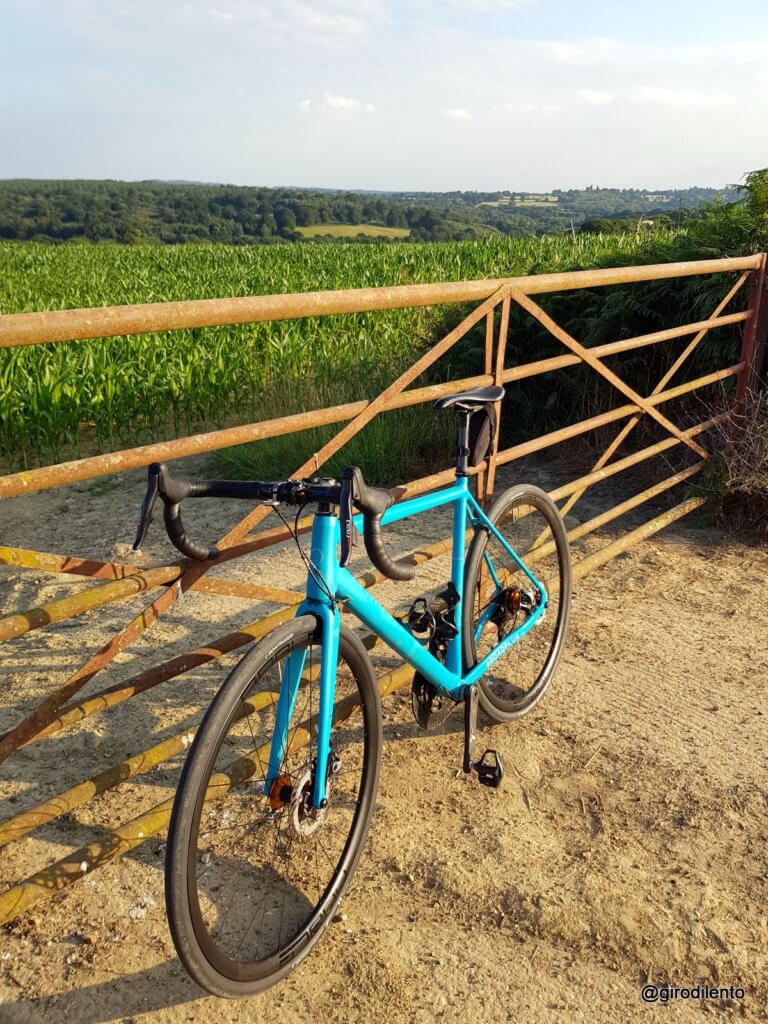 The Bowman Pilgrims Disc is a modern endurance geometry bike that takes fat tyres (e.g. 32mm), has disc brakes, through axles and is lively, fast & fun, whether you’re on a quick blast or all day Audax. If that’s the kind of bike you’re looking for either as an addition to your stable or as a one day to do it, it’s a great choice & I thoroughly enjoyed my time riding it.

Find out more at: https://bowman-cycles.com/products/pilgrims-disc 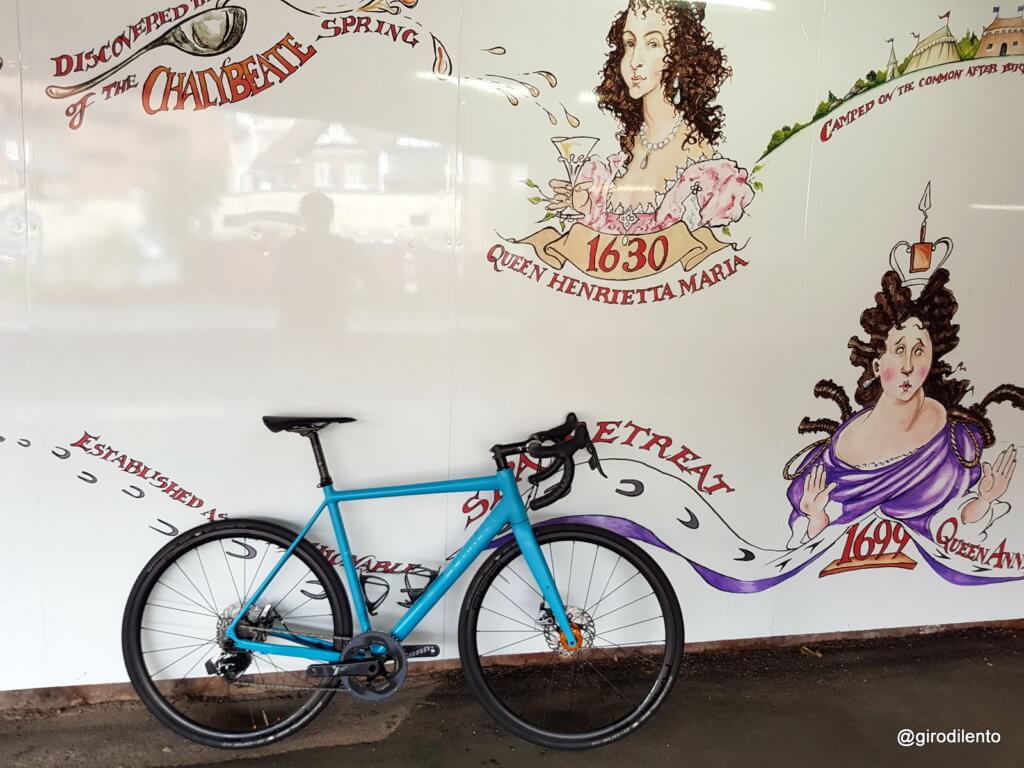 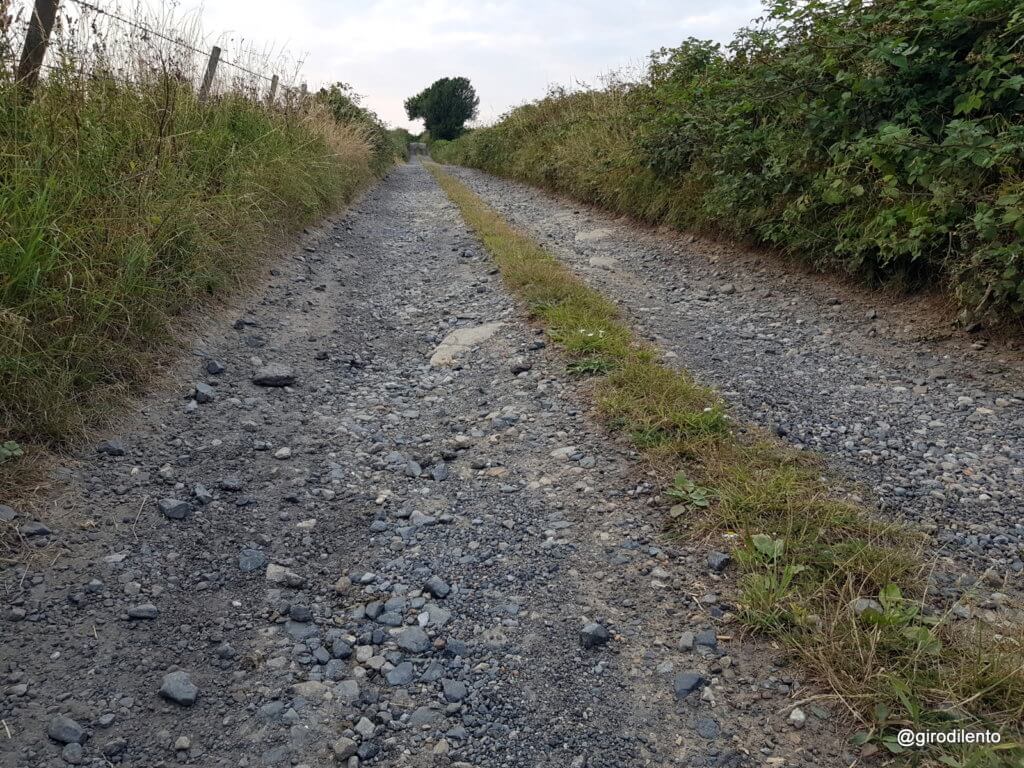