Launching Zwift on Apple TV is big news for the company because it brings a lower cost path to big screen “Zwifting”. It’s very rare for anything to do with Apple to be considered cheap but in this case, it’s a key aspect.

With the release of the new Zwift tvOS app, it’s now possible to go big screen zwifting for less – you no longer need a dedicated gaming PC for 4K Zwifting. Even if you don’t have a TV to use, shopping for a big screen and an Apple TV is cheaper than also having to buy a gaming PC. So there’s now a simple and affordable path to riding on Zwift in front of a large screen.

It’s also a lot smaller. The Apple TV 4K is only 35mm tall (1.4 inches) and 98mm deep and wide (3.9 inches) so it won’t take up much space either. It’s likely much less smaller than any gaming PC including the popular Alienware Alpha R2. It’s a lot cheaper than the Alienware too, with the 32GB Apple TV coming in at £179 and the Alpha R2 starting at £750. You can buy a pretty decent 4K TV for the difference (for example this 50” Samsung 4K TV with a 6 year warranty), with enough money left over to buy a decent stand for it. 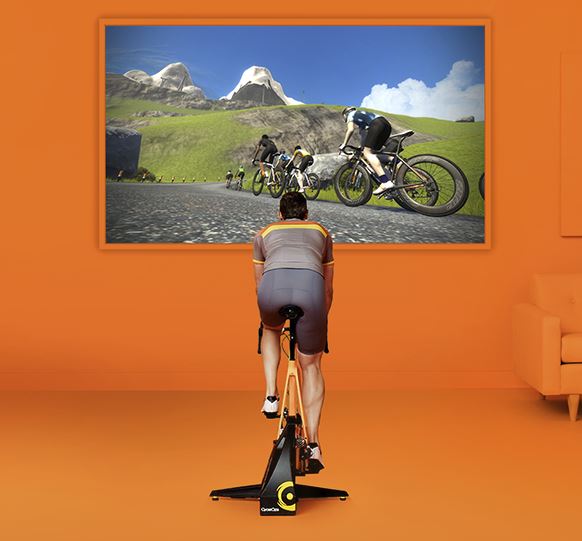 So what’s the catch?

The catch is that even the new 4K Apple TV doesn’t have enough “horsepower” to run Zwift in all it’s glory in 4K. The hardware inside the 4K Apple TV only outputs the Zwift graphics in 4K resolution, all of the actual “gameplay” is in 1080P (HD) and then it’s scaled up to the higher resolution. The Apple TV version also loses the shading in the game, so it’s a trimmed down Zwift visual world to reduce the demands on the hardware. However by all accounts it runs very well and looks pretty good. It’s just not as good as if you connect up a mid to higher spec gaming PC, but obviously something has to give for the price point. Think of it as more iPad quality Zwift visuals on a bigger screen. I’ve spent most of my time riding Zwift via an iPad and I’ve been very happy with the experience.

There is also a limitation in that you can only connect two Bluetooth devices to the Apple TV. However if you have more than two, you can pair more to your mobile via Zwift Mobile Link.

The only other catch is that right now, Zwift is the only app on the Apple TV Platform. So unlike on your PC, or even your iPad where you can run Zwift, Trainerroad, Sufferfest, and other apps on them, at the present, the Apple TV is a one app piece of kit. However, whilst it’s possible that some of those other companies will look seriously at releasing Apple TV apps too, Trainerroad have told me that Apple TV is not on their product roadmap right now. If you buy your Apple TV for Zwift and are fine with that being the only app you can use it with (with a dedicated app), then any future announcements will be a bonus.

Zwift and Apple TV will bring more people to the platform

Given that most of us already have a decent TV, this is a really good move by Zwift. For £179, you can jump into a much larger and more enticing experience on the Zwift platform. For many people it’ll be enough in terms of quality and that’s great. For those who try it and decide to switch to a gaming PC for an even better experience, it’s likely that they’ll still continue to get lots of use from their Apple TV anyway.

My personal belief is that it’s going to make a significant boost to the number of people riding Zwift this Northern Hemisphere winter with many of them also on a new 4K TV. I could well be one of them.

I look forward to seeing new riders out on the virtual roads of Watopia soon and well done to Zwift for launching the new app.

Find out more about Apple TV with Zwift here: https://zwift.com/appletv 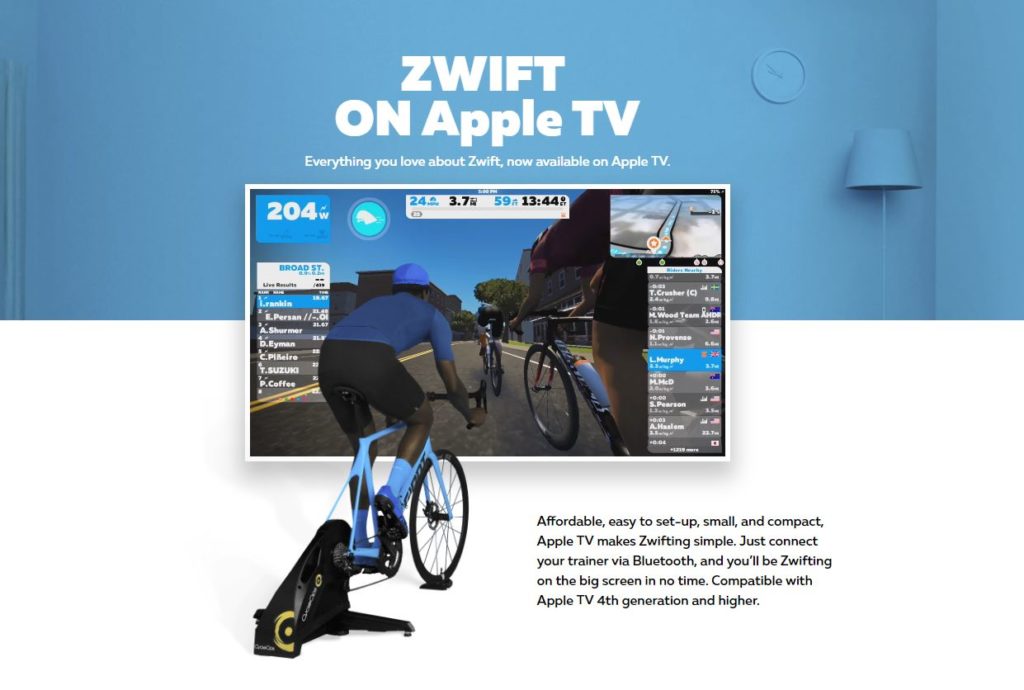 If you’d like to learn more about ways to upgrade your Zwift experience, then please check out this upgrade guide here